How Purpose is Driving Crazy Good Change in the Consulting Industry

International students make a net contribution of £2.3bn a year to the UK economy in London alone and support 70,000 jobs in the capital, according to research published just as ministers are considering stricter visa curbs.The study, carried out by economists at the consultancy PwC and the business lobby London First, comes at a time of uncertainty for universities, which rely heavily on overseas students to boost research income. However, they are anticipating further reforms to the visa system as the Conservative government revives its aim of cutting net migration by more than two-thirds to meet its “tens of thousands” target.
Researchers found that international students in London contribute £2.8bn a year to UK gross domestic product through tuition fees, subsistence spending and income from visiting friends and family members. This is offset by an estimated £540m cost to public services, such as the NHS, of their stay in Britain. Foreign students, however, have no recourse to welfare benefits and do not compete for housing with other Londoners.
Despite Home Office concerns about students overstaying on their visas, the report calculates that only 12 per cent of foreign students remain in the UK after they graduate. Those who do are earning average salaries of £19,000 and contribute £9m a year in income tax and £17m in national insurance payments. Julia Onslow-Cole, head of immigration at PwC Legal, said there had been a “dearth of data” about the value that foreign students bring.“Our report blows out of the water any suggestion that their effect on the economy is marginal,” she said. At a time when ministers were looking for growth, they would not want to “choke” successful sectors such as higher education. “A strong economic recovery will provide a solid basis to tackle wider immigration concerns,” Ms Onslow-Cole added.

According to the report, the benefits of attracting foreigners to study in London spread beyond the Exchequer: 60 per cent of students said they were more likely to do business with the UK as a result of studying here.But the difficulty of navigating the immigration system also prompted some negative responses from those surveyed. More than a third of overseas students said problems with visa applications had undermined their experiences of studying in the UK, and many of them complained about the difficulty of securing a visa to work here after graduation. 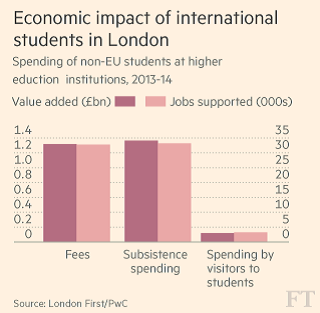 Baroness Jo Valentine, chief executive of London First, said she was concerned that visa restrictions — such as the end four years ago of the post-study work visa — were “turning people off” coming to the UK. “We remain opposed to the net migration target, on the grounds that it is manifestly just a number,” she said. “It is not founded on any sort of analysis of what the net situation has been and should be . . . The endgame needs to be valuing students who want to come here for genuine reasons and contribute in many ways to higher education, but are absolutely vital to [the UK’s] long-term relationship with the rest of the world.”Under the coalition government there was a bitter dispute between Tories in the Home Office and Liberal Democrats in the Department for Business, Innovation and Skills over whether overseas students should be included in the net migration figures. While Theresa May, the home secretary, has consistently fought to keep students in the target, Jo Johnson, the new universities minister, argued three years ago that Britain should follow the example of Australia, Canada and the US in classifying students as temporary immigrants.

This is likely to be a difficult battle, however. The Tories have already promised in their manifesto to “reform the student visa system” with measures to tackle abuse, and “clamp down” on universities outside the capital which are opening satellite campuses in London to attract more overseas students.Responding to the research, James Brokenshire, immigration minister, said it was right to include students within the net migration figure because “all immigrants who are in the UK have an impact on our communities, on housing and on our public services”.
He added: “The latest Office for National Statistics estimate shows that while 133,000 non-EU students came to Britain in the last year, only around 48,000 left the country — a gap of 85,000. The government will pursue further reforms to tackle abuse while continuing to attract the brightest and the best to our world-class universities.”