How International Students Benefit From Going To College In America

What’s a Brand Worth? Evidence From the Gulf 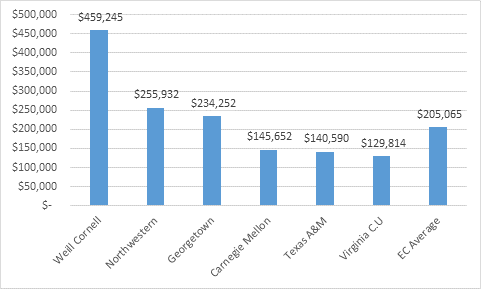 Then, there’s the gold-plated prestige campuses of the Persian Gulf.   The Emirate of Abu Dhabi, for instance, pays both New York University and Paris-Sorbonne to have campuses on its territory (both institutions also get to charge significant tuition fees, some of which may be covered by the Emirate through scholarships).  The actual amount the Emirate pays each on an annual basis is not known, but New York University received a $50 million from the Emirate before even considering opening a campus there (the physical campus, of course, was fully paid-for by the Emiratis).  But to get a sense of what the ruling Al-Nahyan family sees as good value, Abu Dhabi agreed to pay the Louvre over $1.25 billion over 30 years (or $40 million/year) to set up shop on Saadiyat Island.

The other Gulf Nation that has pursued a strategy of getting big-name foreign universities to set up shop on their territory is nearby Qatar, which rivals Abu Dhabi as the region with the highest levels of hydrocarbon wealth/reserves per capita.  Nearly 20 years ago, with help from the RAND corporation, the ruling al-Thani family’s Qatar Foundation established something called “Education City” on the outskirts of Doha.  The idea was to create a world-class educational facility by inviting top US universities to come in and each run one faculty.  So Virginia Commonwealth was invited to set up a visual arts school, Georgetown came in to run the school for the foreign service, Weill Cornell did the medical school, Northwestern came for the J-school, Texas A&M for Engineering and Carnegie Mellon for Business and Computer Science.

As with NYU and the Sorbonne in Abu Dhabi, this wasn’t your typical branch-campus arrangement.  These institutions were not over there to make money by offering degrees for high prices.  Rather, the Qatari Royal Family was paying them big dollars to educate their students in situ. The universities themselves had nothing at risk: each one received its own gorgeous building fully paid for by the Qataris.

But exactly how much the six universities received for their work was unknown until the Washington Post published a fascinating article on March 8.  The Post was able to obtain actual contracts from VCU and Texas A&M , and claims to have been able to calculate the sums paid to the four private universities using tax records and Department of Education data. It’s not 100% clear if WaPo is actually able in the latter cases to separate income from the Qatar Foundation and income from tuition fees, though given the Foundation’s scholarship policies, but given the way the Foundation distributes scholarships, there may not be a lot of difference between the two.

As it turns out, the Qataris are collectively paying these six schools, just under $405 million per year to operate their Doha campuses.  Weill Cornell rakes in the most (not a surprise since it’s a medical school) at $121.7 million, and Virginia Commonwealth the least at $41.8 million.

On their own, these are eye-watering figures.  But to truly get a sense of how insane this is, you have to look at what this translates to in per-student terms.  These are actually pretty small operations – according to the data I was able to piece together the six campuses collectively only educate about 2000 students.  So the actual expenditure per student is actually just over $205,000. There is a technical term for what these six universities are doing here: it’s called “making out like absolute bandits”.  Free buildings, six figure per student incomes it’s basically higher education heaven.  But the question really is what on earth possessed the Qataris to pay this kind of price?

For the sake of comparison, It’s instructive here to look at what the Qataris are paying Newfoundland’s College of the North Atlantic to run their community college a few kilometers away from Education City.  It’s the same deal – Qataris built the campus and pay an annual fee to CONA to run the place.  Details on the most recent CONA contract are scarce, but the college’s ten-year contract from 2003-2012 was worth $500 million so let’s just say it’s worth $50 million/year (the CONA Annual report gives figures in the $10-11M range, that appears to be profit not operating).  That sounds similar to the American schools, except that CONA educates more students than all the Education City campuses combined – roughly 3000 in total.  On a per-student basis that comes out to be $16,500 or so per year – or about an eighth of what the cheapest institute at Education City is getting.

While that’s not a bad deal for CONA (back home, the college receives about C$84 million ($US64.3 million) from tuition and provincial grants-in-aid to educate its 8888 students, which comes to about C$9,400/student ($US7,200), and obviously there are some differences in delivery costs for college and university programs, but they aren’t thatbig.  Georgetown’s campus is a pure social sciences operation, and you have to work really hard to make those cost more than $30,000/student.  So where’s that extra money buying?

Well, student amenities, partly.  These places are like little educational wonderlands (do check out Georgetown’s student life page).    But mostly, this is pure rent; unlike some Canadian community college which is merely competent at delivering vocational , these six American institutions have global prestige.  And that in a nutshell is what the Qataris are paying hundreds of millions a year for – the right to be associated with these institutions’ prestige.

That’s what brand is all about.  And apparently, it’s worth up to a couple of hundred thousand dollars per student.  Nice work if you can get it.