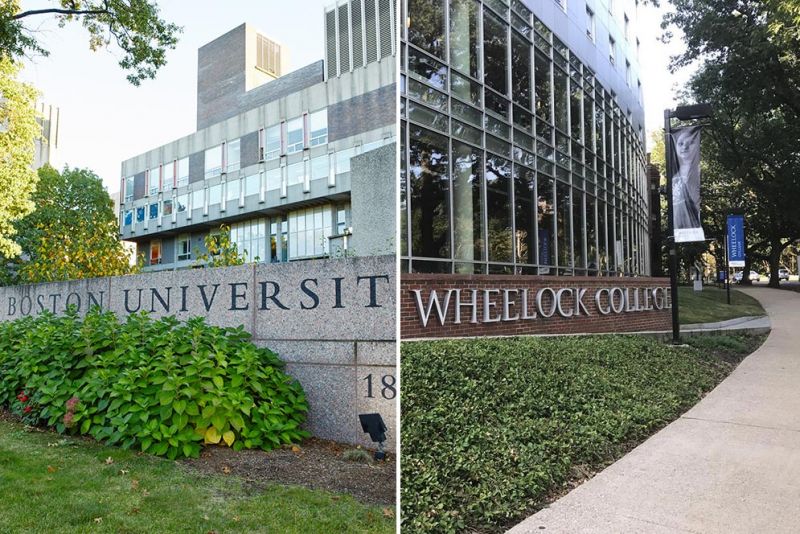 Boston University and Wheelock College have started formal discussions about merging, they announced Tuesday, a step coming after Wheelock evaluated its future this summer in the face of financial and enrollment pressures.

The two institutions’ campuses sit about a mile apart. But a combination would would mean Wheelock merging into BU, not a merger of equals. Wheelock is a small private college that enrolled 726 undergraduates and 327 graduate students last fall and reported an endowment of $53.9 million in 2015. Boston University is a large private research university that enrolled almost 18,000 undergraduates and 14,751 graduate students last fall and had a $1.65 billion endowment in 2016.

Merger talks follow a planning process this summer by Wheelock administrators, staff members and trustees, the college said in a statement. The college is trying to find a sustainable way to continue its mission in a changing higher education industry, it said.

Neither Boston University nor Wheelock shared a timeline under which the merger talks will progress. They issued a joint statement but said they would not provide additional details for the time being.

“Over the upcoming weeks the leadership of Boston University and Wheelock College will be working with our faculties and our academic and administrative leaders to shape the vision of our merged academic units and services,” the joint statement said. “We believe the merger will enhance Boston University’s programs, as well as preserve the mission of Wheelock College to improve the lives of children and families.”

Wheelock has three schools focusing on education, social work and arts and sciences. BU has 16 schools and colleges that include education and social work programs.

Chard wrote that Wheelock’s administrative and operational functions would be integrated into BU. Operations would be “right sized” as necessary to realize cost savings associated with a larger university.

“This potential partnership with Boston University will allow us to preserve Lucy Wheelock’s vision and continue to educate leaders who improve the lives of children and families while building a sustainable future for Wheelock College,” he wrote.

The college tracks its history and founding in 1888 to Lucy Wheelock, a pioneer in early childhood education and kindergarten teacher training. She is also noted for having her students study poor immigrant families in Boston neighborhoods.

Chard is a relatively new president at Wheelock — he took over as president there in July 2016. But when he was offered the job, trustees told him that they were concerned Wheelock, with its history as a small institution with a narrow mission, could not offer students the kinds of experiences they could find at other four-year institutions.

“We don’t have a gym on campus,” Chard said in an interview Tuesday. “We don’t have the luxury of a lot of things you find on a lot of large institutional campuses. Well before they hired me, they had started conversations with local institutions about possible partnerships.”

Those conversations were put on hold when Chard was hired. But college leaders saw challenges enrolling students in the Northeast. That was particularly true for a private college focused on teacher education, a field that does not offer high salaries to graduates.

Conversations started in December about strategic options. They progressed to the point where Wheelock followed a request for proposals process seeking financially strong colleges and universities as partners. Boston University came out on top of that process, which netted six proposals.

Chard does not expect Wheelock to lose money this year. For the near future, the college could have planned on spending down its endowment to close budget gaps while trying to find a way to enroll more students. But leaders decided now was the time to make a change, when the institution was strong enough to be valuable to partners.

Wheelock was said to be weighing substantial changes this summer in order to position itself for the future. In June, The Boston Globe reported the college was trying to sell a dormitory and its president’s house. The college was also considering eliminating undergraduate degrees and had suspended freshman recruitment for 2019, the newspaper reported.

A Wheelock spokeswoman later denied the undergraduate changes, saying the college planned normal recruitment for 2019. But she confirmed the properties were up for sale.

Merging Wheelock and BU is logical geographically and academically, according to Richard Doherty, president of the Association of Independent Colleges and Universities in Massachusetts. Wheelock’s education and social work programs have a history of excellence and would blend very well with BU’s programs, he said.

Chard likely brought a fresh perspective to the college.

Doherty would not be surprised to see additional mergers in Massachusetts. It is the only state where more students attend private colleges than public colleges, he said. That means there are many small institutions. The Association of Independent Colleges and Universities in Massachusetts has 58 members.

Against a national climate where tuition discount rates are rising, net tuition is under pressure and increasing enrollment is expected to be challenging, institutions could very well be looking for new strategies.

“Merger activity or affiliation activity is quite new within higher education,” Doherty said. “I think we will end up seeing some more of that activity, just because of the pressures on very small, niche, focused academic institutions.”

Still, mergers are not an easy process. They raise hard-to-answer questions about institutional identity.

Reactions to the announcement on social media illustrate that fact. Commenters on Wheelock’s Facebook page argued the college’s identity is unique. One said she attended Wheelock because of its small school appeal.