U of Washington, Tsinghua launch innovation-focused programs as part of Microsoft-funded partnership 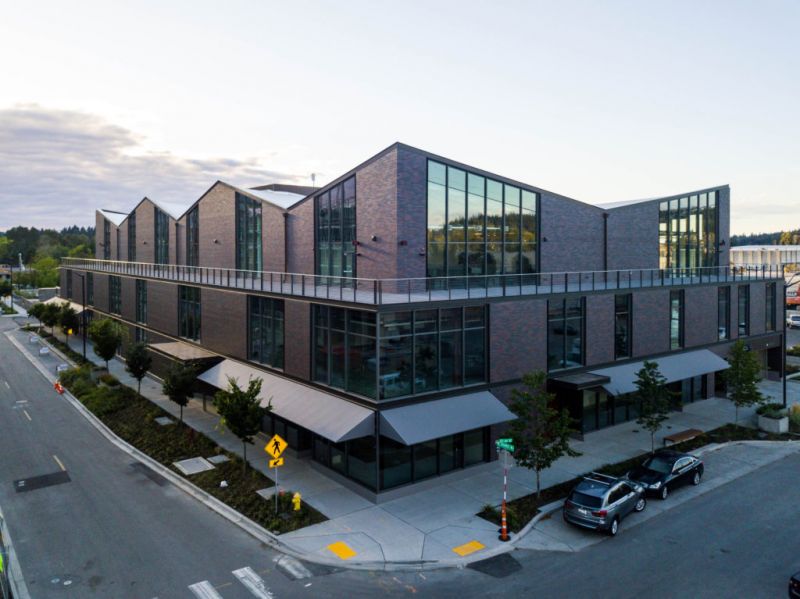 A new academic enterprise, born of a partnership between the University of Washington and China’s Tsinghua University — and seeded with $40 million in funding from Microsoft — welcomed its first class of master’s students this fall.

The Global Innovation Exchange, or GIX, opened in September in a new building in Bellevue, Wash., about a 10-minute drive from the UW campus in Seattle. It is enrolling 43 students in its first cohort across two programs, a 15-month master of science in technology and innovation (MSTI) offered by UW, and a 21-month program in which students spend an additional six months studying at Tsinghua and receive master’s degrees from both universities. Of the initial class, 22 students come from China, seven from the U.S., and the remainder from Canada, Estonia, France, India, Pakistan, Paraguay, Russia, Switzerland and Taiwan.

Although it is starting quite small, Vikram Jandhyala, GIX’s co-executive director, said the goal is to grow GIX to enroll 3,000 “learners” — a term he used instead of “students” to reflect a focus on executive training as well as traditional degree programs — within 10 years.

“Many American universities are trying to set up satellite campuses in different countries, especially in China,” said Jandhyala. “We wanted to invert that model.”

Jandhyala said Washington wanted to see how it could build on Seattle’s reputation as a hub for high-tech talent. “It gives us benefits because it connects us to the Tsinghua ecosystem and their connections as well,” he said. Tsinghua, which is widely regarded as China’s most elite technology-focused university, is based in Beijing.

Jandhyala said representatives from Tsinghua, Washington and Microsoft preside over GIX’s board, and the vision over the next 10 years is to add additional industry and university representation to the board. “The goal is to get two to three more universities as well as three to four more companies at that level,” he said.

Jandhyala said Microsoft’s $40 million in funding has gone toward construction of the new building — named after former Microsoft CEO Steve Ballmer — as well as operational costs over GIX’s first three years. Speaking to Inside Higher Ed in 2015 at the time the $40 million donation was announced, Microsoft’s now president, Brad Smith, said that the company hoped to contribute ideas for research projects as well as internships and mentors. “Ultimately, if GIX is a success, every company in every part of the technology ecosystem in Puget Sound will benefit from that success,” Smith said at the time. “It will add to the talent pool, it will add to the innovation energy” of the region.

In some ways. GIX is similar to the new Cornell Tech graduate campus on New York City’s Roosevelt Island, which is a collaboration between Cornell University and Technion-Israel Institute of Technology. Both are large-scale, international academic partnerships in which a foreign university has co-located with a U.S. university in a major city here in the U.S. In both cases the partnership between universities was made possible by an injection of resources from a third, nonuniversity entity (in Cornell Tech’s case, the city of New York, which did not offer money, but did offer land). Both have a focus on technology, innovation and entrepreneurship.

UW’s new 15-month, interdisciplinary MSTI program, which has a $54,000 sticker price — the 21-month dual degree program with Tsinghua costs $77,000 — is intended to teach students to “take an innovation from concept to development and launch,” per the description on the GIX website. Students take project-based courses in technology development, including hardware and software development, design thinking, and entrepreneurship.

For their culminating “launch project,” students “take an idea from concept to prototype and get a product ready for market” — either their own idea or one that comes from industry. Jandhyala said that industries will pay GIX up to $150,000 a year for the privilege of having its students work on their projects.

“They don’t control the curriculum, but the problems students work on come from industry,” Jandhyala said. GIX recently announced the first five members of its “industry consortium,” as well as an “academic network” of eight universities. Apart from the two primary academic partners, Washington and Tsinghua, the universities that have joined on are: École Polytechnique Fédérale de Lausanne, in Switzerland; Hong Kong University of Science and Technology; the Indian Institute of Science; Korea Advanced Institute of Science and Technology; National Taiwan University; the Technion, in Israel; Tecnológico de Monterrey, in Mexico; and the University of British Columbia.

Jandhyala said the idea is that the academic network universities will recruit students for GIX and can send their faculty members to teach or for short visits. He added that each of these universities has its own connections with industry that he hopes GIX can tap into.

Jason Lane is an associate professor and chair of the Department of Educational Policy and Leadership at the State University of New York at Albany, where he directs the Cross-Border Education Research Team. He said he sees GIX as part of a larger trend of countries “looking at ways to leverage internationalization for economic development, innovation and research.”

“We see a lot of developing countries importing campuses because they want to improve their R&D and innovation ecosystem,” Lane said. “This is the first time we’re really seeing — more explicitly here than in the Cornell example — but both of them are examples of importing the research infrastructure of another country into the U.S. to help build out our own innovation ecosystem, and contribute here.”

Source: U of Washington, Tsinghua launch innovation-focused programs as part of Microsoft-funded partnership