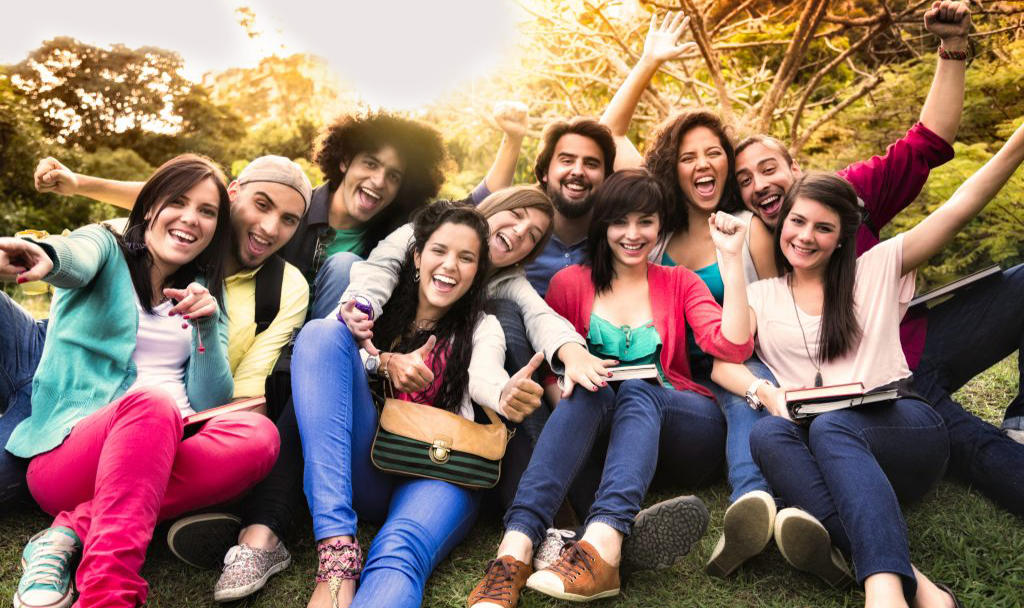 While there are lots of variables that affect international enrollments, the drop in new students comes at a time when many in international education have expressed fears that the rhetoric and policies of President Trump could discourage some international students from enrolling at U.S. institutions. Among institutions that responded to the survey, 68 percent cited the visa application process or visa denials and delays as a reason for declining new enrollments, up 35 percentage points from last year, and 57 percent cited the social and political environment in the U.S., up 41 percentage points from last year. Other factors cited included the cost of tuition and fees (57 percent of respondents also cited this) and competition from universities in other countries (54 percent).

However, despite the 7 percent drop in new international students, the overall picture for this fall is mixed and suggests a divergence of trends depending on the selectivity, type and geographic location of a given university.

While 45 percent of institutions responding to the snapshot survey reported declines in new international students, 31 percent reported increases and 24 percent reported no change. Of those reporting decreases in new international students, the average decrease was 20 percent. Of those reporting increases, the average increase was 5 percent. 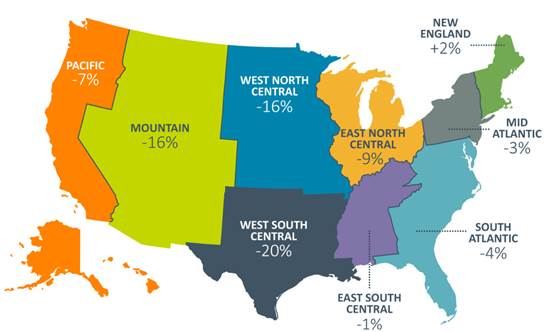 Declines in new international enrollments by geographical region this fall. Graphic courtesy of the Institute of International Education.

The “Open Doors” data, which reflect enrollments for the last academic year, not this one, show a 3.4 percent increase in total international student enrollments at American colleges and universities in 2016-17 compared to the year before, bringing the total number of international college students in the U.S. to 1,078,822.

Though a slowdown compared to the growth rates seen in the six years prior, 3.4 percent is still growth. However, what will be worrisome for many colleges is the fact that the number of new international students decreased for the first time in the six years that Open Doors has been reporting new enrollments, falling by 3.3 percent compared to the previous year.

Drilling down by academic level helps to explain the top-level trends. In 2016-17 the number of international students increased by a modest 2.7 percent and 1.9 percent at the undergraduate and graduate levels, respectively, and fell by 14.2 percent at the nondegree level — a category that includes intensive English programs, which many students enroll in prior to entering degree-granting programs.

The fastest rate of growth by far was in the number of students who are participating in optional practical training (OPT), a number that grew by 19.1 percent in 2016-17 compared to the prior year.

While individuals on OPT are classified as students for visa purposes, and remain on their university’s sponsorship, they are not really students at all in the traditional sense, as they have already graduated from their degree programs and are now pursuing employment. Under an extension of the OPT program that went into effect in May 2016, students with degrees in science, technology, engineering and mathematics fields can now spend up to three years working in the U.S. on OPT after they graduate (students with degrees in non-STEM fields are eligible for a one-year OPT term).

“What we’re really seeing is this sort of bulge in the system. A lot of students who began their studies in the U.S. have remained under the sponsorship of their institutions for longer because of the OPT extension, while at the same time the numbers of enrolled students haven’t increased at the same pace,” said Rajika Bhandari, head of research, policy and practice at the Institute of International Education, which publishes the annual “Open Doors” survey with funding from the U.S. State Department.

“Then when you add to this the finding on the drop in new enrollments, all of that put together really points to the fact that the numbers of international students coming to the U.S. are beginning to flatten. I would interpret this as by no means a crisis, but really more of a wake-up call where this is the beginning of a flattening trend and there’s a lot that institutions and others can be doing to still turn this around,” Bhandari said.

Top 15 Countries of Origin for International Students in the U.S.

Note, all the numbers in the charts directly above and below are for the 2016-17 academic year. For more numbers from this fall, read on to the next subhead.

International Students in the U.S. by Field of Study

The survey does not disaggregate the enrollment changes by country of origin, but 71 percent of institutions said they were concerned about recruiting students from China for next fall and 68 percent said the same about India. Seventy-six percent of institutions said they are concerned about enrolling international students from the Middle East and North Africa, a finding that IIE says is likely due to concerns about the reductions in the Saudi scholarship program and travel restrictions for the region. A third version of the Trump administration’s travel ban, currently halted by the courts, would bar all travel from North Korea and Syria and impose varying restrictions or higher vetting standards for travelers coming from Chad, Iran, Libya, Somalia and Yemen (it would also bar certain Venezuelan government officials and their families from coming on business and tourist visas).

New enrollments of international students started to decline last fall prior to the election of President Trump. But some college administrators are worried that the current political and social climate may contribute to keeping some students away. Hundreds of universities have joined a campaign aimed toward prospective international students called “#YouAreWelcomeHere” to counter concerns about xenophobia and perceptions about personal safety in the U.S.

“While it’s not a huge increase, I think any increase is very positive,” Bhandari said. “It’s a slow but steady growth, and I think it’s really encouraging considering in the past year or so we’ve seen so many global concerns around security and health issues and political stability and concerns around destinations like France and Brazil and Turkey. And despite all that, we have seen not only a growth, but a slightly higher rate of growth.”

Notable changes in terms of student destinations include a 5.4 percent decline in the number of American students going to France, which is perhaps attributable to the Nov. 15, 2015, terror attacks in Paris that killed 130 people — and that could well have dissuaded some students from enrolling in programs in France the following spring or summer. Though Turkey was never a top destination like France, the number of American students studying in the country, which has experienced a series of terror attacks since 2015 as well as a failed coup attempt in July 2016, also dropped, by a dramatic 62.7 percent.

The number of students going to Brazil, which was at the center of the Zika epidemic that started in 2015, declined by 11.4 percent.

The number of Americans studying in China also decreased by 8.6 percent, marking the fourth straight year of decreases in the number of American students studying there. “What we’ve mostly heard from institutions is that it’s simply been a matter of refocusing their study abroad programs and looking at other countries,” Bhandari said. “Where they’ve already focused on China for quite a few years, they’re now diversifying some of the other countries where they would like to send their students.”

On the plus side, the number of students going to Japan climbed by 18.1 percent. And the number of students studying in Cuba jumped dramatically, increasing by 58.6 percent, from 2,384 students in 2014-15 to 3,782 students in 2015-16. The U.S. under President Obama took various steps to ease rules for academic travel to Cuba and re-established diplomatic relations with Cuba in 2015. It seems questionable, however, whether the surge in U.S. students going to Cuba will be sustained. The Trump administration last week issued new, somewhat tighter rules on travel to Cuba — though various forms of educational travel continue to be permitted — and the State Department in September warned Americans against travel to Cuba, citing “specific attacks” on diplomatic personnel there.

The top five destinations for American students were all in Western Europe: the United Kingdom, Italy, Spain, France and Germany. A little more than half of Americans studying abroad (54.4 percent) go to Europe. The next most popular regional destinations, in descending order, were Latin America and the Caribbean (16.3 percent of Americans studying abroad go there), Asia (11.1 percent), Oceania (4.2 percent), Sub-Saharan Africa (3.9 percent), the Middle East and North Africa (1.9 percent), and elsewhere in North America (0.5 percent). (“Open Doors” classifies Mexico as being part of Latin America, not North America.) Another 7.6 percent of students go to multiple destinations.

Sixty-three percent of students studying abroad in 2015-16 did so on short-term programs — summer programs or those of eight weeks or fewer — a percentage that did not budge much from the previous year. White women are disproportionally represented among study abroad participants, but participation has steadily grown more diverse in terms of students’ race and ethnicity, a trend that continued this year. The proportion of women to men barely budged from the year before: about two-thirds (66.5 percent) of study abroad participants in 2015-16 were women and one-third (33.5 percent) men.

Proportion of Study Abroad Students According to Race/Ethnicity

Students in science, technology, engineering and mathematics fields made up the largest percentage of students studying abroad — accounting for about a quarter (25.2 percent) of the total. Another 20.9 percent of study abroad students in 2015-16 studied business, 17.1 percent the social sciences, 7.4 percent foreign languages and international studies, and 6.9 percent fine and applied arts.