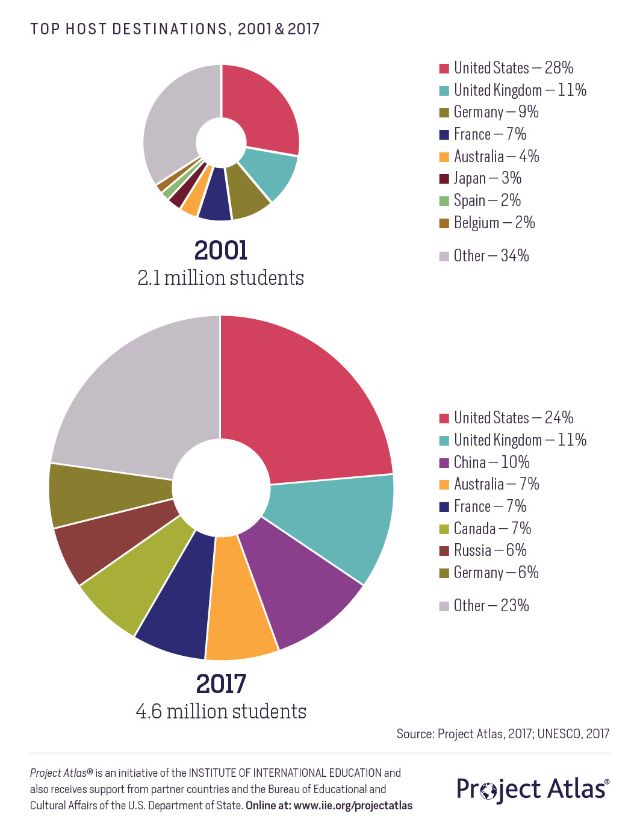 Pranshu Malik, a 19-year-old from New Delhi, wrapped up his first semester studying in North America in December. The hefty doses of snow and freezing temperatures presented some personal challenges, but the electrical engineering major gave the academic experience rave reviews. “The courses were great,” he says. “There are really good professors, and it feels good to be with equally passionate students.”

While Malik was accepted into U.S. colleges, the promise of a full scholarship drew him to the University of Toronto, placing him among the growing number of international students heading to Canada. In fall 2016, the country’s number of newly enrolled international students grew by 22 percent. In the U.S., by contrast, first-time enrollments in fall 2016 declined 3 percent – the first drop in at least 15 years, according to the Institute of International Education, or IIE. And according to a snapshot survey by the group, fall 2017 enrollments may be down even further, by 7 percent.

The U.S. receives by far the most international students worldwide, with more than 1 million accepted in fall 2016 – about twice as many as the U.K., the next biggest host. However its share of the growing number of foreign students has fallen over the last decade as more young people have chosen to study in countries such as Canada, the U.K. and Australia.

The changing figures have some higher education experts concerned that unless the U.S. changes its approach to international students, it could lose out on the significant economic and cultural benefits they bestow.

International students contributed $36.9 billion to the U.S. economy and supported more than 450,000 jobs during the 2016-2017 academic year, according to NAFSA: Association of International Educators. Foreign students expose domestic students to the cultural diversity they will encounter in a globalized workplace, college officials say, and subsidize universities and their domestic students through paying higher tuition. They can also make significant research contributions and enhance the country’s fastest-growing, most lucrative fields.

“The U.S. has benefited greatly from having large cohorts of some of the most talented individuals from other countries arriving, particularly for specialized graduate degrees,” says Amir Reza, vice provost of international and multicultural education at Babson College. “If those individuals who are going to be stars in their fields are now deciding that Canada, Australia, the U.K., Germany or even China are the more appropriate destinations, what does that do for U.S. competitiveness 10 or 15 years from now?”

Some of the world’s top hosts of international students have witnessed growing enrollment due to official recruitment efforts as well as political shifts that have shaped student preferences.

In 2016, Australia released a strategy for international education, which seems to have paid off. As of October of 2017, the country reported having about 350,000 international higher education students, up 15 percent from the previous year. China, which is now among the top three largest hosts, has announced ambitious plans to attract even more international students. And the U.K., which has no official policy, had a record number of 500,000 foreign students in 2015-2016.

“We regularly hear from students who have been working with us for years to hopefully study in the United States that they are now looking elsewhere,” says Christopher Viers, associate vice president for international services at Indiana University. “It’s no coincidence that the proportion of students seeking higher education in Canada and elsewhere has increased so significantly in the last year, while the U.S. share of globally mobile students is declining.”

At Indiana, overall enrollment from foreign students was down for the first time in decades by 2.5 percent in fall 2017, and applications for next fall are down approximately 10 percent. Viers links the falling numbers largely to negative political rhetoric about immigrants during the campaign and the president’s travel ban. Some students and their families are concerned about the safety of immigrants, he says, while others wonder whether student visa changes under consideration might further limit opportunities in the U.S.

“Our recruiting efforts were facing pretty significant headwinds leading up to the election,” Viers says. “Now we’re heading into the perfect storm.”

But the political climate in the U.S. is only part of the reason for its declines in international student enrollment, experts say. The high cost of higher education in the U.S. and changes in scholarship programs in countries like Brazil and Saudi Arabia are making other nations seem like more practical destinations to study abroad.

Still, the brand power of American higher education remains strong – and it’s unlikely any other country will eclipse the U.S. in terms of numbers of international students anytime soon. Despite political changes, the U.S. is still perceived as the No. 2 Best Country for Education, behind only the U.K., according to the 2018 Best Countries rankings.

[MORE: These Are the Best Countries to Study Abroad]

The popularity of U.S. higher education is due to a range of factors, including the sheer number and diversity of American institutions, top-notch research opportunities and colleges and universities that regularly dominate worldwide rankings, according to the IIE. And for now, at least, the U.S. has a leg up on other countries in terms of offering strong student services, in part since it’s been at the game for more than 100 years.

“Because we started accepting international students into our schools so long ago, we really have a profession that is dedicated to taking care of international students, and other countries are starting to realize the value of that and are building up that capacity,” says Peggy Blumenthal, senior counselor to the president at IIE.

Even Malik, who ended up at the University of Toronto, says no other country rivals the U.S. in terms of the lure for international students. His family was initially determined that he would study in the states, and it took some effort to persuade them that pursuing an education in Canada made more financial sense.

Still, if he had secured a full scholarship to a U.S. institution, he says he would have studied there instead.

“The U.S. has a large network of well established institutions that do research in all kinds of fields, which certainly helps an undergraduate to explore his interests and learn better,” Malik says.

In a few years, when it comes time to apply to graduate schools, he’ll be scouting for diploma opportunities south of the border.