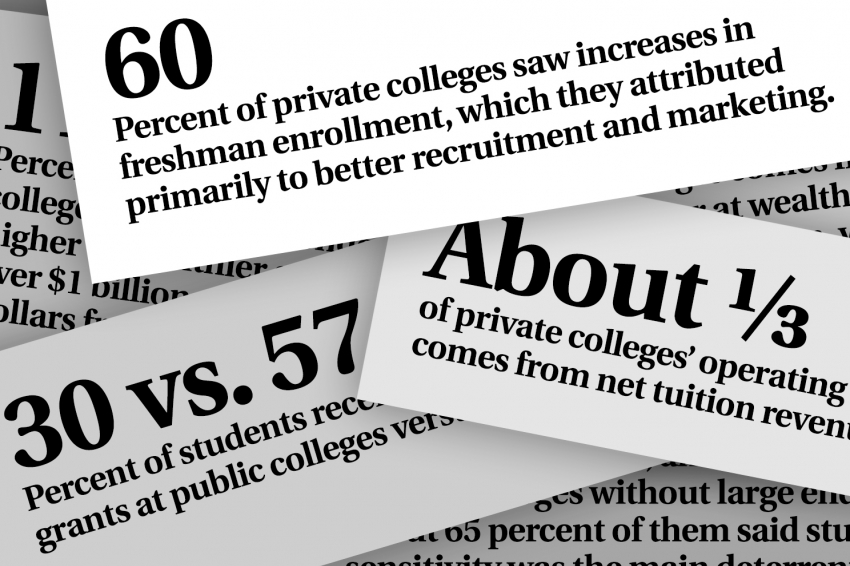 Private colleges are offering students discounts on tuition and fees at record-high rates, according to the annual Tuition Discounting Study, released on Thursday by the National Association of College and University Business Officers.

The average tuition-discount rates for the 2018-19 academic year are estimated at 52.2 percent for first-time freshmen and 46.3 percent for all undergraduates, according to the study. That means that 46 cents of every dollar in tuition and fees are used for financial aid.

The new estimates continue an upward trend that has persisted for more than a decade. Both the share of students receiving institutional grants and the size of those grants have increased.

The average grant for freshmen has climbed to $20,255 from $10,586 in the 2008-9 academic year, an increase of 91 percent. Published tuition and fee prices have increased by 47 percent in the same period. And nearly 90 percent of freshmen received such a grant this academic year, compared with 82 percent a decade earlier. An average grant covered 59 percent of a freshman’s tuition and fees.

The trends suggest that “most increases in tuition and fee listed prices have largely been offset by even higher institutional discounts,” according to a report on the study. The trends also “warrant questions about whether tuition-discounting practices are sustainable.”

Private colleges have seen rising discount rates — the percentage of revenues from tuition and fees that is awarded to students in grants and scholarships — as troubling signs for their finances. As colleges jockey for price-conscious families in a more-competitive market, heftier grants can strain their budgets over time. For the 2017-18 academic year, colleges reported a 3.6-percent decline in net tuition revenue from freshmen, when adjusted for inflation, according to the study.

In search of financial balance, colleges have focused on retention, rather than recruitment, Redd said, and have experimented with adjusting the sticker prices that may scare away many families. Many colleges have also looked for sources of revenue besides tuition and fees, such as fund raising and auxiliary services, he said.

The organization surveyed 405 private, nonprofit colleges for its 2018 study. Here are other findings from it:

percent of students receive institutional grants at public colleges versus private ones.

percent of financial-aid funding at all private colleges comes from endowments. The share is higher at wealthier colleges, with endowments over $1 billion, which fund 30 percent of aid dollars from their endowments.

percent of private colleges reported flat or declining enrollments, an important driver of revenue for colleges without large endowments. About 65 percent of them said students’ price sensitivity was the main deterrent to enrollment, followed closely by increased competition for students and “changing demographics.”

percent of private colleges saw increases in freshman enrollment, which they attributed primarily to better recruitment and marketing.