International enrolments in US ELT fell by 50% in 2020

The role of technology and its potential to disrupt in the student recruitment space was debated by titans of innovation – with new breed edtech edupreneurs sharing a panel with veteran businesses such as QS and UKEAS at a PIE-hosted webinar.

CEO of UKEAS, Pieter Funnekotter, said his company (which counsels 10,000 students per year) still sees value in offering face-to-face services as it allows for better assessment of the likelihood of visa application success and higher conversions.

High conversion from application to enrolment was in fact top of the wishlist among the hundreds of university delegates watching who voted on a poll during the session.

“Perhaps unsurprisingly, we think [face-to-face counselling] is still important,” said Funnekotter, heading up a company which has a presence in nine countries and expanded into India last year.

With plans to open a total of 15 new offices in India over the next few years, Funnekotter said that while the demand for face-to-face services certainly exists, it does depend on the market.

“We ran a hybrid event with barely any universities there and just iPads, and we still had over a thousand students attend”

“In Taiwan, for instance, you can’t get rid of face-to-face. We ran a hybrid event with barely any universities there and just iPads, and we still had over 1,000 students attend,” he continued.

“But I think the really important thing is that what we’re seeing is a shift in what face-to-face means. What matters is small-scale events and community. A lot of students are really interested in speaking with fellow students.”

He said regular interaction with students led to better conversion prospects. “For UK partners, that’s something really important for their UKVI rating to make sure that’s retained. We know for a fact that the students we see most often are the ones that convert at the highest rate.”

Funnekotter also detailed digital evolution being planned at UKEAS however, mirroring other large student counselling businesses which have moved tech-first, such as TC Global.

He said many students find it hard to submit five or six applications if they are applying to that many universities. “We think there’s a real place for technology in how we can tap in with our university partners and just using tech to make that that whole system way better than it has been,” he said.

And trends are tipping towards buyers across most industries becoming comfortable with making high-level decisions based purely on platform interactions, noted a number of panellists.

“More and more people are getting comfortable even with high ticket, high merit buying decisions… to take them on the base of digital platforms and digital information,” asserted Edwin van Rest, CEO of StudyPortals.

At QS, Edward Harcourt explained,“What we’ve been doing is to develop bespoke machine learning models for our individual clients, drawing on our data. Our models can accommodate up to 200 data reference points: demographical, behavioural, we can look at how they interact with us and constantly tune up and improve these machine learning models in order to drive a solid conversion rate and make sure that we’re focusing our efforts on the students who are most likely to succeed.”

Harcourt explained QS is fine-tuning data-led insights but also matching these innovations with live chat functionality so there is an “always-on service for international applicants”.

Representing unicorn business, ApplyBoard, co-founder Meti Basiri also argued that greater adoption of tech is only just beginning to be utilised in recruitment, especially when it comes to big data. Inaccurate predictions about enrolment numbers can be costly for institutions.

“I don’t think industry has seen 5% [of the potential impact]. But the reasons for that is there’s just so much data in every single application,” he said.

“In the past six years, more than half a million applications have gone through ApplyBoard. More than a quarter million of that was last year. And for every single application, we collect more than 200 data points,” he said.

Co-chair of the panel, Coventry University deputy vice chancellor international David Pilsbury, says he counselled against “people trying to put the genie back in the bottle”.

“It’s a complete misstatement to say that ApplyBoard is doing anything new in terms of aggregation,” he said.

“Aggregation in terms of using sub-agents has been around for five or six years, just in the past people used to do it with excel spreadsheets and telephones. Now there is more power being able to do it in a systematic way.”

He continued, “I’m not an ideologue pushing any agenda. I want people to understand that there’s a multiplicity of different futures here. It’s a challenge that we need to get to grips with.

“And I would say always start with the data, because what everybody here has said is that there is now this incredible ocean of data that can be mined and distilled and used to support decision making and institutional thinking.” 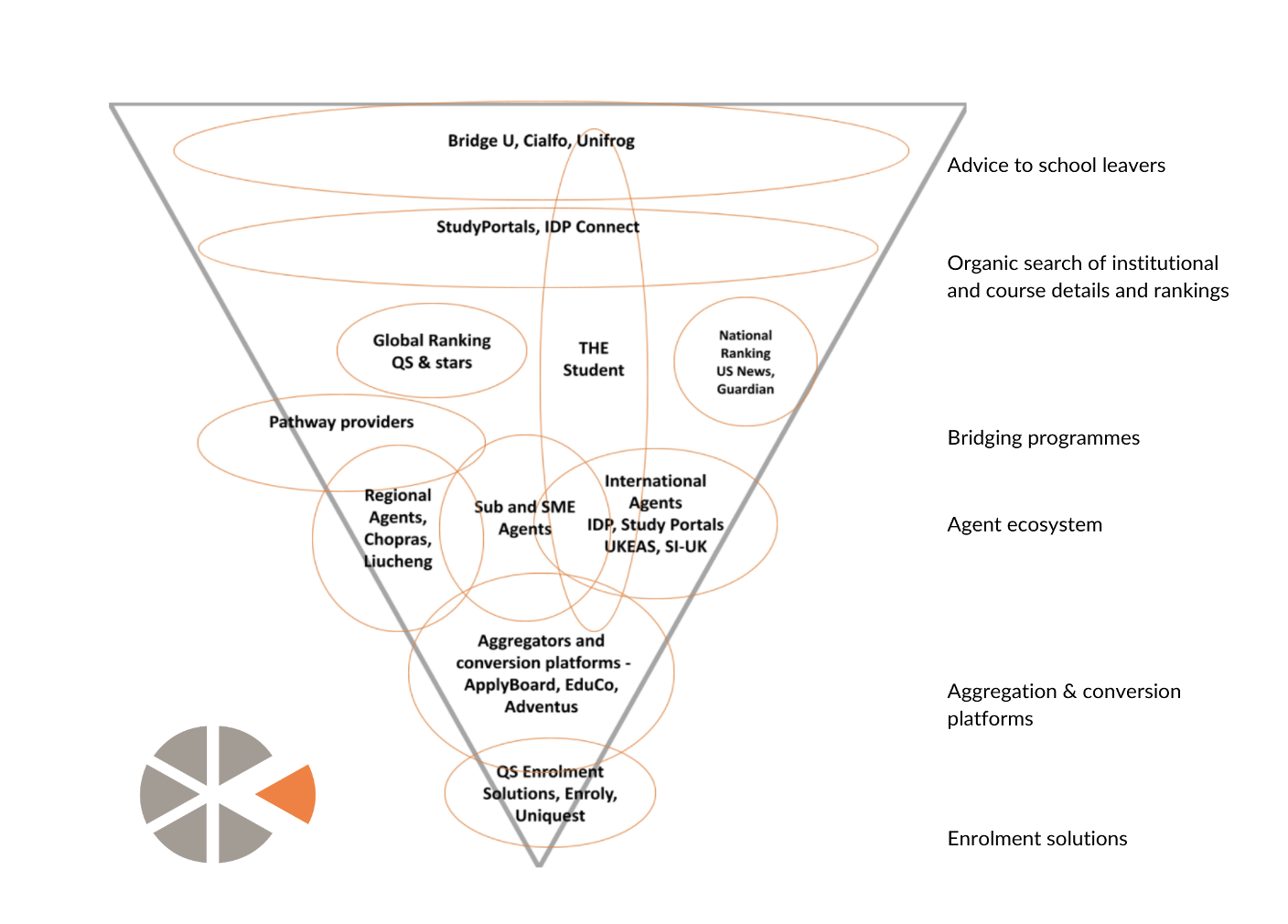 Harcourt added, “The great promise, I think, of the AI-assisted innovations that a number of us are now looking at is that it brings that highly responsive, highly personalised, highly authentic counselling opportunities more readily to a wider group of people, including people we don’t currently serve.”

Basiri agreed: “[There are] 7,000 plus islands existing in the Philippines and we think schools or agents can be present on 7,000 islands? I think we’re fooling ourselves. I don’t think face to face recruitment is going to be the way to go.”