Chinese Students and U.S. Universities Connect Through a Third Party 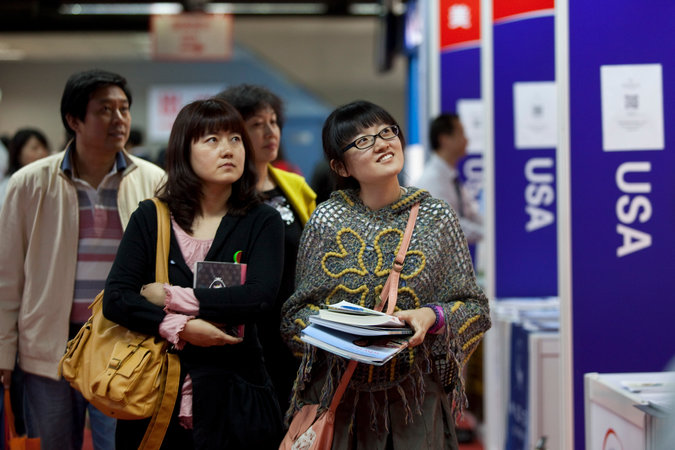 BEIJING — Zhao Yang, 18, a high school student in Beijing, looked upset as she emerged from a room equipped with a video camera.

“I was too nervous, so I spoke too fast,” she told her parents. “The questions were too weird. I wasn’t prepared for most of them.”

Ms. Zhao is a top student with ambitions to go to a top American university. She has been preparing for years, working with a private admissions agent and taking the SAT and the Test of English as a Foreign Language several times. Her parents have invested more than $30,000 in the project, hoping to give their only child a boost.

On this afternoon, Ms. Zhao faced a new challenge — being interviewed in English before a camera. “He asked me what I’m interested in and why,” she said.

The video of the interview, conducted by a private company based in Beijing, would be uploaded to the company’s website, where it could be viewed by American admissions officers, who would consider it alongside Ms. Zhao’s test scores and written application.

The number of Chinese students competing to enter high schools and colleges in the United States has soared in recent years. According to theInstitute of International Education, in the 2014-15 academic year, more than 300,000 Chinese were enrolled in American higher education, almost triple the number five years before.

Traditionally, colleges conduct on-campus interviews or enlist alumni to help. But with the surge in applications from China, colleges are unable to keep up with the volume of interview requests. To sift through the flood of applicants, more American institutions have sought third-party interviews with prospective students. This helps determine whether students who score high on paper can also engage in class discussions. It also provides a check against fraud, such as forged transcripts or application essays ghostwritten by hired agents, by testing their English-language abilities.

That in turn has given rise to new services on the Chinese side to meet that demand. Terry Crawford, the chief executive of InitialView, which provides interview services and was founded in Beijing in 2009, said that in 2013, more than 6,000 applications from China included an InitialView interview and that by 2014, the number exceeded 17,000. According to Chinese admissions agents, more than a third of the 100 top-rated American colleges and universities recommend third-party interviews, though few require them.

Jiang Xiaobo, the director of the college counseling center at the Beijing National Day School, said, “Third-party interviews require a high level of communication skills in English and logical thinking, which poses a challenge to students who grew up in the traditional education system inChina.” That system tends to emphasize written test results, with little regard for extracurricular pursuits.

Experts say the interviews can change how colleges consider applicants.

“Students who are able to articulate their thoughts in understandable (perfection is not expected) English and who appear ready to succeed in the college classroom are advantaged,” Jim Miller, a college enrollment consultant and the former president of the National Association for College Admission Counseling, wrote in an email.

Yan Xiaoliang, 19, who attended a private high school in Chengdu that offers courses in English, said he believed an interview made the difference to his admission to the Georgia Institute of Technology.

“My SAT scores were below average,” he said in a phone interview. But in his interview, Mr. Yan, who is now a sophomore at Georgia Tech, discussed his interest in electric cars and the novel “Moby-Dick,” explaining what he considered his own personal “white whale.”

Rick Clark, Georgia Tech’s director of undergraduate admissions, said the institute had worked with InitialView since 2011. “This was based on a radically increasing number of applicants from China and our desire to admit and enroll students who were not only academically talented but who also demonstrated an ability to contribute to classroom dialogue and the campus community,” he said. While 33 students from China applied in 2007, he said, the number jumped to 1,149 for the class entering in 2011.

Mr. Crawford of InitialView said the admission rate at Georgia Tech among Chinese applicants who had been interviewed by his company was 17 percent, and 3 percent for those who had not. Mr. Clark would not confirm those figures.

“That seems to imply doing an interview radically changes the admit rate or puts it at a very high point, and that’s not accurate,” Mr. Clark said. “However, if a student couples good grades, good testing, good interview, their holistic profile is certainly strong and compelling.”

“We have definitely found examples of discrepancies between documents and application materials, as well as instances in which applicants or agents have falsified materials,” he said. “The interview helps to confirm a student’s English ability, as well as to really probe into both curriculum as well as extracurricular involvement and passions.”

A third-party interview can cost $150 to more than $450. Many students complain, but some parents accept this as the price of admission.

“I guess this will help schools to know my daughter better,” said Ms. Zhao’s mother, who declined to give her name. “But it is tough.”

Applying to only American colleges has spared her daughter the ordeal of taking the gaokao, China’s notoriously stressful university entrance exam, her mother said

Still, she said her daughter sleeps only about five hours a day, with the demands of homework and applying for college.

“I would say the pressure is just as great as for the gaokao,” Ms. Zhao’s mother said.