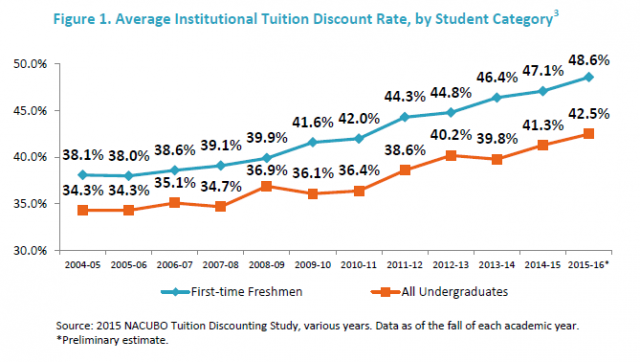 Tuition discount rates keep climbing to previously unseen levels at private colleges and universities, leaving institutions caught between the need to enroll highly price-conscious students and the squeeze discounting places on the amount of money they end up netting.

The average institutional tuition discount rate rose to an estimated 48.6 percent for first-time, full-time freshmen in 2015-16, according to a report released today by the National Association of College and University Business Officers. The rate, which represents the portion of total tuition and fee revenue channeled back to students as grant-based financial aid, was up from 47.1 percent the previous year. Discount rates also increased when all undergraduates were measured, rising to 42.5 percent from 41.3 percent.

That means private institutions piped nearly half of every dollar charged in tuition and fees back into scholarships and grants for freshmen. Counting all students, they routed more than 42 cents of every dollar into financial aid. Both numbers are all-time highs. The number also means private colleges and universities relied on steep discounts to attract students or make themselves affordable.

Discount rates have been marching steadily higher since 2008-9, when large swaths of family wealth evaporated during the financial crisis and Great Recession. Discount rates averaged 39.9 percent for freshmen and 36.9 percent for all undergraduates in 2008-9.

The popular theory is that the recession caused a break in the way families view finances and tuition. Students and parents with less cash on hand became more price conscious. They also became increasingly willing to shop between pricier private institutions and lower-cost options like state universities and other alternative programs.

Still, discount rates were ticking up even before the recession — they stood at 38.1 percent for freshmen and 34.3 percent for all undergraduates in 2004-5.

Regardless of the reason behind the rising discount rates, they’ve contributed to a landscape where many colleges and universities feel the squeeze. Net tuition revenue growth estimates averaged 1.2 percent for freshmen in 2015-16, flattening slightly from 2.1 percent a year earlier. Net tuition revenue growth across all undergraduates averaged an estimated 1.8 percent in 2015-16, about even with 1.7 percent the year before. Net revenue increases weren’t enough to keep pace with the rate of inflation as measured by the Higher Education Price Index, which was 2.1 percent in 2015.

The trends have universities asking questions about their strategy going forward, said Ken Redd, director of research and analysis at NACUBO.

“There’s a real emphasis among our chief business officers and other campus leaders to preserving, to the extent they can, affordability,” Redd said. “There’s a big price that campuses are paying for that. With the net tuition revenue essentially, in real terms, being flat for the last couple of years, it really does mean that institutions have to start thinking about other ways of helping to preserve the emphasis on affordability.”

Open questions include whether current levels of discounting are sustainable, what strategies should be used to take on enrollment declines and, notably, whether private colleges will have to turn to cutting listed tuition and fee prices.

NACUBO asked chief business officers to share strategies they used in the 2015 fiscal year to raise net tuition revenue in 2015. Student recruitment and retention made up the top strategy, used by 27.7 percent of institutions. Financial aid strategies followed at 26.7 percent, tailed closely by tuition pricing strategies at 24.2 percent. Changes or additions to academic programs were only cited by 4.7 percent.

“For many schools, just raising the discount rate is not by itself a way of solving enrollment or revenue issues,” Redd said. “A number of schools seem to be trying different strategies. It’s too early in the process to know how those strategies will work.”

Meanwhile, institutions clearly felt they were losing enrollment because of prices. Among survey respondents that experienced freshman enrollment declines between 2012-13 and 2015-16, a whopping 62 percent said they believed students’ price sensitivity was a factor. Price sensitivity was the top reason cited, followed by increased competition at 60 percent, changing demographics at 51 percent, a decrease in the number of 18- to 24-year-olds in a region at 40 percent and a decrease in yield rates at 39 percent. Farther down, 19 percent of institutions said they lost freshmen because they became more selective.

Colleges and universities are going to have to become more sophisticated in their pricing, said Rick Beyer, a former president of Wheeling Jesuit University and a consultant who is the managing principal of AGB Institutional Strategies.

“We’re in a deflationary market for tuition pricing, and we’ve hit a time in the marketplace where the consumers are now in charge of what they’re going to accept,” Beyer said. “As a result, colleges are going to have to completely redesign their business model to be prosperous in the future.”

Efforts to step away from discounting aren’t just an abstract number on a page — some universities are openly discussing their strategies. Transylvania University is a private liberal arts college in Lexington, Ky., with an enrollment of 1,050. Its discount rate for the fall of 2015 was roughly 54 percent for incoming students.

But the university this year started focusing on fighting the trend of ever-escalating discounts, with the hope of avoiding negative long-term financial impacts to programs.

“We’re pretty sure that it’s not a sustainable path for us to keep going up and up and up,” said Rhyan Conyers, vice president for enrollment and dean of admissions. “Every dollar that we put into financial aid is a dollar that we can’t put into supporting our students.”

Transylvania’s efforts demonstrate the difficulty of holding the line on discount rates, however. Families are intent on affordability, Conyers said. The university has to be sensitive to students’ financial needs.

It’s a balancing act. This year, Transylvania started with an emphasis on limiting stackable scholarships — institutional grant money awarded on top of outside aid.

“Knowing that the market can sometimes react pretty negatively to large changes in pricing or discounting, we have what we consider to be a steady approach,” Conyers said. “It’s not as though we’re saying we’re not going to give any merit scholarships anymore.”

Some may discuss cutting the sticker price, but it hasn’t been touted as a serious option at Transylvania. It could be difficult for colleges and universities to slash sticker prices without hurting their perceived value among students.

Other trends in the NACUBO report include small colleges and universities feeling the discount-rate pinch the hardest. Small institutions — those with total enrollment below 4,000 — estimated net tuition revenue per freshman increased by just 0.6 percent in 2015-16 after no growth the year before. Research universities posted gains of 3.2 percent in 2015-16 after 8.4 percent the previous year, while comprehensive institutions recorded gains of 1.8 percent and 0.9 percent over the same time frame.

A vast majority of first-time freshmen, 88.2 percent, received institutional grants in 2015-16. The amount was roughly even with the previous two years. The average grant for freshmen as a percentage of tuition and fees was up, rising to 55.5 percent from 53.9 percent.

More than three-quarters, 78 percent, of total institutional aid dollars awarded in 2014-2015 went toward students who had demonstrated financial need.