The Cheapest Countries to Study Abroad

When You Need a Fast-Talking Dean 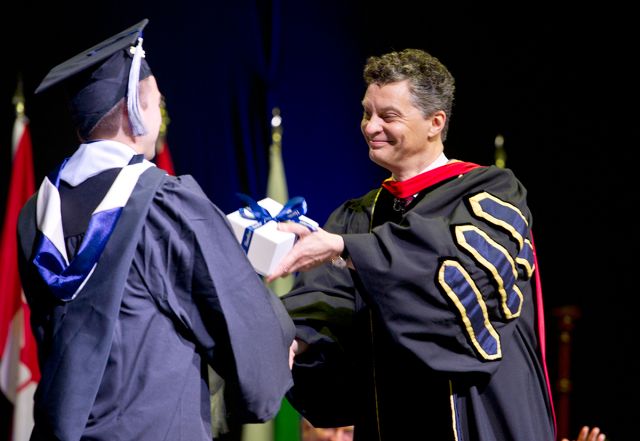 At Hamilton, Pat Reynolds has mastered the art of reading names of graduates with speed and accuracy.

These days, many colleges and universities graduate so many people at a single commencement that the tradition of reading graduates’ names is long gone. For smaller colleges, the tradition lives on. But many in the audience care only about the name of their child or loved one and lose patience waiting for those with names at the end of the alphabet.

Hamilton College may have found the perfect solution. Its dean of the faculty, Pat Reynolds, has been timed, and he reads the names of the nearly 500 graduates faster than any of his predecessors in the last 25 years. Hamilton knows this because an emeritus professor of biology, Ernest Williams, has been timing the reading of names for that long. And he certifies that Reynolds — who some years gets in about 15 names a minute — is far speedier than any of the five other deans Williams timed.

Reynolds did not set a record at Sunday’s commencement, as he believes he gave an extra 0.4 seconds per name. Still, the program didn’t stall.

Williams times the number of names at various one-minute intervals to calculate the names-per-minute statistic. Last year, he timed at nine different points and then determined the average. Williams does not count periods that tend to slow things down, such as the first and last graduate or someone crossing the stage on crutches.

Reynolds does not just aim for speed but for accuracy as well. He asks each graduate to email him a phonetic rendition of his or her name. And he also uses the NameCoach app in which students can record their names for him to hear.

You can see Reynolds in action below, setting out some rules so parents won’t obstruct anyone’s view or slow down the reading of names, and then launching into the list of this year’s graduates.