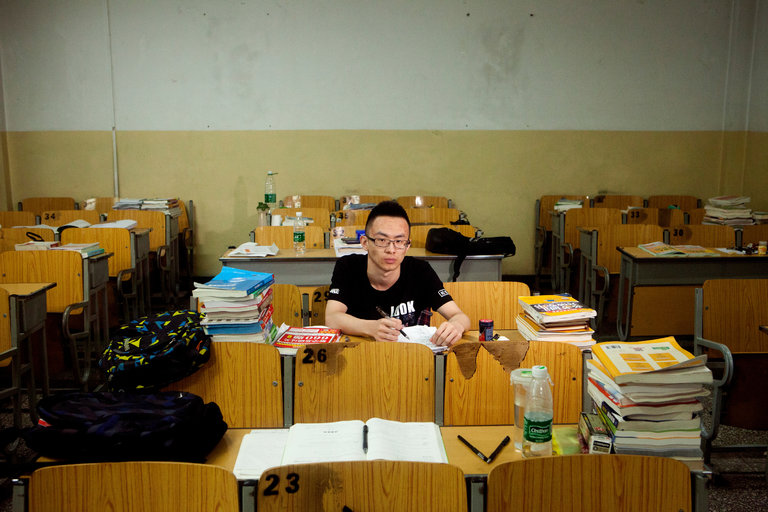 BEIJING — Chinese primary and secondary schools are often derided as grueling, test-driven institutions that churn out students who can recite basic facts but have little capacity for deep reasoning.

A new study, though, suggests that China is producing students with some of the strongest critical thinking skills in the world.

The unexpected finding could recast the debate over whether Chinese schools are doing a better job than American ones, complementing previous studies showing Chinese students outperforming their global peers in reading, math and science.

But the new study, by researchers at Stanford University, also found that Chinese students lose their advantage in critical thinking in college. That is a sign of trouble inside China’s rapidly expanding university system, which the government is betting on to promote growth as the economy weakens.

The study, to be published next year, found that Chinese freshmen in computer science and engineering programs began college with critical thinking skills about two to three years ahead of their peers in the United States and Russia. Those skills included the ability to identify assumptions, test hypotheses and draw relationships between variables.

Yet Chinese students showed virtually no improvement in critical thinking after two years of college, even as their American and Russian counterparts made significant strides, according to the study.

“It’s astounding that China produces students that much further ahead at the start of college,” said Prashant Loyalka, an author of the study. “But they’re exhausted by the time they reach college, and they’re not incentivized to work hard.”

The findings are preliminary, but the weakness in China’s higher education system is especially striking because Chinese leaders are pressing universities to train a new generation of highly skilled workers and produce innovations in science and technology to serve as an antidote to slowing economic growth.

The government has built hundreds of universities in recent years to meet soaring demand for higher education, which many families consider a pathway into the growing middle class. Enrollment last year reached 26.2 million students, up from 3.4 million in 1998, with much of the increase in three-year polytechnic programs.

But many universities, mired in bureaucracy and lax academic standards, have struggled. Students say the energetic and demanding teaching they are accustomed to in primary and secondary schools all but disappears when they reach college.

“Teachers don’t know how to attract the attention of students,” said Wang Chunwei, 22, an electrical engineering student at Tianjin Chengjian University, not far from Beijing. “Listening to their classes is like listening to someone reading out of a book.”

Others blame a lack of motivation among students. Chinese children spend years preparing for the gaokao, the all-powerful national exam that determines admission to universities in China. For many students, a few points on the test can mean the difference between a good and a bad university, and a life of wealth or poverty.

“You get a degree whether you study or not, so why bother studying?” said Wang Qi, 24, a graduate student in environmental engineering in Beijing.

The merits of the Chinese education system are a perennial subject of debate, in the United States as much as in China. The Obama administration has held up the stronger performance of Chinese high school students on international exams in math, science and reading as an example of stagnation in the United States.

Critics argue that Chinese teachers place an unhealthy emphasis on test preparation and rote memorization at the expense of critical thinking skills and creativity. They also say international exams overstate the strength of China’s system because they exclude students from poorer regions.

The Stanford study, based in part on exams given to 2,700 students at 11 mainland universities, has its own limitations. It does not account for people who are not enrolled in universities, a large swath of Chinese youth. It looks exclusively at students in computer science and engineering programs. And while it measures critical thinking, it does not offer insight into creativity, a topic often hotly debated in discussing the Chinese education system.

Still, the researchers found stark differences when they compared Chinese students with their overseas counterparts.

In addition to examining critical thinking skills, the study looked at how Chinese students compared in math and physics. While testing for the United States is not yet available, the researchers found that Chinese students arrived at college with skills far superior to their Russian counterparts.

After two years of college, though, the Chinese students showed virtually no improvement while the Russians made substantial progress, though not enough to catch up.

The Stanford researchers suspect the poor quality of teaching at many Chinese universities is one of the most important factors in the results. Chinese universities tend to reward professors for achievements in research, not their teaching abilities. In addition, almost all students graduate within four years, according to official statistics, reducing the incentive to work hard.

“They don’t really flunk anyone,” said Scott Rozelle, an economist who has studied Chinese education for three decades and a co-author of the study. “The contract is, if you got in here, you get out.”

The problems plaguing the higher education system have taken on new urgency as China’s ruling Communist Party tries to navigate a difficult transition from an economy fueled by manufacturing and assembly-line work to one led by growth in fields such as information technology and clean energy.

Eric X. Li, a venture capitalist in Shanghai who helped finance the Stanford study, said the success of Chinese secondary schools in teaching critical thinking could mean more innovation among younger Chinese that would help the economy.

“The common narrative that we hear is that Chinese educational system kills creativity and kills innovation,” he said. “But China is probably one of the most entrepreneurial societies in the world.”

The slowing economy has made it difficult for university graduates to find work, with about one-fifth remaining unemployed immediately after graduation and many settling into low-paying jobs.

Lu Jiawei, 22, who studies engineering management at Beijing Information Science and Technology University, said the gloomy job market was to blame for a lack of motivation among students.

“Some students just give up, because no matter how hard they work, they still will never get their dream jobs,” she said.

The shortcomings of the higher education system have left students struggling to find programs that match their aspirations.

Niu Fuzhi, an aspiring computer scientist at Harbin University of Commerce, had high hopes when she enrolled in 2014. But she was quickly disappointed. Professors focused on teaching high-level theories, she said, and classrooms were chaotic.

“I feel like the past two years were a waste,” said Ms. Niu, 20, who ranks near the top of her class.

But Ms. Niu is hoping to make up for the skills she failed to learn in college — by enrolling in graduate school.