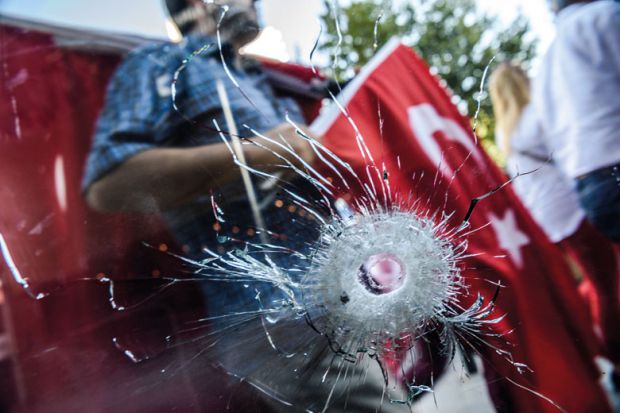 Post-coup crackdown has led to a huge number of requests for help, say charities for at-risk scholars.

Turkey is now the number one country for applications from under-threat scholars seeking safety in Western universities, according to two charities that help at-risk academics.

With hundreds of academics sacked, suspended or under investigation in the wake of the unsuccessful coup attempt in July, the Scholar Rescue Fund has faced an “unprecedented” number of requests for help, its director Sarah Willcox told an audience at the European Association for International Education’s annual conference, held in Liverpool from 13 to 16 September.

The New York-based charity, part of the Institute of International Education, has received some 65 applications from academics looking to work outside Turkey owing to fear of political persecution, and, in some cases, imprisonment and violence since late July, said Ms Willcox on 15 September.

“They all meet our criteria [for assistance] but it is a question of funding and we have to dig deep,” said Ms Willcox, who explained that the level of applications was “unprecedented” in the IIE’s 95-year history of helping academics at risk of persecution abroad.

The flurry of applications for the charity’s $25,000 (£18,900) fellowships, which is then matched by universities that agree to employ the at-risk academic on a temporary basis, exceeded the recent spike in demand that followed the outbreak of civil war in Syria in 2011, which led a third of all academics and 100,000 students to flee the country, Ms Willcox said.

Applications for help also soared following the invasion of Iraq in 2003, she added.

“We had a different landscape for Iraq, where the US was quick to jump in and provide funding – Syria was the same,” said Ms Willcox.

“But it appears it is not quite the same situation with Turkey,” she added of the US’ willingness to help those fearing political persecution by president Recep Tayyip Erdogan’s government. A strong ally of the US in the war against Islamic State, Mr Erdogan claims that supporters of the exiled Islamic cleric Fethullah Gulen have infiltrated public life in Turkey.

“We are also having to weigh [Turkish scholars’ applications] against those threatened scholars in conflict zones,” added Ms Willcox on how the charity uses its limited funds.

The UK-based Council for At-Risk Academics (Cara) is also receiving 15 to 20 applications a week for help, up from four or five a week last year, said its executive director Stephen Wordsworth.

“The largest number is now coming from Turkey, which is very sad,” said Mr Wordsworth.

Previously the charity had been able to rely largely on its own funds to place and support under-threat scholars in Western universities, but growing demand for its services means this is no longer possible, said Mr Wordsworth.

“We have to look to universities to shoulder the burden much more,” he said.

Cara, formerly known as the Council for Assisting Refugee Academics, now supports 214 scholars, compared with just a few dozen in its early decades, when it helped future Nobel prizewinning scientists such as Max Perutz and Hans Krebs.

The total value of fee waivers and financial support to scholars was around £600,000 in recent years, but this total was expected to rise to close to £3 million in 2016, Mr Wordsworth said.