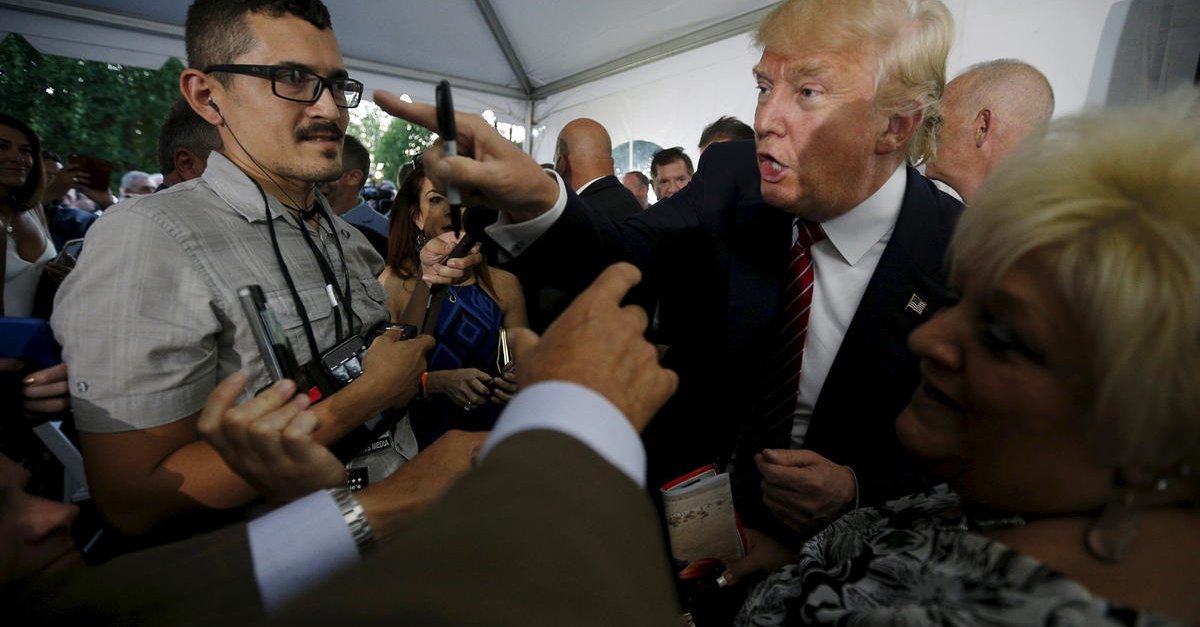 The mood in the Washington press corps is bleak, and deservedly so.It shouldn’t come as a surprise to anyone that, with a few exceptions, we were all tacitly or explicitly #WithHer, which has led to a certain anguish in the face of Donald Trump’s victory. More than that and more importantly, we also missed the story, after having spent months mocking the people who had a better sense of what was going on.This is all symptomatic of modern journalism’s great moral and intellectual failing: its unbearable smugness. Had Hillary Clinton won, there’d be a winking “we did it” feeling in the press, a sense that we were brave and called Trump a liar and saved the republic.

So much for that. The audience for our glib analysis and contempt for much of the electorate, it turned out, was rather limited. This was particularly true when it came to voters, the ones who turned out by the millions to deliver not only a rebuke to the political system but also the people who cover it. Trump knew what he was doing when he invited his crowds to jeer and hiss the reporters covering him. They hate us, and have for some time.

And can you blame them? Journalists love mocking Trump supporters. We insult their appearances. We dismiss them as racists and sexists. We emote on Twitter about how this or that comment or policy makes us feel one way or the other, and yet we reject their feelings as invalid.

It’s a profound failure of empathy in the service of endless posturing. There’s been some sympathy from the press, sure: the dispatches from “heroin country” that read like reports from colonial administrators checking in on the natives. But much of that starts from the assumption that Trump voters are backward, and that it’s our duty to catalogue and ultimately reverse that backwardness. What can we do to get these people to stop worshiping their false god and accept our gospel?

We diagnose them as racists in the way Dark Age clerics confused medical problems with demonic possession. Journalists, at our worst, see ourselves as a priestly caste. We believe we not only have access to the indisputable facts, but also a greater truth, a system of beliefs divined from an advanced understanding of justice.

You’d think that Trump’s victory – the one we all discounted too far in advance – would lead to a certain newfound humility in the political press. But of course that’s not how it works. To us, speaking broadly, our diagnosis was still basically correct. The demons were just stronger than we realized.

This is all a “whitelash,” you see. Trump voters are racist and sexist, so there must be more racists and sexists than we realized. Tuesday night’s outcome was not a logic-driven rejection of a deeply flawed candidate named Clinton; no, it was a primal scream against fairness, equality, and progress. Let the new tantrums commence!

hat’s the fantasy, the idea that if we mock them enough, call them racist enough, they’ll eventually shut up and get in line. It’s similar to how media Twitter works, a system where people who dissent from the proper framing of a story are attacked by mobs of smugly incredulous pundits. Journalists exist primarily in a world where people can get shouted down and disappear, which informs our attitudes toward all disagreement.

Journalists increasingly don’t even believe in the possibility of reasoned disagreement, and as such ascribe cynical motives to those who think about things a different way. We see this in the ongoing veneration of “facts,” the ones peddled by explainer websites and data journalists who believe themselves to be curiously post-ideological.

That the explainers and data journalists so frequently get things hilariously wrong never invites the soul-searching you’d think it would. Instead, it all just somehow leads us to more smugness, more meanness, more certainty from the reporters and pundits. Faced with defeat, we retreat further into our bubble, assumptions left unchecked. No, it’s the voters who are wrong.

As a direct result, we get it wrong with greater frequency. Out on the road, we forget to ask the right questions. We can’t even imagine the right question. We go into assignments too certain that what we find will serve to justify our biases. The public’s estimation of the press declines even further — fewer than one-in-three Americans trust the press, per Gallup — which starts the cycle anew.

There’s a place for opinionated journalism; in fact, it’s vital. But our causal, profession-wide smugness and protestations of superiority are making us unable to do it well.

Our theme now should be humility. We must become more impartial, not less so. We have to abandon our easy culture of tantrums and recrimination. We have to stop writing these know-it-all, 140-character sermons on social media and admit that, as a class, journalists have a shamefully limited understanding of the country we cover.

What’s worse, we don’t make much of an effort to really understand, and with too few exceptions, treat the economic grievances of Middle America like they’re some sort of punchline. Sometimes quite literally so, such as when reporters tweet out a photo of racist-looking Trump supporters and jokingly suggest that they must be upset about free trade or low wages.

We have to fix this, and the broken reasoning behind it. There’s a fleeting fun to gang-ups and groupthink. But it’s not worth what we are losing in the process.

Source: Commentary: The unbearable smugness of the press – CBS News