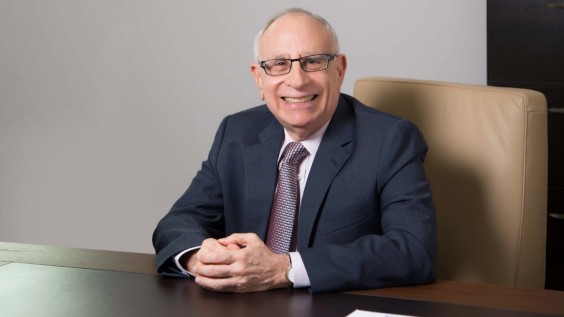 KARIN FISCHER: Welcome. I’m here with Al Bloom, the vice chancellor of NYU Abu Dhabi, and a former president of Swarthmore. Thank you for coming by The Chronicle.

KARIN FISCHER: Well, I wanted to talk with you. We often write about international campuses. And I think much of the attention tends to be when they’re very first beginning, often when they’re still in the planning stage, when they’re just an idea.

You now are a much more mature campus. It’s been more than 10 years since it was first announced. Five or six since you’ve enrolled your first students.

KARIN FISCHER: Tell me, what have you learned? What’s changed? The good and the bad.

ALFRED BLOOM: What I’ve really learned is that a great vision started with John Sexton at NYU in terms of creating a global university. And then developed very much because he was able to find a remarkable convergence with Sheikh Mohammed of Abu Dhabi and build together a campus of NYU that is quite unique in the kind of education it offers. Unique in the sense that it is part of NYU, a pioneering campus of NYU, at the same time a leading institution of Abu Dhabi, or maybe the leading institution of Abu Dhabi. And truly a model for the world that draws on constituencies from across the world and projects its model of how to educate for leadership in a global world. And what I’ve really learned from this is that its possible and not only possible but amazingly inspiring and encouraging to see the results of a model that is tailored to create leadership of a global world.

The Chronicle’s On Leadership video series explores various aspects of campus leadership with movers and shakers across academe. The series is hosted by Chronicle editors and reporters. Visit our complete collection of interviews.

To just jump ahead for example, in the three graduating classes that we’ve had, we’ve been able to have recognized eight students as Rhodes Scholars very much because of the fact that they’ve gone through what I think is one of the most rigorous and exciting educational experiences, but have also become leaders of a world in which they both have a perspective that incorporates the world and have developed the ability to stretch across difference and find common ground with people no matter what the differences of personality or of culture or of political persuasion. The ability of liberal-arts education to produce people who engaged the world, to produce graduates who really have the ability to see across differences, understand those differences, but know that below those differences are universal factors that absolutely unite humanity and to draw on those and build on those universal factors in order to find common ground, common purpose, and lead a more cooperative and productive world. And I do think that that’s something that liberal-arts education can and must incorporate in the way it looks at what its most important mission is in the 21st century.

KARIN FISCHER: I think a lot of skeptics, particularly here in the U.S., have when these campuses have been proposed have questions really whether you can take liberal-arts education, which is very American, and bring it to another culture another country. You mentioned working across difference. How have you done that in Abu Dhabi?

ALFRED BLOOM: I think actually liberal-arts education lends itself to be transported to other environments. Because what makes a liberal-arts education so successful is that it prepares people to engage in a complexity of issues and develop their own sense of what’s right and their own sense of the balance between conflicting factors, whether they be pragmatic or political or ethical. And by being in different locations in different cultures, it introduces the idea that there are a lot of ways of looking at the world, a lot of value systems, and prepares people to see those value systems, to stretch across differences in value systems, and find solutions that will work for a global world rather than only for a single country.

KARIN FISCHER: That’s a great segue. A few years ago, you’d written a piece for us. We were doing, in The Chronicle Review, a special issue on American campuses abroad. And we asked I think a number of people to reflect about the good and the bad of them. And I wrote it down because I wanted to remember it.

And you said, “Higher education must come to be identified not only as responsible for preparing citizens for societal roles and for fostering the pursuit of knowledge, but also as responsible through its structure and mission for elevating perspective about parochial, national, and ideological concerns toward the common pursuit of a more informed, accountable, just, and peaceful world.” That was several years ago that you wrote it. But today, and not just here in the U.S., but around the world we’re really grappling with the rise of a lot of parochial, national, and ideological concerns. What role do you think higher education and particularly global universities ought to play in combating anti-globalist sentiment, in fostering sort of a global advancement, in educating global citizens?

ALFRED BLOOM: I think it is actually the new central mandate of undergraduate education. And I would also say research enterprise as well. In undergraduate education if you look at the way in which the idea of responsibility for diversity grew, it was rejected at first, and then institutions began to say, We’ve got to be involved in this. We have to create a diverse world within ourselves so that we can develop a more equitable and more understanding diverse societies. Then came environmental sustainability and the same thing happened.

We must right now introduce into liberal-arts education the sense of commitment and the sense of capacity to move people to recognize how much we have in common as human beings, and know that despite differences and once you understand the differences, you actually have a better perspective on how much is similar, but just how much we don’t weigh things quite in the same balance. To then understand that and find ways of building bridges of shared purpose and shared understanding. And I think it has to be the new wave of expansion innovation by undergraduate education in order to prepare for whether it’s the splits in America or the splits at Brexit or the splits in the Arab world. It’s everywhere, and it’s getting worse. And we’re totally interdependent and a world in which resources are dwindling, in which technology is more and more dangerous.

And if we have yields and selectivities and admission, if we have numbers of Rhodes Scholars that are unique in the world, if we have faculty coming from all the best universities and proving in their research that we are already one of the finest research institutions in the world, it’s all because they really believe in the fact that this institution is providing a kind of education that is so essential to the 21st-century world.

KARIN FISCHER: Well, thank you very much for joining us.

Source: How the Liberal Arts Can Bridge International Divides – The Chronicle of Higher Education