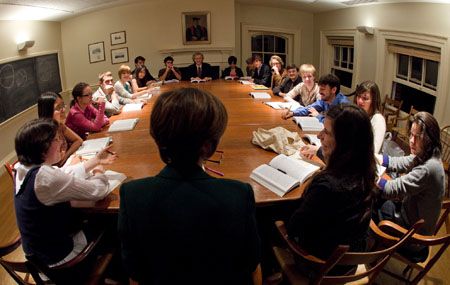 ORLANDO, Fla. — Talk to presidents of liberal arts colleges and they are proud of how their institutions educate graduates and prepare them for life. But ask the presidents to prove that value, and many get a little less certain. Some cite surveys of alumni satisfaction or employment. Others point to famous alumni.

And, privately, many liberal arts college presidents admit that their arguments haven’t been cutting it of late with prospective students and their parents (not to mention politicians), who are more likely to be swayed by the latest data on first-year salaries of graduates, surveys that seem to suggest that engineering majors will find success and humanities graduates will end up as baristas.

Richard A. Detweiler believes he has evidence — quantifiable evidence — that attending a liberal arts college is likely to yield numerous positive results in graduates’ lifetimes, including but not limited to career and financial success. He has been giving previews of his findings for the last year. On Friday, at a gathering here of presidents of the Council of Independent Colleges, he presented details and said he believes the results have the potential to change the conversation about liberal arts colleges. He said his findings show that the key characteristics of liberal arts colleges — in and out of the classroom — do matter.

At the meeting, Detweiler described his project. He started by examining the mission statements of 238 liberal arts colleges, looking at what the colleges say they are trying to accomplish with regard to their students. Among the common goals given for graduates were to produce people who would continue to learn throughout their lives, make thoughtful life choices, be leaders, be professionally successful and be committed to understanding cultural life.

Then Detweiler and colleagues conducted interviews with 1,000 college graduates — about half from liberal arts colleges and half from other institutions. The graduates were not asked about the value of their alma maters or of liberal arts education, but were asked a series of very specific questions about their experiences in college and then their experiences later in life. The graduates were a mix of those 10 to 40 years after graduation, and conclusions were drawn on liberal arts graduates vs. other graduates only when there was statistical significance for both relatively recent and older alumni. Some of the findings may be relevant to liberal arts disciplines at institutions other than liberal arts colleges, but the comparison point was for those who attended the colleges.

But What About Money?

Detweiler saved for last the characteristic that gets so much attention these days, and that liberal arts college leaders fear hurts them: money. He noted that his research does back the common belief that liberal arts graduates earn less than others, but only for the first few years after graduation.

He said that his study shows a high relationship between a broad undergraduate education and financial success. Those who take more than half of their course work in subjects unrelated to their majors (a characteristics of liberal arts colleges but not professionally oriented colleges) are 31 to 72 percent more likely than others to have higher-level positions and to be earning more than $100,000 than are others.

Detweiler said that his study not only suggests that the liberal arts college experience prepares students for a life well lived, but for a life of financial success.

While Detweiler said that his data (which he hopes to turn into a book) should bolster the case for liberal arts colleges, he also said that these institutions should not rest on their laurels.

He said that he worries when he hears about colleges trying to eliminate their smallest courses or increase the average size of sections when his findings show so much positive impact from close relationships between students and faculty members.

Further, he said that the findings show why it’s important for liberal arts colleges to think more than perhaps some do about what happens outside of class. And Detweiler said that too many colleges are engaged in “a facilities arms race” rather than thinking about the student experience.

Finally, he said that the challenge for liberal arts colleges is to start changing the way people talk about their institutions. “How do we communicate to others how and why this approach actually matters?” he asked.