With The Stroke Of A Pen, Trump May Have Sparked An American Brain Drain 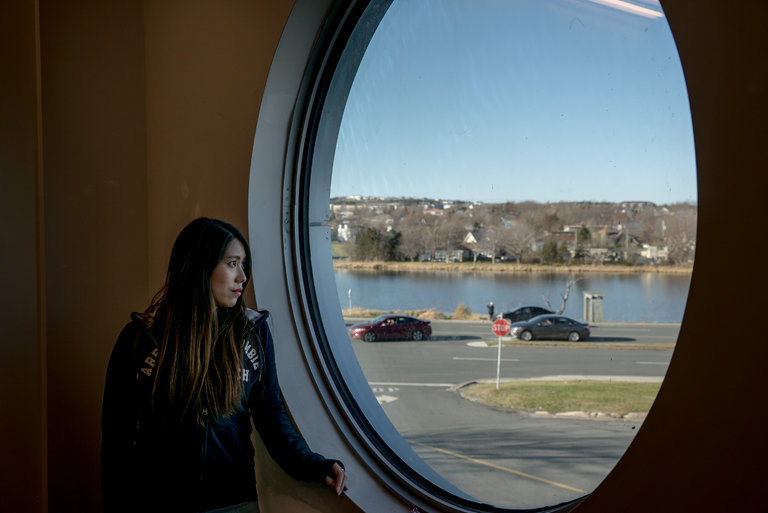 ST. JOHN’S, Newfoundland — At the College of the North Atlantic here, a young Chinese woman stood discussing her future with two fellow students, a Bangladeshi man and a Korean woman, amid a flow of mostly pale Newfoundlanders in down coats and hoodies heading for class.

“The environment here is really good, so I think for my health I will stay,” said Fei Jie, from China’s eastern Shandong Province. The others said they, too, were planning to remain in the country after graduation, eventually becoming Canadian citizens.

Their path is no accident. They are three of hundreds of thousands of international students in Canada today as part of a government strategy to reshape Canadian demographics by funneling well-educated, skilled workers through the university system. It is an answer to Canada’s aging population and slowing birthrate, and an effort to shore up the nation’s tax base.

In November, the federal government changed its electronic immigration-selection system, called Express Entry, to make it easier for international students to become citizens. And a bill pending in the Senate would restore a rule that counts half of students’ time spent studying in Canada toward the period of residency required for citizenship.

The country needs talented immigrants to backfill a thinly spread, aging population. According to Immigration, Refugees and Citizenship Canada, the country’s immigration department, immigrants already make up 75 percent of the annual net growth in the country’s work force and are expected to account for 100 percent within 10 years.

“All of the building blocks are in place, just in terms of the reputation of our education system for quality, the reputation of the country as tolerant and safe, and the affordability of education in Canada and the opportunities that Canada gives to international students to be welcomed on a more permanent basis,” said Karen McBride, the president of the Canadian Bureau for International Education, an association of educational institutions.

Internationalizing Canadian education promises a deep and lasting effect on the country, binding it to other nations and cultures through the family ties and the broader perspectives of international students who become citizens and may even rise to positions of national power. Canada’s new immigration minister, for example, arrived in the country as a Somali refugee and earned a law degree at the University of Ottawa.

But the strategy may also lead to tensions similar to those seen in the United States and Europe as the makeup of Canadian society evolves and less educated segments of the mostly white work force feel pushed aside.

Since the early 1970s, when Canada embraced multiculturalism, the percentage of what it calls “visible minorities” has ballooned to about 20 percent of the population.

Statistics Canada, the country’s census bureau, predicts that the number will reach nearly 30 percent by 2030. Nonwhites will make up a majority of the population in Toronto and Vancouver.

Every week, receive a handpicked selection of news and opinion plus exclusive commentary from New York Times journalists.

So far, Canadians have shown a remarkable equanimity toward the influx, one of the highest per-capita immigration rates in the developed world. While polls show a gradual uptick in concern about the flow of new arrivals, mostly tied to unskilled Syrian refugees, the country on the whole remains welcoming to outsiders.

But non-Canadians are already crowding out local students at some of the country’s best-known schools. International students at McGill University in Montreal make up a quarter of total enrollments. In British Columbia, where students from abroad make up 18 percent of the total enrollment, people in the province are beginning to grumble that locals are being passed over in favor of non-Canadians who pay higher fees.

The University of British Columbia created a controversy with its plans to spend 127 million Canadian dollars, roughly $95 million, to build a school, Vantage College, for international students — mostly Chinese — who need to improve their English before matriculating at the university.

Similar tensions have plagued schools in the United States that increasingly rely on tuition from international students to balance their budgets.

International students typically pay more than domestic students, and many, particularly from China, come from affluent families eager to establish a toehold in North America. The money these students bring helps subsidize education for domestic students, but can also distort local economies.

About half of Canada’s inbound students come from China and the government wants even more. Former Immigration Minister John McCallum, recently named ambassador to China, met with Chinese officials in August, hoping to double or even triple the number of Canadian visa application centers in mainland China from the four the country has now, not including Hong Kong.

Amit Chakma, the president of the University of Western Ontario who led a 2012 government advisory panel that developed the core of the government strategy, said there was plenty of capacity among smaller, high-quality institutions in Canada that are struggling to fill their classrooms as applications from high school graduates fall.

Indeed, it’s not just major cities that are attracting students from abroad. High schools, colleges and universities across the country are seeing an influx of international students. The fastest growth in the past year has been on tiny Prince Edward Island, Canada’s smallest province. Yukon College’s website, meanwhile, has been translated into Chinese, Japanese, Korean and Portuguese.

Even the broad middle of the country is getting its fair share. The Saskatchewan Institute of Applied Science and Technology in Regina, for example, has expanded its International English Language Testing System program to meet the demand, which has doubled, by non-Canadians who need to pass the English proficiency exam for immigration requirements.

Jack Wu, who arrived from China, manages the design of circuit protection systems for hydro-electric transmission lines. He studied at the College of the North Atlantic in St. John’s before earning an electrical engineering degree in 2005 from Ontario’s Lakehead University. He and his wife immigrated through a provincial program for people who have studied in Newfoundland and Labrador. The process from student to citizen took them about two and a half years.

“Our daughters were born here,” Mr. Wu said proudly, sitting in a Tim Hortons, the quintessentially Canadian fast-food chain. “They are Newfoundlanders.”