In protest of Trump entry ban, some scholars are boycotting U.S.-based conferences 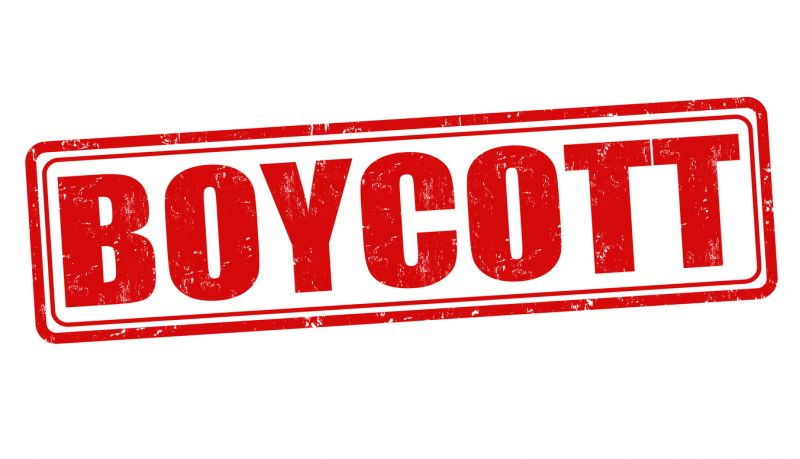 The new target of the academic boycott movement is the United States.

More than 3,000 academics from around the world have signed on to a call to boycott international academic conferences held in the United States in solidarity with those affected by Trump’s executive order barring entry by nationals of seven Muslim-majority countries. The ban on entry into the U.S. has left some students and scholars with valid visas stranded outside the country while others are stuck inside it, unable to leave the U.S. for personal or professional reasons for fear they won’t be let back in.

The entry ban, which affects nationals from Iran, Iraq, Libya, Somalia, Sudan, Syria and Yemen, has been widely condemned as discriminatory and as undermining values central to American higher education such as inclusion, openness and internationalism. Civil rights groups have described it as a pretext for banning the entry of Muslims, which Trump explicitly called for during his campaign.

“When we saw the recent news about what’s been dubbed the Muslim ban, we questioned what we could do as academics,” said Nadine El-Enany, a lecturer in law at Birkbeck School of Law at the University of London and an organizer of the call to boycott conferences.

“As academics, we felt that the best way that we could demonstrate very clearly that we are unwilling to benefit from privileges that are so unfairly, unjustly denied others is to refuse to take up those privileges but also to clearly indicate that our business, as educators, cannot go on as normal while such an emergency is happening,” said El-Enany, who has withdrawn from an upcoming conference on law, culture and the humanities hosted by Stanford University.

Signatories to the document calling for a boycott of international conferences held in the U.S. pledge not to attend them while the ban is in place. The document goes on to state, “We question the intellectual integrity of these spaces and the dialogues they are designed to encourage while Muslim colleagues are explicitly excluded from them.”

Academics abroad have been publicly weighing an academic boycott on social media and in newspaper commentaries in recent days. Helen McCarthy, a reader in history at Queen’s University London, published a piece in The Guardian asking, “Should we change our plans in solidarity with our banned colleagues, or would doing so only isolate U.S.-based scholars whose critical voices are needed now more than ever?”

In the article McCarthy summarized the responses to a Twitter thread she initiated on the subject. The thread, she wrote, yielded diverse opinions and no consensus: some questioned whether a boycott would achieve anything useful or whether it could be damaging, while others saw it as an important act of solidarity. “Others advocated moving all meetings to other countries, although [they] recognized this would penalize U.S. scholars unable or unwilling to travel for fear that re-entry could be denied,” McCarthy wrote.

McCarthy’s piece also discussed issues of perceived personal safety. Formal boycott calls aside, some academics have expressed concern about traveling to the U.S. due to concerns about racial profiling and increasing concerns about racist and specifically anti-Muslim attitudes and actions.

​Nadya Ali, a lecturer in international relations at the University of Sussex, wrote in a piece for Times Higher Education that she has decided to withdraw from participating in the International Studies Association’s annual convention, which will be held in Baltimore in February. “This is an important date in the calendar of those who work in international relations,” Ali wrote. “However, Donald Trump’s election victory, which followed a campaign during which he raised the prospect of Muslim registers and internment and which provoked a spike in hate crimes against minorities, has combined with my previous experience of being racially profiled by a U.S. airline and airport staff while traveling to attend the ISA’s 2013 convention in San Francisco to convince me that the personal cost of attending this year’s event would be too high. I now feel — and I doubt that I am alone in this regard — that I would be genuinely and immediately unsafe in the U.S.”

In the wake of the travel ban, academics publicly debated on social media whether it would be ethical to attend ISA’s conference when some of their colleagues could not. For example, Megan MacKenzie tweeted, “Is traveling to a conference in the U.S. ethical when your peers cannot (or are afraid to)? Asking for a friend. #MuslimBan #ISA2017”

“I’m still conflicted, to be honest,” said MacKenzie, an associate professor in the department of government and international relations at the University of Sydney. MacKenzie is chair of the ISA’s section on feminist theory and gender studies, so she’s signed on for significant administrative responsibilities at the convention.

“I’m really moved by arguments that business as usual and traveling under a ban when colleagues and friends cannot is complicit. I understand that argument. I really do,” MacKenzie said.

“And I also empathize with the argument that this is a space for intellectual exchange and potentially for collective action, so disrupting that opportunity has lasting impact. Some individuals, especially grad students and early-career scholars, they might have invested all of their travel funds for a year into this conference. I’m sure by now they have tickets, etc., so if they don’t go to this conference, that’s it — not just for the ISA, but for the year.”

“Bottom line, I would like everyone to support each other no matter what their decisions are,” she said. “If they see the conference as a source of collective action and very important in terms of intellectual exchange, great, but they should also respect those colleagues that feel anxious or have made a conscientious decision not to go.”

The ISA issued a statement this weekend saying it would refund registration fees to those denied visas or entry into the U.S. for the convention. The statement also discouraged scholars from boycotting the event.

“Although we recognize that some are urging a boycott of the Baltimore convention because of the imposed travel ban, we strongly encourage everyone who can to come to Baltimore,” the statement said. “That way, we will have the opportunity to discuss how to move forward as an association in this changed reality. Otherwise, we allow further suppression of our scholarly interactions.”

Unlike statements from some other academic associations and university leaders, the ISA statement did not condemn the entry ban — though it did express the leadership’s deep concerns about its implications. The statement cites the group’s nonprofit status, “which prevents the association from taking partisan stands on policy issues.”

Some members saw the ISA’s statement as insufficient. In a post for the international relations blog Duck of Minerva, Charli Carpenter, a political science professor at the University of Massachusetts at Amherst, expressed astonishment at what she described as the ISA’s “tepid” response.

“I have been waiting for the past few days to see how the International Studies Association would respond to news of Trump’s executive order banning entry into the U.S. for many travelers, including those from a number of Muslim countries — since this ban obviously affects numerous of our colleagues who are, like many of us, slated to travel to the International Studies Association Conference in Baltimore, Maryland, U.S.A.,” Carpenter wrote. “Would the ISA issue a condemnation of this policy? I wondered. Would they offer support and reassurance to colleagues trapped outside U.S. borders? Would they announce arrangements to Skype in scholars unable to appear in person? Would they consider relocating the conference to Canada or elsewhere abroad, if not this year then in future years?”

“Astonishingly, the ISA promises to do none of those obvious things. Instead, ISA simply promises not to penalize any international travelers affected by the ban, urges members not to boycott the conference, and informs us the ISA cannot take stands on political issues. As my co-blogger … points out this tepid response is not nearly adequate to the situation at hand and it is in fact an insult both to our comrades from targeted Muslim-majority countries or on green cards, as well as to all of us who are taking political risks to speak out and resist these draconian and dangerous policies.”

Mark A. Boyer, the executive director of ISA, said in an interview that the statement released this weekend was intended “to deal with the specific logistics around the upcoming convention, what happens for scholars who are going to potentially lose registration fees.”

He said the association’s academic freedom committee is circulating a separate draft statement responding to the entry ban, which according to the association’s processes would then be submitted to the executive committee for its consideration. In regard to the question of where to hold future conferences, Boyer said that’s an issue that he expects will be taken up by the association’s governing council at its meeting in Baltimore. The association already has contracts for the next six annual meetings after the one in Baltimore: San Francisco in 2018; Toronto in 2019; Honolulu in 2020; Las Vegas in 2021; Nashville, Tenn., in 2022; and Montreal in 2023.

For the Baltimore conference, which is happening in about three weeks, Boyer said the association has heard from a small number of participants who cited Trump’s election as their reason for withdrawing. Boyer said the association has identified five registrants who are from the seven countries affected by the entry ban — although he noted that number may be an underestimate of the registrants directly affected, as it wouldn’t account for, say, a Sudanese scholar at a British or Canadian university.

“At the most general level, I think the issue is that we are trying to be very thoughtful about everything we do,” Boyer said. “We know it’s impacting scholars from around the world, and that these are not any easy decisions that we’re making at this present time.”

Source: In protest of Trump entry ban, some scholars are boycotting U.S.-based conferences