Will Michigan’s Free-Tuition Guarantee Change the Game for Low-Income Students? – The Chronicle of Higher Education 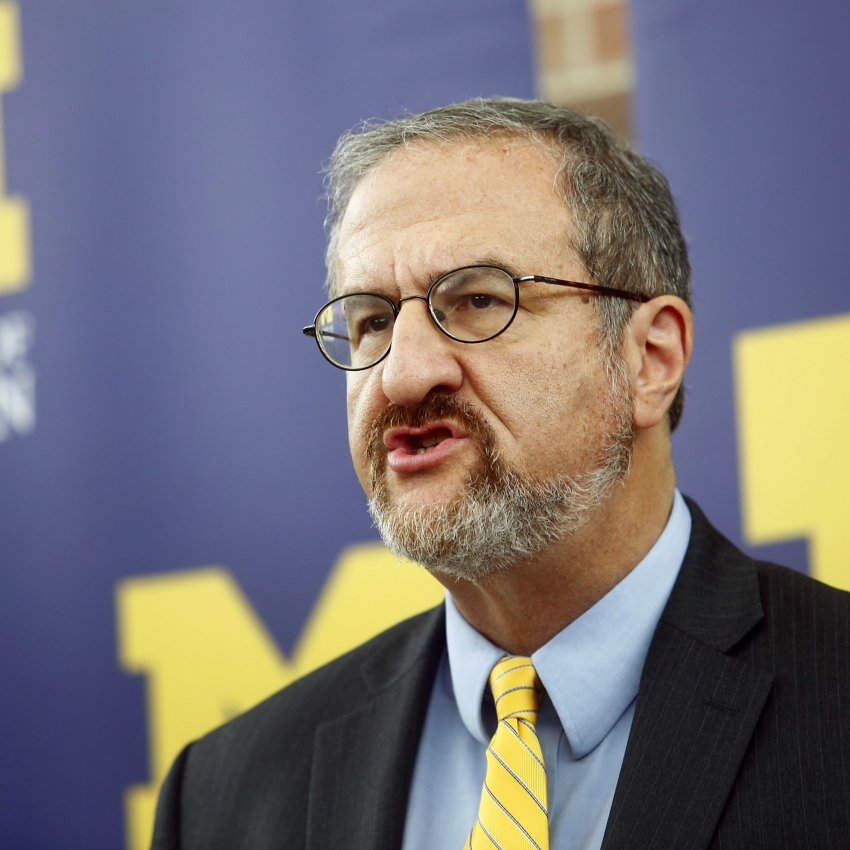 Starting in January, the University of Michigan at Ann Arbor will guarantee free tuition for all in-state undergraduates with an annual family income of $65,000 or less. Many observers cheered the announcement on Thursday, but some higher-education experts greeted it with skepticism. After all, many low-income students receive free tuition through existing financial-aid programs. And what about student fees and living expenses not covered by the plan? Would such a guarantee really make a difference?Those questions misunderstand a critical part of what the university calls its Go Blue Guarantee, said Mark S. Schlissel, the university’s president, on Friday in an interview with The Chronicle.

For students and families who look at a prestigious university like Michigan and believe they will never be able to afford it, the Go Blue Guarantee will explicitly communicate to them that their tuition will be covered and that cost should not hinder them from applying, Mr. Schlissel said.

“That’s an aspirational message,” he said. “It’s a message of hope and of future success to lots of schoolchildren.”

The program was inspired by the results of an as-yet unpublished experiment the university conducted, Mr. Schlissel said, to see how it could best attract high-achieving, low-income students at local schools with scholarships that covered four years of tuition. The university found that prospective applicants who were explicitly told they were guaranteed four years of free tuition if they were admitted applied at two and a half times the rate of those who were told only that Michigan had generous need-based aid.

“Helping someone understand affordability with a term like ‘free’ and ‘guarantee’ is such a powerful motivator that we hope it helps us drive up the fraction of students on our campus from this lower half of the income range.”

“Helping someone understand affordability with a term like ‘free’ and ‘guarantee’ is such a powerful motivator that we hope it helps us drive up the fraction of students on our campus from this lower half of the income range in the state of Michigan,” Mr. Schlissel said.Michigan’s new program, like many similar efforts, is “last dollar,” meaning it covers the tuition that remains to be paid after other grants are applied to it. As a result, a student is less likely to have grant aid left over to cover other educational expenses, such as room and board.

While many Ivy League institutions cover tuition, room, and board for low-income students, Michigan is one of the few public research universities to offer a free-tuition program.

But critics of the program said that to truly benefit low-income students, Michigan would need to focus on improving the accessibility of the university, not just its affordability. Sara Goldrick-Rab, a higher-education policy and sociology professor at Temple University, said that tuition is not the real barrier to enrollment at institutions like Michigan, as it can be at community colleges.

With a healthy endowment, Ms. Goldrick-Rab said, Michigan could afford to do more, such as covering living expenses and student fees, which are more often financial burdens.

And even if the program’s messaging encourages more low-income students to apply, she said, there’s no guarantee that they will be admitted or could afford the other costs of attending college.

“I see a difference between empty advertising and effective communication to students. In some cases, you do need to tell students where it already really is free and they can get in.”

“I see a difference between empty advertising and effective communication to students,” Ms. Goldrick-Rab said. “In some cases, you do need to tell students where it already really is free and they can get in. … But here, you could boost applications among low-income students that can’t get in. What are we doing to them?”Ms. Goldrick-Rab said that increasing the number of low-income students at a university like Michigan — where just 8.4 percent of students fall in the bottom 40 income percentiles — would require changes in the admissions standards, such as dropping standardized-test scores as requirements. “I do not mean lower them; I mean change them,” she added. “There’s nothing lowering about not requiring test scores because test scores are actually not that predictive of anything.”

But Mr. Schlissel said that it’s “cynical” to criticize Michigan’s program. “The fact that a public university has spent decades developing philanthropy and organizing its priorities to heavily subsidize the cost of attendance for students based on their means — I think that’s a wonderful thing,” he said. “Tuition isn’t the only cost of attendance, but a four-year free-tuition guarantee to the University of Michigan is worth about $60,000, so — my gosh — I would say, ‘Thank you,’ and then, ‘Let’s look for other ways to help students bridge the gap.’”

Mr. Schlissel said that because state governments have not done enough to financially support public universities, individual institutions have had to step in and conduct large fund-raising campaigns — such as Michigan’s $4-billion capital campaign, with $1 billion dedicated to student aid — to meet students’ needs.

“That’s a role government should be playing, but state governments have pulled back, and they’re no longer supporting universities to the point where we can literally promise a quality education.”

“To me, that’s a role government should be playing, but state governments have pulled back, and they’re no longer supporting universities to the point where we can literally promise a quality education to all talented, hard-working students,” he said.New York, Oregon, and Tennessee are a few of the states where free tuition for some type of higher education for in-state students is covered by the government. But in many cases, those guarantees carry restrictions on where recipients can work after they graduate, or requirements that they live on campus.

But as state legislation for free-tuition policies has lagged, experts in higher-education policy like Ben Barrett, a program associate with New America, said Michigan’s program is at least a step in the right direction.

“It’s hard to predict how long this legislation will take to move through states,” he said. “We saw New York move pretty fast, but it’s just highly, highly variable, and it just depends on the political will in the state and how hard legislators are willing to fight for it.”

Source: Will Michigan’s Free-Tuition Guarantee Change the Game for Low-Income Students? – The Chronicle of Higher Education