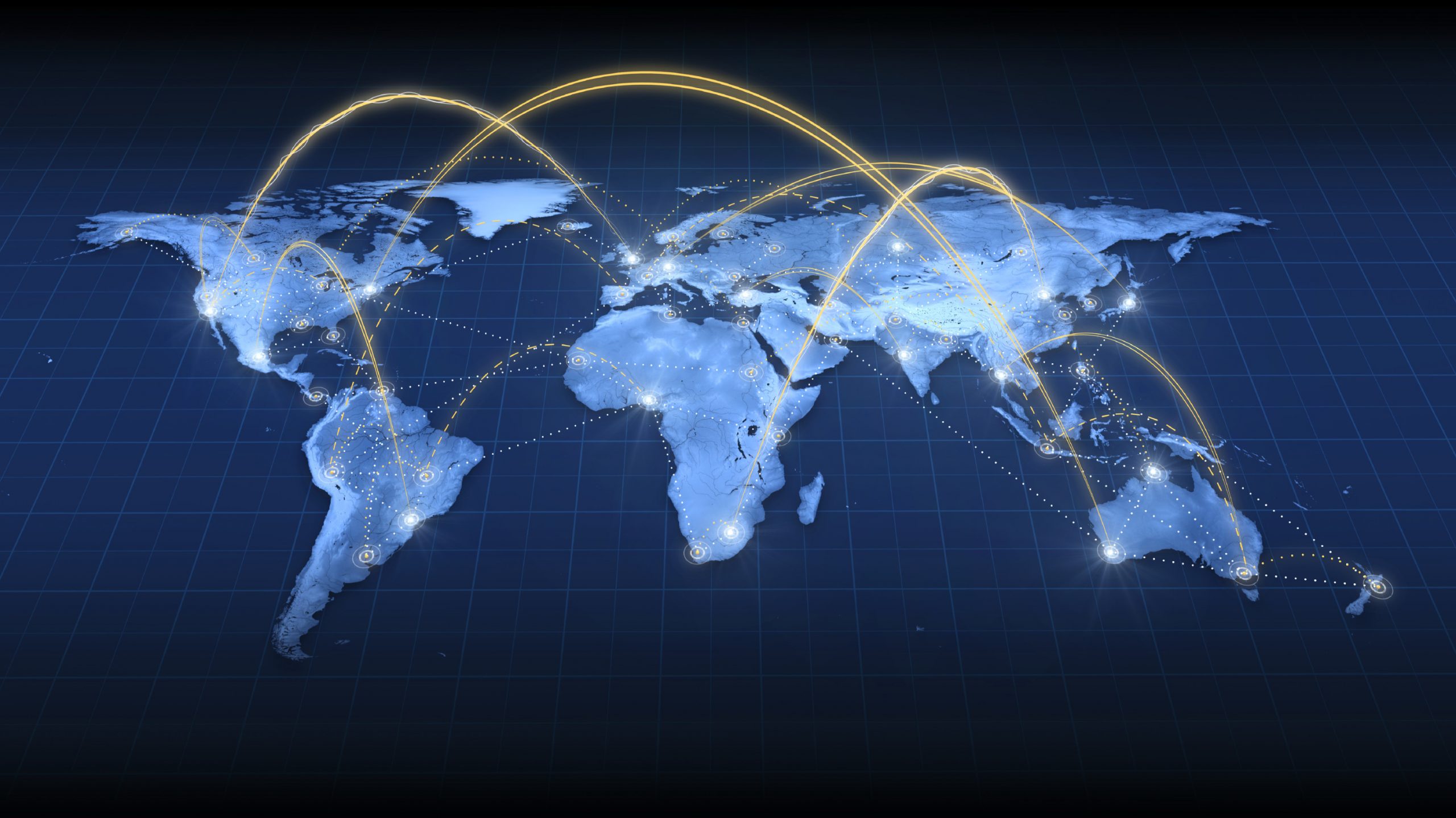 Survey results released Thursday offer a first look at yield rates of prospective international students — that is, the percentage who accept an offer of admission for the fall — and suggest that universities may see different patterns depending on where in the U.S. they’re located.

The yield rate for international undergraduates declined modestly from 26 to 24 percent from fall 2016 to fall 2017, a dip that’s on par with a decline in the domestic student yield rate from 30 to 28 percent, according to a survey conducted by the Institute of International Education in conjunction with four other higher education groups. However, the overall two-percentage-point drop masks significant variations in yield rates across regions — with the biggest declines in yield rates reported by institutions in Southern states — and colleges in general are reporting high levels of concern among some groups of prospective international students about their safety and ability to obtain a visa.

Meanwhile, 46 percent of graduate school deans reported declines in yield rates of two percentage points or more at the master’s level, and 31 percent reported such declines at the doctoral level, according to a separate survey from the Council of Graduate Schools. The CGS survey did not ask about absolute yield rates, but asked instead about relative declines and gains compared to the fall 2016 admission cycle.

The context for these two surveys is the widespread concern that large numbers of prospective international students might stay away from the U.S. due to perceptions of a less welcoming climate toward immigrants and international visitors and difficulties obtaining a visa under what President Trump has described as more “extreme vetting” processes. Higher education professionals have also expressed concern about the unwelcoming message sent by Trump’s partially blocked travel ban barring entry for nationals of six Muslim-majority nations (a legal challenge to the ban will be considered by the U.S. Supreme Court in October) and there is continuing uncertainty about what changes, if any, the Trump administration will propose for the H-1B visa program, which many international students use as a pathway to work in the U.S. (Trump directed a review of the H-1B visa program in April, though it’s worth noting that one possible change floated by the administration — adjusting the lottery to give an advantage to master’s degree holders — could potentially benefit international students).

A survey released this spring showed that nearly four in 10 colleges reported declines in the number of international student applications they received from fall 2016 to fall 2017.

“We need to be mindful of where the survey’s coming from,” said Rajika Bhandari, the head of research, policy and practice at IIE. “Over the past six or seven months, there’s been so much anxiety and speculation in U.S. higher education about whether international students will continue to come to the U.S. in large numbers.”

“The fact that our findings show that in fact there’s just a two-percentage-point drop in admissions yield compared to last year to me is a pretty big finding in that it shows us that the situation is not as dire as everybody had predicted,” Bhandari said. “In terms of what does that mean for institutions, it could go either way. What we did hear from institutions is that many of them were continuing to receive acceptances of admissions offers from international students and that the process wouldn’t be completed for a while. It could mean that when we look at international enrollments, numbers might be up by a small amount or they might decline by a small amount. It’s too small of a difference to predict a definitive trend this fall.”

The IIE-led survey, which is based on responses from 112 institutions that together account for about 16 percent of all undergraduate international student enrollment, found variations across geographic regions. Institutions in the South saw the biggest decreases in admissions offers to international students (down 13 percent) and in yield (which fell by five percentage points, from 35 to 30 percent).

Asked whether this might be a blue-state/red-state situation, Bhandari said, “It’s possible. We know international students are very savvy consumers of information and that they look at all of these things very carefully when they make their decisions. We know that in Texas, possibly because of the gun-carry law, there may be more of a concern on the part of prospective students about their personal safety. If one were to correlate this further, our findings do show that Indian students are more concerned about their personal safety in the U.S. than students from some other regions, and we know that Texas has always attracted a very large number of Indian students.” 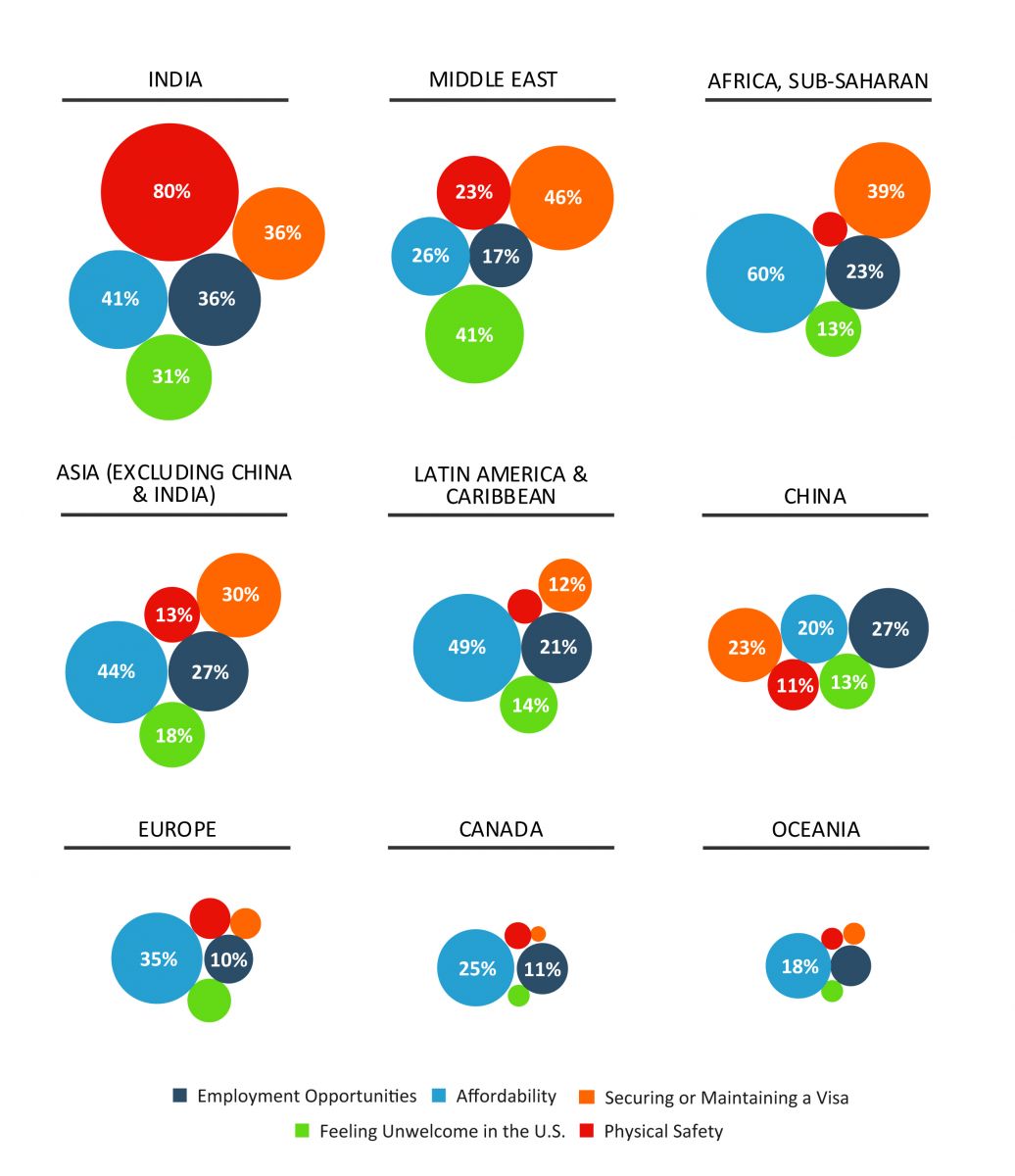 Courtesy of the Institute of International EducationEighty percent of university officials who responded to the survey reported concerns among admitted Indian students about physical safety, and 31 percent cited concerns about admitted Indian students feeling unwelcome in the U.S. (see figure at left). The shooting of two Indian engineers, one of whom died, in a bar in Kansas in February in what is believed to have been a racially motivated attack has been extensively covered in the press in India.

Institutions reported that students from China, by contrast, were most concerned about postgraduation employment opportunities. China and India together account for close to half of all international students in the U.S. The universities that responded to the survey reported that their admissions offers to Indian students increased by 12 percent, while yield declined from 27 to 23 percent. For Chinese students, institutions reported an 8 percent increase in admissions offers and a decline in yield from 25 to 23 percent.

“With large applicant pools in past years and minimal concerns raised by Chinese students over safety or visa processing, stability within the [East] Asian student market appears to persist, barring any possible changes to immigration policy that impact employment opportunity, since that issue is of most concern to Asian students according to the survey,” the report on the survey results states. “Although application totals appearing [sic] to largely remain stable, yield rates and a concern about personal safety suggest the possibility that Indian students may not continue to grow as the second-largest international group in U.S. higher education. Their concerns may lead some Indian students to accept admissions offers from other leading host countries, especially from those that issue student visas more quickly.”

“The Middle East student population may be the most concerning,” the report continues. “Middle Eastern and North African students accounted for 12 percent of international undergraduates in 2015-16, but a decrease in applications coupled with substantial and valid concerns from students and admissions professionals suggests possible declines in the number of students traveling to the United States from the Middle East and North Africa for their education.”

The fact that 46 percent of graduate deans reported declines in yield rates for prospective international master’s students is a data point that’s likely to be especially concerning to universities, given that master’s and certificate-level students accounted for 78 percent of first-time international graduate students at U.S. universities in fall 2016, according to Council of Graduate Schools data.

In its separate survey of graduate school deans, the council found that the percentage reporting declines in international student yield rates for doctoral programs was lower, at 31 percent, but there were variations across types of institutions, with deans at the less research-intensive universities (R-2 and R-3 institutions) more likely to report declines in yield than the more well-known, most research-intensive (R-1) universities. Forty-two percent of graduate deans at R-2 and R-3 institutions reported declines in yield for international doctoral students, compared to only 27 percent of deans at R-1 institutions.

In an article on the CGS website, Hironao Okahana, the group’s assistant vice president for research and policy analysis, wrote that “the decline in admission yields suggests that fewer students are willing to take up opportunities to pursue graduate education in the United States, even when acceptance into a degree program is offered to them. Prospective international graduate students appear more likely, in particular, to turn down those opportunities at the master’s level, as well as at R-2 and R-3 institutions. While the survey cannot pinpoint particular factors that might be shaping such shifts, the uncertainty with prospects of postgraduate school employment under optional practical training and/or H-1B visa programs, as well as opportunities to pursue graduate education in other English-speaking countries, may in part explain some of [the] declines graduate deans are observing.”