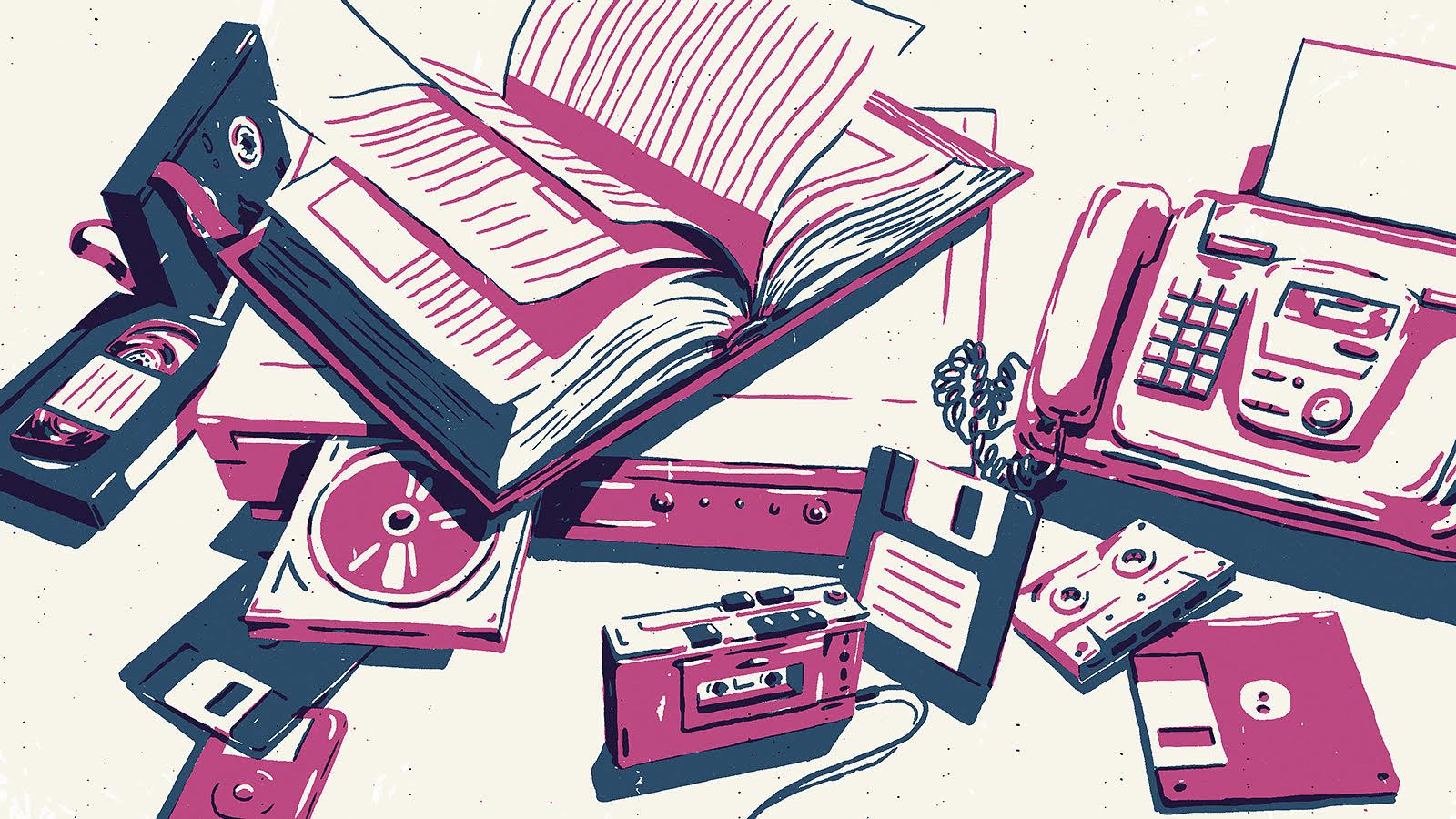 This is the second in The Vanishing University, a four-part series exploring the tech-driven future of higher education in America. Here are parts one, three, and four.

A new copy of Glenn Hubbard and Tony O’Brien’s widely used introductory economics textbook costs more than some smartphones. The phone can send you to any part of the web and holds access to the sum of human knowledge. The book is about 800 heavy pages of static text.

Yet thousands of college students around the US are shelling out $250 for these books, each semester, wincing at the many hours ahead of trying to make sense of this attempt to distill the global economy into tiny widgets and graphs. It’s a lot of money for what often feels like mind-numbing, low-grade torture. And it’s tradition. Many of their parents did it before them. It is a rite of passage.

Hubbard, dean of Columbia Business School, and O’Brien, his co-author, have spent the last three years transforming their classic textbook into a product that can only be described as “education software.” Hubbard and O’Brien worked with an editor for a year and a half to determine what material would be text, and what was better suited for video or interactives. They then spent the same amount of time testing the book on students and professors. The new, virtual version makes its debut this fall. (And it’s one of the resources Texas A&M professor Jon Meer plans to use for his core undergraduate microeconomics course that is going online-only this year for the first time.)

This is the beginning of the end for college’s least enjoyable semi-annual tradition: when kids at the start of each semester have to trek to the school bookstore and walk out textbook-laden, wallet-light. On average, US college students end up spending about $1,200 on books a year.

For the next generation of students, all those woes may be as obsolete as cassettes and Blu-Ray. Hubbard thinks the new iteration of his textbook—if it can still be called that—will revolutionize teaching and learning. As he sees it, though, the world changed first: Students today already learn differently than their parents did. Kids entering college this fall have grown up with Google (which is 19 years old) and the iPhone (now, 10 years old). They expect content that responds to them.

How they study—and how they pay to do it—will soon look nothing like what it used to.

Textbooks get a tech bump

That Hubbard and O’Brien were able to embark on the project is down to their publisher, Pearson, one of the world’s largest textbook producers. Silicon Valley loves coming in and wreaking havoc on traditional industries. But something weird is going on in the textbook world: It’s disrupting itself.

For a while, Pearson had been offering digital versions of textbooks that were simply the same book, just in electronic form. Its new products are markedly different. Instead of buying a book, students pay for a semester-long subscription to software that can be consumed on any device—consumed, not read. The new textbook has fewer words, more interactive exercises, videos, and animation—which also means less reading.

Hubbard tells Quartz, given how popular his book is, the scope of what he has built is bigger than anything before:

I’d been asking for this for years. Once they digitized my book, it seemed they were not taking advantage of the medium—and we could do so much more than simply have the text online.

While some other academic subjects, sociology, psychology and environmental science, have already started phasing out paper books, it’s unheard of for the field of economics, which relies heavily on numbers and visual representations of dense concepts.

Textbooks of the future are about much more than just reading, says Tim Bozik, head of global product at Pearson. Students must watch videos and complete exercises. The videos and interactive works aren’t merely repeating reading material—some concepts are presented exclusively in those formats. How well students complete the materials also determines how quickly they progress.

Pearson’s David Alexander estimates the new economics product contains only half the text the original Hubbard and O’Brien book did; the one thing that remains are neon highlights marking the text.

Pearson will sell these new Hubbard and O’Brien subscriptions—which is what they are—for a $90 a semester. That seems a loss for the company—until you realize that it’s impossible to take the professors’ course without a subscription. An individualized subscription service means every student is required to pay full price, every new semester. No more “I forgot my textbook, I’ll just share.”

The hefty cost of paper textbooks is down to the fact they are large, unwieldy, and colored-ink-sucking. Textbook producers must also make a large share of their money in the first semester a book is released; once a book is out for a few months, profits are undermined by the secondhand market. To keep textbooks profitable, authors regularly update them with new editions. Such practices have been decried as an unfair scam by many generations of students—so some have gotten savvier, finding books via online sellers, rental startups, or illegal downloads.

With these new digital textbooks, students also come out ahead, though. Most students don’t end up actually paying $250 because they can pawn off the book after the course’s end. But resale prices are unpredictable—they depend on whether the book will be used in future semesters. That $250 textbook might cost a student $100 in the end—or it might cost them the full $250. With a subscription there’s nothing to resell at the end of the semester and no price uncertainty. A $90 flat fee paid easily through one’s laptop, when compared to the wavering end value of the cumbersome $250 physical book, is unquestionably a better deal.

Watching you, watching me

Like music or news or anything else that’s moved to the internet, the benefit to the textbook online is that it can evolve—continuously, seamlessly—in a heartbeat.

Pearson recently partnered with IBM Watson to bring artificial intelligence to textbooks; when students struggle with certain concepts, they might be given supplemental readings, extra quizzes, even a virtual tutor. The textbook of the future is, in its ideal form, a choose-your-own-adventure.

With tech upgrades come the inevitability of data collection. The new software benefits professors by tracking how far students read, how long they spend on each page, how well they absorb the material—so rather than handing out syllabi to tell students what to read or skim in various books, professors can tweak the software to only include topics of crucial interest. Pearson also encourages them to add their own examples and share advice with teachers around the world.

This sort of teacher collaboration is seeing a spurt of growth around the world, according to TES, a global education company that offers a massive international forum for teachers to upload and download each other’s materials. And teachers want to grow. The majority are eager to move from “boring, chalk-dusted technophobes” to “tech-savvy pioneers,” TES global CEO Rob Grimshaw says.

“We need to change the classroom model,” says Sam Chaudwary, CEO of ClassDojo, a popular classroom-management app that helps teachers communicate with parents and students. “Effectiveness, not efficiency.”

Pearson’s new textbooks (again, “textbooks”) are a tailored, interactive learning experience, with material many times more engaging than that of their predecessors. They give professors feedback on which students are struggling or falling behind in their classes, long before it comes time to administer an exam. But the burning question that remains is how the new software will change learning.

It seems students will understand economics better after reading the new version of Hubbard and O’Brien than a traditional book. Yet maybe there was more to the experience than just getting the lessons. Before, making sense of the reading took effort and could be boring. Mastery required discipline and perseverance. There’s also value in finding one’s own way to connect with the reading.

Analog textbooks also offered privacy. Professors didn’t know how students spent their time. If a student wanted to blow off his reading, no one knew and it was his problem to manage. The hands-off learning model provided students with another skill college is meant to provide, accountability and time management. Maybe college should be a time to learn how to think and discipline yourself, even when faced with a boring, odious task that consumes far too many hours of your time.

Hubbard points out many students already learn differently. They’ve only known content that responds to them. They’ve lived their lives on social media and may have a different sense of privacy.

Jerry Ramirez, who has almost finished his double major in economics and computer science at A&M where he took several courses that used digital interactive textbooks, says that “aside from the technical difficulties—sometimes there’s a problem or the book crashes and the professor doesn’t know what to do—I’d say people like the shift. What’s crazy is that I look at underclassmen and some students have never known anything else. It’s interesting to see that difference, even over the four years I’ve been here.”

Some skills that are critical to success as an adult came embedded in the old physical textbook. With the new software come, naturally, a new set of skills to be learned. Perhaps they’ll be more useful in future economy. The world’s already changing: It’s faster and more streamlined; rarely do people need to sit down and confront hours of inefficient, extraneous work. That type of mind-numbing concentration—like physical texts themselves—may already be well in the past.