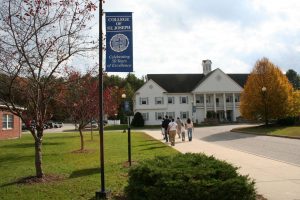 The College of St. Joseph board of trustees is considering closing the school.

“The CSJ trustees are considering a number of options,” Board President Arthur Kenlan said Thursday evening. “Like Castleton and other schools, our enrollment is always a challenge and is a challenge now. … It’s been pretty tough for several years.”

Those options are scheduled to be considered at a meeting at 2:30 p.m. Monday. CSJ President Larry Jensen invited the entire college community to that meeting in an email sent out late Thursday afternoon.

He said the meeting would be “most likely” held in Room 105 of St. Joseph Hall.

Jensen’s email said no decision would be made at that meeting, but the trustees would decide on a path forward at a second meeting, scheduled for May 7 in Tuttle Hall.

Kenlan seemed less confident that the board would be ready to make the call that quickly.

“It’s an ongoing discussion, I think, at all schools — where they are in terms of enrollment and how those numbers match up with the needs of schools,” he said. “… I can’t tell you how long it’s going to take to make a decision like that.”

Melissa Knipes, president of the alumni association, said three more meetings — 2:30 p.m. May 1, 2 and 3 in room 202 of St. Joseph Hall — had been scheduled for students, faculty and staff to share their thoughts with the trustees.

Knipes said she was also working on a message to the alumni about the situation that will be sent out Friday.

“I don’t want to speak on their behalf yet because they don’t really know,” she said, declining to comment further.

Kenlan did not have enrollment or revenue numbers at his fingertips when he was reached at home Thursday evening, and Jensen could not be reached for comment.

But Jensen’s email to the college community discussed some of the issues facing the school.

“Right now, acceptances and deposits for next year are not great,” he wrote. “That can be changed. Admissions is working hard to get more applications. It is important going forward that we increase this number. Last year we started the school year with 199 full-time undergraduate students. We really need to increase this number. We originally hoped to be over 250 for next year.”

Jensen said it was important for current students to continue attending CSJ in the fall, and that they would know their options in 10 days.

“If the college closes, we will work to find an option for each of you to continue your education in a place that will accept all of your credits and where the tuition will be approximately what it is here,” he wrote.

Jensen said that the current academic year would be completed and that graduation would be held.

“There are several options to raise more money to support the college,” he wrote. “They are not immediately available, but could happen over the next year. They include selling buildings or property, refinancing and new programs. In short, there are more questions than answers right now, but we will know much more in the next 10 days. Your future education will be provided regardless of any decision about CSJ.”

Mayor David Allaire called the news “troubling” and said he would like to see city government make an effort to help save the college, though he wasn’t sure what form that would take.

“The college has been a primal part of the community and we certainly want them to succeed,” he said. “It’s been a very positive influence on the city in terms of attracting young people to the community.”

Board of Aldermen President Sharon Davis also said the college was an important part of the city.

“The college has been around for a long time,” she said. “It certainly has helped a lot of the local kids that went there.”

Davis said CSJ has played an important role in developing the local workforce, and also lauded the college’s relationship with Mount St. Joseph Academy, which has given MSJ graduates extra help when they go on to college at CSJ.

“That’s a great opportunity for kids who might not be able to afford college,” she said. “It’s an important entity in this community. If the city or the board can play any kind of a role, we would be open to that.”