What Happens When a College Flip-Flops on Using Race in Admissions? – The Chronicle of Higher Education 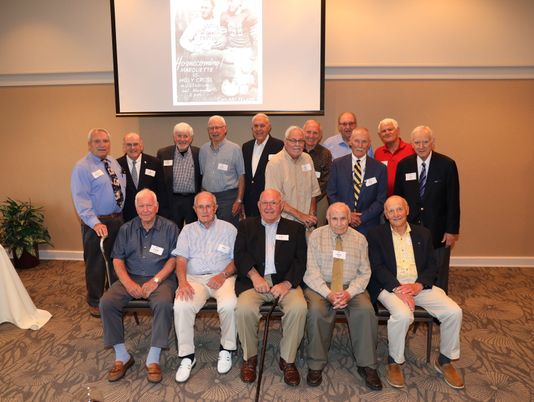 Jeff Messerknecht remembers exactly where he was when he heard that Marquette University was dropping football.

The tackle was one of the best players on a team that finished 3-6 in 1960. The junior was hopeful that the returning talent would lead to a better season in 1961.

It wasn’t meant to be.

“A friend came to visit and we were driving down Wisconsin Ave.,” Messerknecht said. “Heard the news on the radio. We just didn’t believe it. It was a shock to everyone because we hadn’t heard anything.”

Rev. Edward J. O’Donnell, S.J., made the announcement on Dec. 9, 1960. He said the athletic program was $50,000 in debt and would stop fielding teams in football, track and cross country.

Messerknecht gathered with his teammates on campus. Most were shocked. Some were happy they didn’t have to play spring ball.

Messerknecht and his teammates were the last members of what is probably the school’s most exclusive fraternity. MU figures close to 200 former MU football players are still alive.

Sixteen of the players gathered at MU’s Alumni Memorial Union on Saturday. The reunions started in 1959 to honor the 1953 team that was 6-3-1. The events continued every five years, then three years and eventually opening up to all former players.

Lou Gral, a defensive end from 1952-’55, and Stan Andrie, who played offensive guard in the same era, help plan the get-togethers. They hold the reunion every year.

Andrie can still rattle off the narrow defeats of that 1953 team, which is considered one of MU’s best.

Like most reunions, there were a lot of tales (maybe told with some embellishment) and good-natured ribbing among the ex-players. They pointed out former teammates during a slideshow of pictures from their playing days.

Jaren “Jerry” Hiller, 91, and Frank Kopenski, 88, were the old-timers of the group and took turns making fun of the “kids” who played in the late 1950s.

And while Hiller and Kopenski might not move as quickly as they did in their athletic primes at the old Marquette Stadium, their minds could recall minute details from games that occurred over a half-century ago.

“We had the T-formation. Our coach, Frank Murray, was the designer of the T-formation,” Hiller said. “He was the coach from ’46-49 and then (Lisle) Blackbourn came in.” 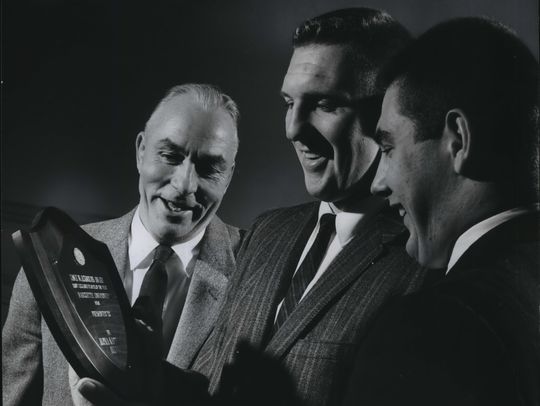 Blackbourn was the face of MU football, then called the Golden Avalanche, from 1950-’53 before coaching the Green Bay Packers for three seasons. He came back to lead the final two MU teams, who by then were nicknamed the Warriors.

“We had them down in the fourth quarter, but they came back to beat us, 20-14,” Kopenski said. “We couldn’t stop them because our captain – he was our safety man – got hurt.

“Billy Jack, the movie star (actor Tom Laughlin, who died in 2013), he came in as the safety man, blew the coverage and we got beat.”

Some of the former players talked about teammates who never forgave the university for getting rid of football.

The ones who attended the reunion, however, continue to be big supporters of MU athletics. The group helps sponsor an endowment for student-athletes, with Golden Eagles men’s soccer player Ruben Sanchez getting honored this year.

But the number of former MU football players keeps dwindling.

Before a group dinner, Gral read a list of nine ex-players who died in the last year. Members of the crowd mentioned a few other names that Gral did not know about.

There was a minute of silence to remember the deceased.

Then the group of former MU football players and their families returned to the pleasure of being in each other’s company one more time.