Goucher College says it’s eliminating liberal arts programs such as math, physics and religion, in attempt to keep costs down 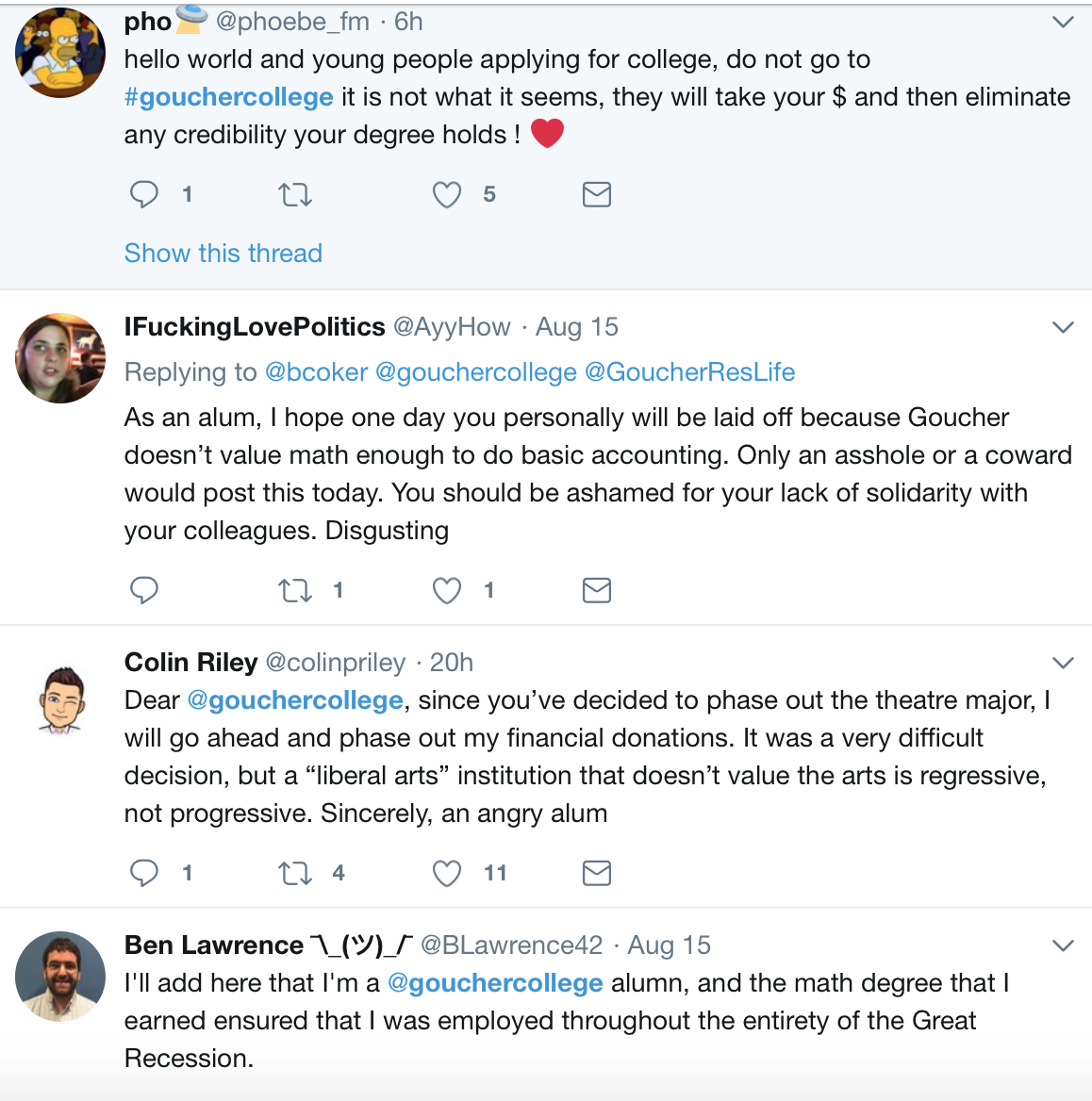 Goucher College is the latest institution to announce a series of program cuts following an academic prioritization process. Majors and minors in math, music, physics, religion, Russian and elementary and special education are being phased out, as are majors in studio art and theater, the college said this week. Book studies, German and Judaic studies will also be eliminated as stand-alone majors.

All current and incoming Goucher students will be able to graduate with their intended major under the current program, but the changes take effect thereafter.

In an all-campus memo, President José Antonio Bowen said that Goucher will do “everything we can to keep disruption to a minimum, but it is imperative that resources are allocated in ways that best support as many students as possible.”

There “is no financial crisis; in fact, after a very thorough review this summer, the Standard and Poor’s retained its ‘A-’ bond rating for Goucher,” he added. “Raising costs and continuing to increase the number of options per student, however, is no longer a possibility. We are determined to offer the best education for a price more people can afford.”

This is not the first time that Goucher has undergone an academic program prioritization process, or a metrics-driven evaluation of degree tracks to make decisions about funding and resource allocation. But it is the first time such an evaluation at Goucher has resulted in the elimination of so many programs, and especially programs that are considered part of any liberal arts college’s mission.

Yet Bowen in his message said that Goucher remains grounded in the liberal arts.

“Despite many competitors shifting away from a traditional liberal arts model,” he said, “Goucher remains almost uniquely committed to being a modern liberal arts college. We have long resisted the temptation to adopt more of the vocational programs currently in vogue with segments of the American public. Any new programs we offer will be interdisciplinary and in the liberal arts tradition. We have chosen this path carefully and strategically.”

Bowen said Goucher will continue to offer “robust math and physics courses to prepare students for careers in science, computer science and medicine, but very few students were interested in them as stand-alone majors.” The college has plans for a new Science Research Center, and construction of “much-needed new lab space for biology, chemistry and environmental science” will begin next year.

As for the arts, Bowen said that they’ll be an “essential pillar of the liberal arts at Goucher.” But the vast majority of the students who participate in theater, music and art activities on campus “do not actually major in those fields.”

“We may even add more activities, opportunities, and ensembles, based upon student interest,” he said. “Dance is one of the largest majors on campus, and we have recently seen increased interest in film, digital art, and creative writing.” Individualized majors remain an option.

Some remain skeptical about Goucher’s stated dedication to the liberal arts. A group of alumni and others criticized the college on social media.

A number of professors in the affected departments did not immediately respond to requests for comment Thursday. Ann Duncan, professor of religion and chair of Goucher’s Academic Policies Committee, referred questions to comments she made to Goucher’s student newspaper, The Quindecim, in May. She described the prioritization process at the time as intended to be faculty led, but set in motion and ultimately decided by the college’s Board of Trustees. Duncan also told the newspaper that the prioritization process was complicated by an ongoing revision to the general education curriculum, which was passed by the faculty under the assumption that there would be steady staffing numbers.

“Faculty are incredibly excited about the new curriculum and the creativity and interdisciplinarity it allows,” Duncan said. “We passed this curriculum with a certain sized faculty and with even the promise that we might be able to grow a little.” Now, she said, “there are a lot of positions that have not been filled and we may be losing some positions.”

Sometimes colleges make major program adjustments because they’re struggling with enrollment. But that doesn’t seem to be the case at Goucher, based on a review of recent enrollment figures. In 2008, there were 360 incoming first-year students. Last year there were 420, and this year there are expected to be 439. The college started allowing video admissions in 2014. Its admit rate was 79 percent in 2017, with 15 percent of those enrolling, according to College Navigator.

Stephanie Coldren, spokesperson for Goucher, said that this year’s incoming class will be one of the biggest ever. She described the degree track changes as part of an “ongoing, faculty-led program prioritization process to strengthen the entire academic program and support the evolving interests of our students.”

Referring to the new curriculum, Coldren said that Goucher last year launched an “innovative and highly-praised new general education curriculum and this fall we will continue that process by looking at how we can enhance some majors, reconfigure or create other majors, and gradually phase out others.”

Bob Atkins, CEO and founder of Gray Associates, a higher education strategy consulting firm, said his group was not involved in the Goucher decision (the college is not a client). But typically, he said, colleges make Goucher-style changes because costs are rising as revenues decline. “Colleges are constrained across the board by students’ ability to pay, and increasing skepticism about the value of higher education.”

The more virulent strain of skepticism that scoffs at the liberal arts and attempts to “limit the academic agenda to something vocation-oriented” is misplaced, and worse, Atkins said. But even students and parents who are committed to the ideals of higher education wonder how degrees without “obvious links to jobs” will pay off.

Regarding Goucher, Atkins said it’s important to differentiate between majors and courses offered. Majoring in drama to become an actor may not lead to more than waiting tables, he said. But taking drama courses and learning to speak in front of a crowd will benefit students in any major in their eventual careers.

Using publicly available data, Atkins said that general math at Goucher — one of the programs to be cut — led to four degree completions in 2016. That means an entire major was supporting perhaps 12 students, or very few even for a relatively small college such as Goucher.

“It’s a tough decision; I wouldn’t want to make it,” Atkins said. “But when there’s actually no program in the first place? It’s not a cut if no one’s majoring in it.”