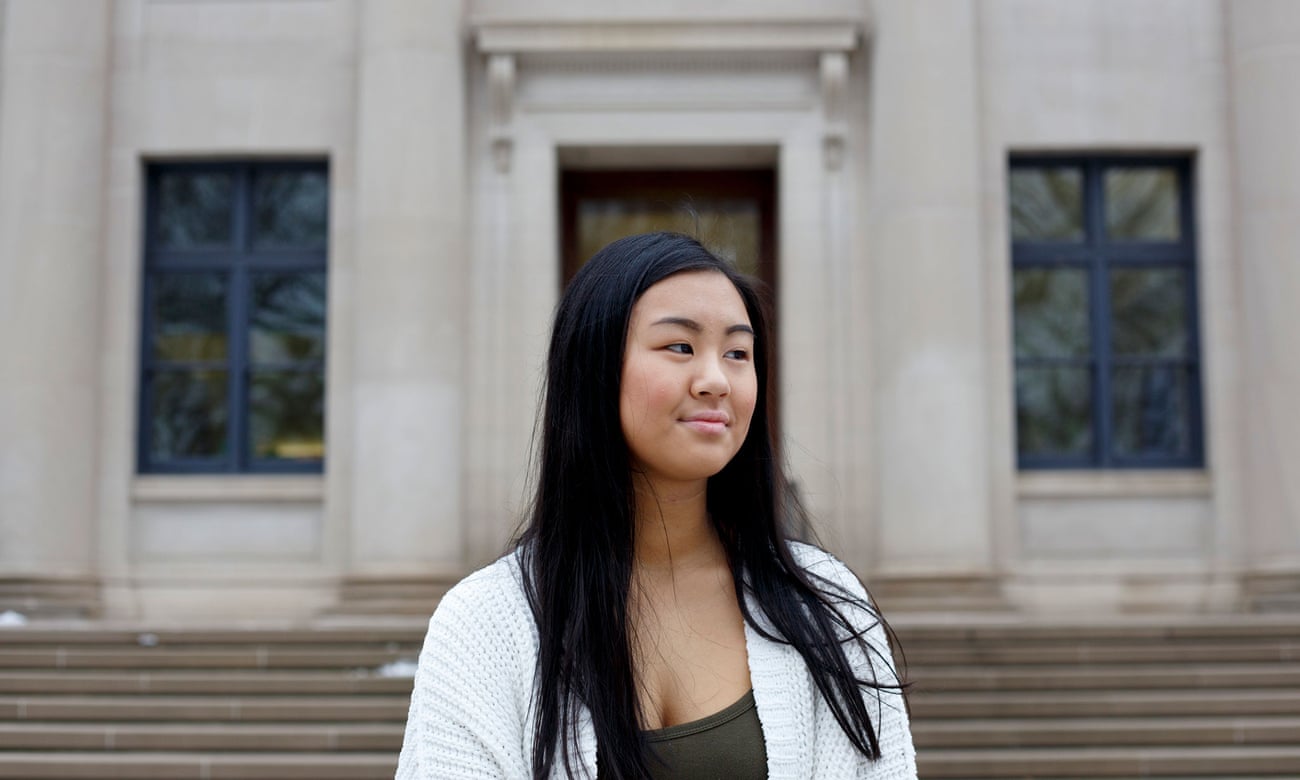 When Andrea Bian applied to college last year, she made a difficult decision: she chose not to talk about her race, fearing that it would hurt her chances of admission.

Bian is of Chinese descent, and she knew that at many US colleges, Asian-American applicants are accepted at lower rates than others with the same grades and test scores. She was ultimately admitted to Northwestern University, where she now studies journalism.

But Bian thinks there’s a bigger problem with college admissions – one “that doesn’t concern minorities at all”, she wrote in her college newspaper. “In fact, it almost exclusively applies to white people.”

She was talking about legacy preferences, a widespread and increasingly controversial factor in admission to top colleges. Many US colleges admit “legacies”, or students with a family connection to the university, at dramatically higher rates than other applicants. They are widely seen as a reliable source of alumni donations. “They do tend to be white, and they do tend to be wealthier,” Bian said in an interview. “I think that’s kind of unfair.”

At Harvard, the acceptance rate for legacy students is about 33%, compared with an overall acceptance rate of under 6%. Countless powerful Americans have followed their relatives to elite universities. In 1935, when John F Kennedy applied to Harvard, the first page of the application form asked where his father had graduated from college. “Harvard 1912,” he wrote. He was admitted, though his academic record was not especially strong. In 1964, George W Bush followed his father and grandfather to Yale, despite lackluster grades.

A recent lawsuit has unexpectedly stoked passions around the issue of legacy applicants. In October, Harvard was taken to federal district court for allegedly discriminating against Asian Americans. The lawsuit against Harvard says that the admissions office gives lower average “personal ratings” to applicants of Asian descent. According to the group that filed the lawsuit, Students for Fair Admissions, this limits the number of Asian Americans in the student body.

Though the lawsuit was meant to focus on race-conscious admissions, it has also added fuel to a fiery debate about wealth and privilege at elite institutions, and has helped to energize student demands for greater transparency in the admissions process.

Students for Fair Admissions has not historically fought for the rights of Asian Americans. It is led by the conservative activist Edward Blum, who has waged a long war against laws that involve race and ethnicity. His organization’s lawsuit against Harvard has the backing of Donald Trump’s justice department.

The issue of legacy admissions was brought up in court by Adam Mortara, a lawyer for the plaintiffs, who argued that universities should not give preferences to any category of students, whatever their racial or economic background. “Harvard steadfastly refuses to even contemplate giving up legacy and donor preferences,” he said in his opening remarks.

He asked the dean of Harvard College, Rakesh Khurana, “What is so special about wealthy people that Harvard needs to have them overrepresented by a factor of six on its campus?”

Khurana responded, “We’re not trying to mirror the socioeconomic or income distribution of the United States. What we’re trying to do is identify talent and to make it possible for people to come to Harvard,” he said. Like the website of Harvard admissions, Khurana seemed to guide the conversation away from the number of wealthy Harvard students, and toward the opportunities afforded to low-income students.

Despite the best efforts of Harvard administrators, the influence of wealthy alumni was on full display in court. At one point, lawyers shared internal emails addressed to Harvard’s director of admissions. “Once again you have done wonders,” wrote the head of Harvard’s government school, after learning that applicants connected to potential donors had been accepted. “I am simply thrilled by all the folks you were able to admit.” One donor, he added, “has already committed to a building”.

Similar practices exist at colleges across the US. Naviance, an education software company, recently gathered data on legacy applicants to 64 colleges. They estimated that on average, the admissions rate for legacies was around 31% higher than the official admissions rates for all applicants. (Naviance did not account for other variables, like the overall education level of parents, that may have given those students a boost.)

Princeton has reported that legacy applicants are admitted at roughly four times the rate of applicants overall. Notre Dame and Georgetown have announced that their legacy admissions rates are about twice their overall admissions rates. Other universities, such as the Massachusetts Institute of Technology and the University of Chicago, say that legacy status does not give applicants a meaningful boost.

Legacy preferences at US colleges are as old as the modern college admissions process. In 1922, Dartmouth College took the historic step of codifying nine criteria for admission. Number seven promised to admit “all properly qualified Sons of Dartmouth Alumni and Dartmouth College Officers”. At the time, American colleges were almost exclusively white and male. Many institutions, including Harvard, used a discriminatory quota system to limit the number of Jewish students.

Legacy preferences remain widespread, but they are less influential than they once were. Since the 1970s, when the supreme court eliminated racial quotas in college admissions, many colleges have adopted an admissions process they call “holistic review”. This approach aims to consider students in context, using a wide range of factors including academic record, test scores, extracurricular activities, race and ethnicity, and legacy status.

Dennis Weisman, an emeritus economics professor at the University of Kansas, said that legacy policies may exist in a kind of equilibrium with race-conscious admissions policies. A few years ago, he and a colleague, Dong Li, tried to model the decision-making of college admissions offices. Their model suggested that if race-conscious admissions policies were suddenly taken off the table, that could expand the influence of legacy preferences.

“A university administrator might say, ‘I have 10 more slots – and these are challenging fiscal times, so I’ll essentially sell those to alumni, and use that to fill the coffers of the university,’” Weisman said.

Bian, the Northwestern student, followed the trial closely. In her article for the Daily Northwestern, she defended colleges that consider race in the admissions process, because doing so can increase student diversity. And she acknowledged that legacy preferences might boost alumni donations but questioned whether the trade-off was worth it. “I don’t necessarily think that the benefits of legacy admissions really make it fair,” she said.

During the Harvard trial, Bian looked for statistics on legacy admissions at Northwestern. She couldn’t find any. “I just wish that universities would be more transparent,” she said. “I think that would build more trust between universities and the general public.”

Her concerns are shared by many current students. Last year, student groups at a long list of elite colleges – including Princeton, Cornell, Brown, and Columbia – organized petitions and discussions to demand transparency in admissions.

The project has had limited success. When Brown students voted in a referendum on whether the university should release legacy policies and data, 81% said that it should. Several hundred Cornell students signed a petition asking for the same information. But neither institution seems to have shared statistics.

Opposition to legacy preferences has been around for years. What seems new is that such a wide range of players now seem to share it: students of color, first-generation college students, conservative activists and even legacies themselves.

Ananda Martin-Caughey applied to Harvard about a decade ago, when she was attending a diverse public high school in Maryland, and was accepted into the class of 2013. Her father and grandfather were Harvard graduates, and she described her upbringing as upper middle class.

But after taking a sociology course on higher education, Martin-Caughey started to question the fairness of legacy policies. “There’s a lot of students for whom going to Harvard would have made a much bigger difference in their lives,” she said. “Schools like Harvard, I believe, can be a powerful force for social mobility.”

Legacy preferences appeared to influence the makeup of the student body. “It was pretty obvious to me how many of my classmates seemed to come from very wealthy, privileged backgrounds,” she said. “I thought about students I had gone to high school with, many of whom were every bit as talented as students who went to Harvard, but had fewer advantages.”

Her father, retired college professor John Caughey, used to like the idea of legacy preferences, because they seemed like a way for families to gain a sense of tradition and continuity. But as he read more about it, he changed his mind. “Universities have a responsibility to fairness and equity within the society, and that’s really more important than their responsibility to their alums,” he said.

Judge Allison D Burroughs has yet to issue a judgment on the Harvard case – but when she does, it will probably be appealed to a higher court. Martin-Caughey has reached her own verdict. “I benefited from Harvard’s legacy admissions policy, but I think it’s wrong.”

Source: How elite US schools give preference to wealthy and white ‘legacy’ applicants | US news | The Guardian