According to an annual study by the National Association of College and University Business Officers, or NACUBO, discount rates surpassed 50 percent in 2017-18 and are on course to hit 52 percent in 2018-19. The rapidly rising rates are the result of continued efforts by colleges and universities to aggressively recruit and retain more freshmen. The trend is occurring as college enrollment is declining nationally and competition for students is intensifying. 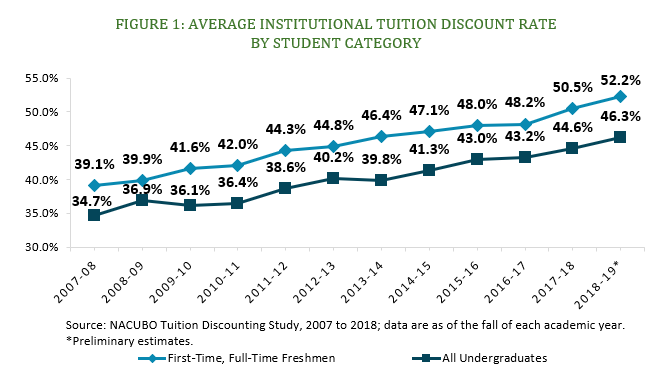 The 2018 NACUBO Tuition Discounting Study, which reports final discounting data for the 2017-18 academic year and preliminary estimates for 2018-19, found that the average tuition discount rate — “defined as institutional grant dollars as a percentage of gross tuition and fee revenue” — for first-time, full-time freshmen reached 50.5 percent in 2017-2018 and is expected to jump to 52.2 percent in 2018-19, a new record high.

“The discount rate for all undergraduates in 2018-19 is estimated at 46.3 percent, also an all-time high,” the report states.

NACUBO’s study measured tuition discount rates and other grant awards to first-time, full-time freshmen and all undergraduates enrolled at private institutions. The study results are based on survey responses from 405 private, nonprofit four-year colleges and universities that were members of NACUBO as of September 2018.

“Over the past decade, these private colleges and universities have increased their average institutional grant for first-time freshmen by 91 percent, from $10,586 in 2008-09 to $20,255 in 2018-19,” said NACUBO’s press release about the study. “This year, an estimated 89.8 percent of freshmen received financial aid from their private colleges and universities, which covered nearly 60 percent of the listed tuition and fees. More than three-quarters was awarded as need-based aid or was merit-based aid that helped meet demonstrated financial need.”

Although public institutions also award institutional grants, the NACUBO study focuses on private colleges and universities because they award larger amounts of aid to a larger portion of undergraduates.

Ken Redd, senior director of research and policy analysis at NACUBO, said the report findings were “a mixed bag.”

“In terms of what it means for students who are in private colleges and universities or contemplating entering private colleges or universities, it’s good news,” he said. “It shows that colleges are really trying to provide financial aid for their students. We’re getting close to 50 percent of students being given aid in the form of grants and scholarships.”

The not-so-good news is concerning, however. Even as discount rates are rising quickly, net tuition revenue, the money colleges receive to support their operations, is declining or stagnant.

“This gives us pause,” Redd said. “What that means is that a number of institutions are trying new strategies, whether they’re related to price freezes or reductions, or focusing on new recruitment and retention strategies, as opposed to just increasing financial aid.”

He said it’s too early to tell if those alternative strategies are working or will work over time. “In our survey, we asked them to talk about new strategies of the past fiscal year,” he explained.

Kent John Chabotar, president emeritus and professor of political science at Guilford College in North Carolina and a founding partner at MPK&D Partners, which specializes in higher education finance, is working with three other institutions to help them develop new strategies and establish targets to stabilize or increase tuition revenue by focusing on such things as class size, faculty-to-student ratios, and staff-to-student ratios.

“Benchmarking is the goal,” he said, “The main source of revenue is tuition — if it’s going down, you have to cut costs. And in every case, that means cutting staff, which is hard to do. Overstaffing is a major reason for deficits and when you have deficits it’s harder and harder to let the net tuition drop.”

Chabotar, a former chief  financial officer at Bowdoin College in Maine, likened the increasing pace of tuition discounting to “a race to the bottom.”

Higher ed institutions must “change the business model to become more efficient,” by having larger class sizes, for example, or adding to teaching and staff workloads, or finding partners to either merge with or combine programs in order to spread overhead costs between two or even three colleges.

“I think we’re going to see more of that,” he said.

Redd said in the NACUBO press release that students’ and parents’ understanding of the concept of net price “is more important now than ever.”

“Recent polls show that many Americans consider higher education unaffordable, but the private institutions that participate in our survey are providing substantial financial aid to most of their students, year after year, which significantly reduces the actual price students and their families have to pay and may put a college education in reach.”

William Hall, president and founder of Applied Policy Research Inc., an enrollment and pricing advising firm, predicted the study would stimulate useful discussions about net price and how higher ed institutions structure their business and delivery of services.

“This study suggested that any number of institutions have developed efficiencies that have allowed them to survive in a buyers’ market defined by too few bodies and too many seats,” he said.

He said he advises colleges wanting those results to focus not on trying to escape discounting, but on doing it in a disciplined way.

“You will have pricing power in circumstances when there’s a balance of supply and demand,” he said. “If we’re going to fill our classrooms, we have to price it right, and the price to pay attention to is the net price. More targeted net pricing for various people. The discounts have to be focused, and the focus obviously must address the issue of need.

“Our typical strategy is moderate rates of tuition inflation and then moderate increases in discounting. You will still make money per student,” he said. “The secret is to find a balance that doesn’t give it all away. You have to be efficient in what you do. You can’t lose money and stay in business for a long time.”

Hall spent seven hours discussing this very issue in a meeting with administrators at a college in the Great Plains yesterday. He declined to identify the college but said it is neither affluent nor particularly selective and is typical of other colleges “troubled by the national trend of diminished tuition revenue.”

He said the discount rates of many of these colleges exceeded 50 percent at the height of the recession in 2009 and now average 60 percent.