First in Saudi Arabia: Spokeswoman for Ministry of education 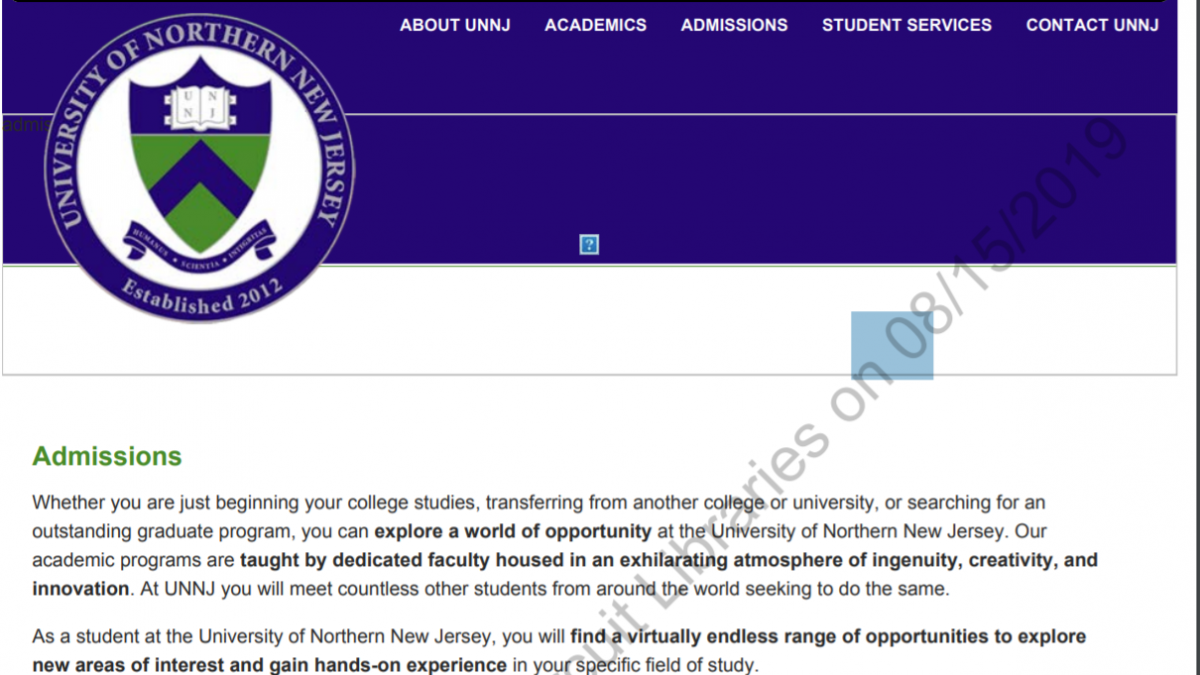 Their immigration statuses were canceled for enrolling in a fake college that the government set up to nab alleged visa fraudsters. Now they’ve won the right to challenge the blanket finding that they were willing participants in the fraud.

A federal appeals court on Thursday gave new life to a legal challenge filed by a group of foreign nationals whose immigration statuses were terminated due to their enrollment in a sham university established by the federal government in a sting operation to snare alleged visa fraudsters.

The case involves the “University of Northern New Jersey,” a fake institution created by the Department of Homeland Security that had the outer trappings of a real university — including approval from two federally recognized accrediting bodies (both wiling partners in the scheme) — but offered no classes and had no faculty.

The fake university was created in September of 2013 by federal agents. In April 2016, the U.S. Attorney’s Office for New Jersey revealed the sting operation and charged 21 education agents, recruiters and employers with conspiring with more than 1,000 foreign nationals to fraudulently maintain their status on student visas and gain work authorization by enrolling in the “pay-to-stay” fake college.

The “students” enrolled in UNNJ were not criminally charged, but the government terminated their student status due to what the Homeland Security Department described as their “fraudulent enrollment” in UNNJ. A group of the students subsequently sued.

The case was dismissed by a lower court because it concluded that there was no final government action for which a court could offer relief. But the U.S. Court of Appeals for the Third Circuit issued a ruling on Thursday overturning the dismissal and remanding it back to the federal district court for further proceedings.

The opinion of the appellate court largely centers around the legal question of whether the decision to terminate the immigration statuses of the students was final and thus eligible for judicial review under the Administrative Procedures Act.

The government argued that the decision was not final because students had the right to file for reinstatement of their student status and to challenge an adverse reinstatement decision before an immigration judge in deportation proceedings. The appellate court disagreed with that interpretation, ruling that the termination did in fact constitute a final agency action that can be reviewed by the courts.

The opinion by the three-judge panel does not make a definitive judgment on whether the government acted appropriately in terminating the students’ statuses, but it discusses at length how the government changed its own position in regard to whether the individuals who enrolled at UNNJ were victims of fraud or perpetrators of it.

According to the opinion, the government maintained in Sept. 25 oral arguments that the students “were caught up in it in the sense that they were victim by the academic recruiters” and thus “were the victims of fraud.”

But in a subsequent letter to the court, the government clarified that it was not conceding “that all — or even most –UNNJ enrollees were innocent victims.”

The Department of Justice did not comment on the appellate court ruling on Friday. Justice officials have previously maintained that UNNJ’s students were “willing participants in the scheme.”

“There was no school,” Matthew Reilly, a spokesman for the U.S. Attorney’s Office for the District of New Jersey, told Inside Higher Ed in 2016. “There were no classes, there were no books, there were no tests.”

“This was an operation that was set up to get visas for people,” Reilly said.

But the students who filed the case argued that the government violated their due process rights by denying them individualized hearings to determine whether they knowingly committed visa fraud — a finding that can block them from receiving future immigration benefits.

The original complaint, filed in November 2016, asserts that students were lured into enrolling in UNNJ by the promises that they could lawfully continue working without immediately attending classes. International students on F-1 visas can obtain work authorization through one of two programs, optional practical training (OPT) or curricular practical training (CPT), both of which are governed by specific rules and regulations.

“Brokers principally targeted for enrollment in UNNJ noncitizens in F-1 status who had graduated from undergraduate or graduate programs at a U.S. university and worked lawfully for U.S. companies through OPT,” the complaint states. “Together, the brokers and UNNJ ensnared these students with promises that they could continue lawfully working in the U.S. through CPT without any immediate need to attend classes at UNNJ. Some students were told that they could not enroll in classes because they were full; others that the school would soon offer classes online.”

“The thrust of the lawsuit was simply to say that you can’t set up a phony university and then turn around and claim that everyone who attended committed fraud,” said Ira J. Kurban, a lawyer representing the UNNJ enrollees. “Some of them were victims. They were victims of the agents; they were victims of ICE [an acronym for U.S. Immigration and Customs Enforcement]. They created a university that in every single respect looked like a university.”

The appellate court’s opinion states that “for all outward appearances, UNNJ looked like a real university. It was accredited by the State of New Jersey, DHS listed UNNJ on its website of approved institutions. UNNJ maintained a detailed website and active social media accounts. The website outlined admissions criteria, explained the academic programs that the school offered (including seven undergraduate majors and nine graduate programs), and assured students that various support systems including tutoring sessions and advisory services were available.”

Indeed, the judges added in a footnote, “the only thing lacking appears to be reference to UNNJ’s men’s or women’s basketball team in the Final Four of the National Collegiate Athletic Association’s basketball tournament.”

UNNJ is not the only sham university the government has established to catch alleged visa fraudsters. In January, the U.S. Attorney’s Office for the Eastern District of Michigan announced charges against eight individuals accused of conspiring to help foreign nationals illegally remain in the U.S. and work by recruiting them to the University of Farmington, a sham school in the Detroit metropolitan area staffed by undercover federal agents in the UNNJ model.

Source: Foreign nationals whose visas were canceled for enrolling in sham college win right to sue