Four in 10 international students turned away by Canadian immigration 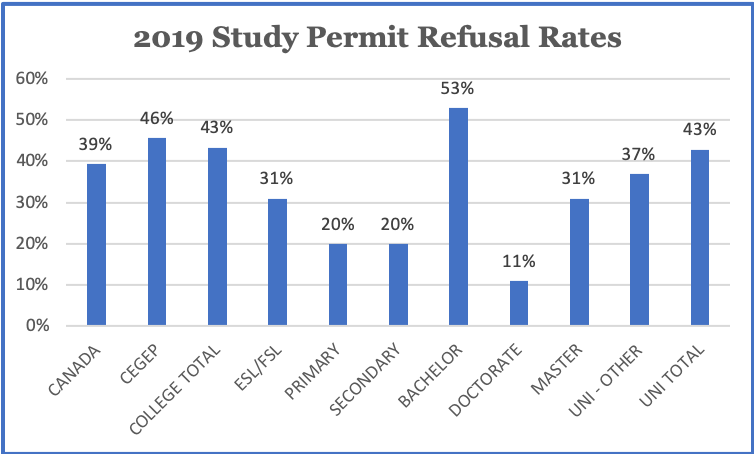 More than half the international students headed to undergraduate programs in Canada were turned away this winter and spring by immigration officials.

Between January and May, officers rejected 53 per cent of the study permit applications filed by foreign students hoping to begin a bachelor program in Canada, according to data provided by Immigration, Refugees and Citizenship Canada.

The record refusal rate is part of a trend that has seen immigration officials refuse a higher proportion of applications every year as international demand for Canadian education has soared. The overall refusal rate – including study permit applications to attend primary, secondary, post-secondary and language programs – was 39 per cent in the first five months of the year. (Rates for the first five months of 2019 may not reflect full-year rates.)

Twenty-eight per cent of all study permit applications were rejected by immigration officials in 2014. Four years later, in 2018, the overall rejection rate had climbed to 34 per cent. Demand for education boomed in that same period, with total applications almost doubling to more than 340,000 in 2018. 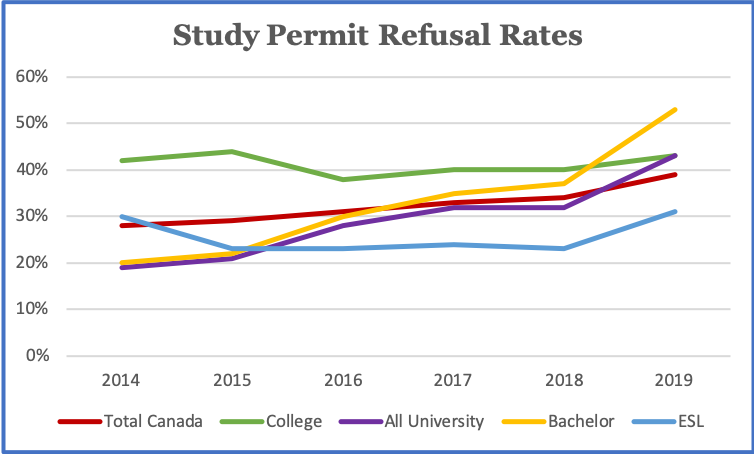 Robert Summerby-Murray is president of Saint Mary’s University, where 34 per cent of all students come from outside Canada. He is also chair of the Canadian Bureau for International Education, which promotes international education on behalf of more than 100 Canadian colleges, universities, schools and institutions.

He said study permit approvals have been improving for his students and he hasn’t heard of problems from other institutions.

“In some markets now, approvals are over 90 per cent,” he said of the experience of his own university this year. “We don’t see a 40 per cent refusal rate. That’s not our experience at all.”

Harpreet Kochhar, assistant deputy minister of immigration, warned last fall that fraud had become a significant problem in study permit applications. He told a conference of the Canadian Bureau of International Education that a sample audit found that 10 per cent of the admission letters attached to study permit applications were false. In one case, he said, a supposed admission letter from Dalhousie University did not even spell the name of the university correctly.

Refusal rates also vary dramatically by country, with students from Africa much less likely to receive a permit than students from many Asian and European countries.

Alain Roy, vice president of international partnerships with Colleges and Institutes Canada, said he is pleased that the rejection rate for college-bound students has remained steady despite a huge increase in the number of applications.

Summerby-Murray said his university works hard to build and maintain relationships with the consular officials who decide whether a student permit is approved, and they also work with expert agents who vet students thoroughly before an application is filed.

“We visit. We call,” he said. “I can pick up the phone. I can talk to the consuls in Shanghai, the team in Beijing, the folks in Hong Kong, Nairobi and other places and say, ‘Heh, we have these refusals, can you reconsider?’ We have worked very hard on these relationships.”

Polestar collected impressions from several other university administrators across Canada, all of whom shared information on the condition that neither they nor their institutions would be named. Two smaller universities said they have noticed an increase in problems with study permit approvals and two larger institutions said they had not seen any increase.

International students who want to attend school in Canada must be admitted to a designated learning institution before they apply for a study permit from Immigration, Refugees and Citizenship Canada. Most students will also need either a temporary resident visa or an electronic travel authorization to enter Canada.

All figures and charts in this story are based on data provided to Polestar Research by Immigration, Refugees and Citizenship Canada. To receive copies of the IRCC raw data files, email admin@studentimmigration.ca and ask for the study permit data package published in September, 2019.