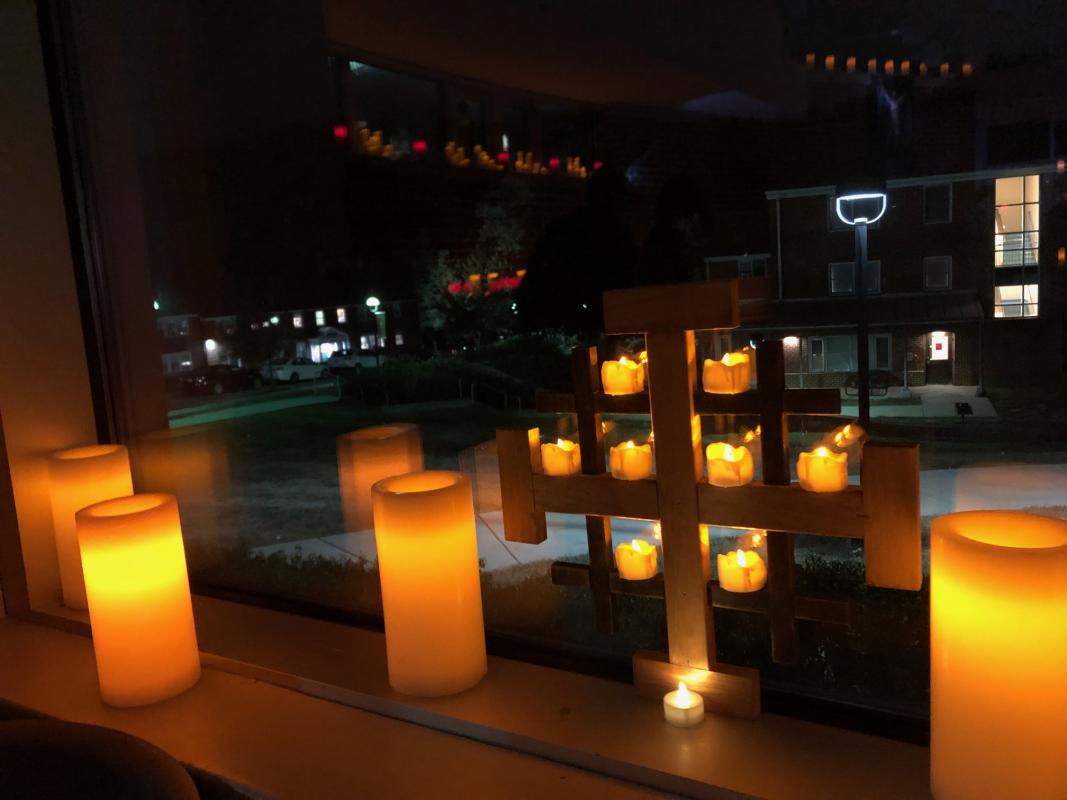 BALTIMORE — It’s 10 p.m. on a Sunday, and many college students are likely completing assignments, posting essays to discussion boards or otherwise preparing for classes the next day.

On most campuses, it’s a time for winding down after busy weekends and for getting ready for the Monday morning wind-up. But at Loyola University Maryland, 10 p.m. is a bewitching and beloved hour when a large number of students head to a popular nighttime Mass held in a residence hall lounge on the campus of the Jesuit institution.

Some 100 students piled into the lounge last Sunday and sat in every available chair or on the floor to hear Father Joseph Rossi lead the service. Classic rock blared as they greeted each other and talked about their weekend activities while waiting for the Mass to begin.

Hundreds of red, orange and yellow plastic LED-powered candles and an altar at the front of the room were essentially all that turned the lounge into a church. But for many students, the Mass is a more essential part of their lives than an actual church.

The Hopkins Court Mass, as it is officially called, is named after the freshman dorm where it is held. It was started 15 years ago when a group of freshmen knocked on Father Rossi’s door one Sunday night when he was living as a faculty resident in a student dorm The students asked if they could have a late Mass on Sunday nights. 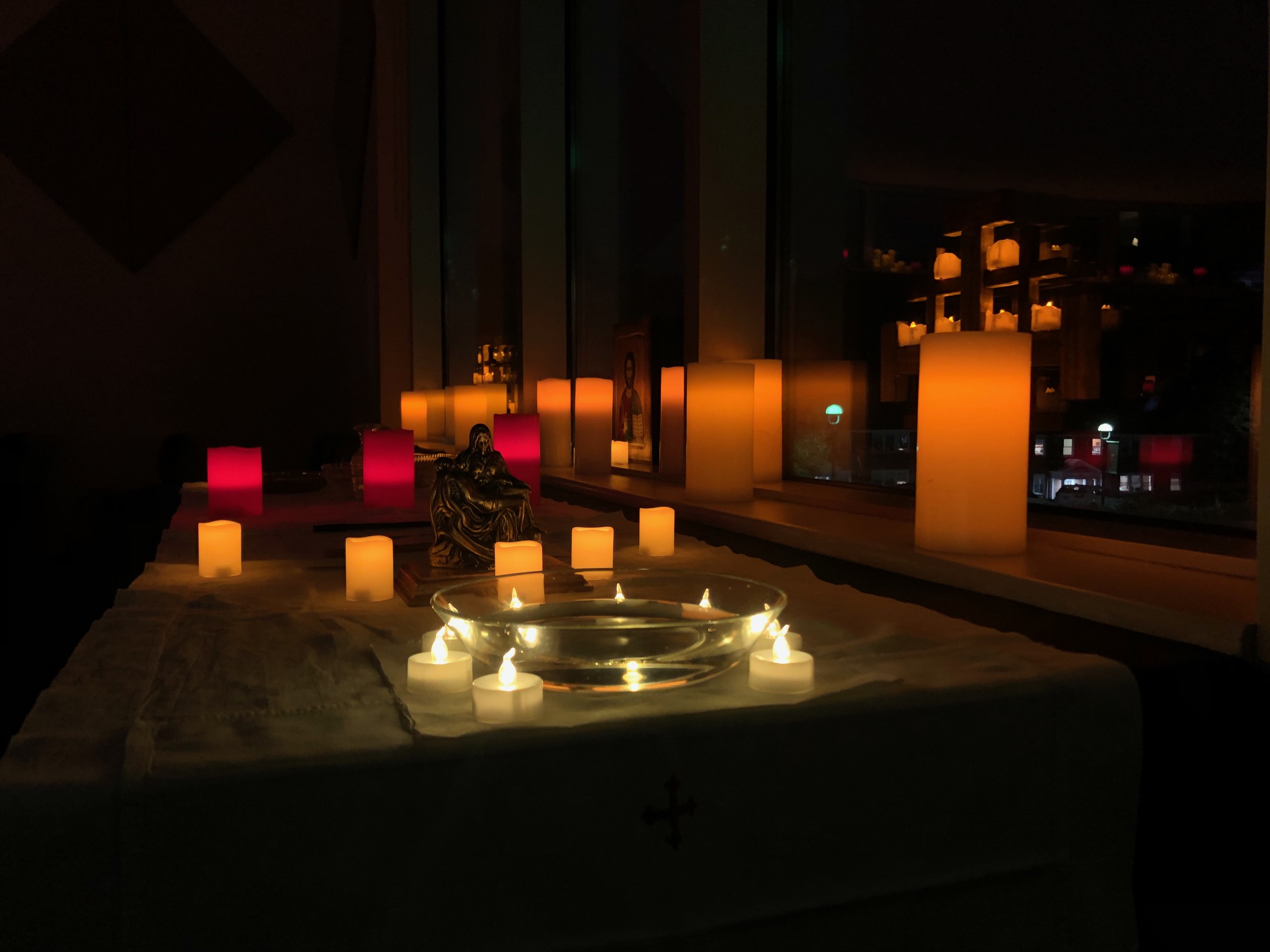 The professor of church history and theology invited the students into his living room and held his first simple coffee table Mass. This soon grew to a once-a-month event in his apartment. Demand grew, and the service expanded the following year.

The group eventually outgrew Father Rossi’s small apartment. He moved the Mass to a lounge in Hopkins Court, a residence hall just across the courtyard from his apartment, and a tradition was born.

“Many young people today have been alienated in some way from the Mass,” Father Rossi said. “I don’t think they’re rejecting some of the core teachings of the church, but the Mass just doesn’t reflect the world in which they live.”

The Sunday Mass is helping to address this estrangement between young Catholics and the church by providing students a place to come together in fellowship and a way to address the modern-day issues with which they may be grappling in a larger spiritual context.

“I do think there is a disconnect between the traditional Catholic church and our generation,” said Julia Scapp, a junior at Loyola. “I think that Father Rossi does a great job of tying it back to things that are important to us, and that we know of and care about.”

Scapp first heard the music and smelled the incense used at the Sunday service when she lived in the Hopkins dorm, but she didn’t start attending the Mass until after she’d joined a group of friends who went one night during her freshman year. She continued going ever since and is now a member of the student team helping coordinate publicity and social media for the Mass.

“It centers me for the start of my week,” Scapp said of why she keeps returning.

“The idea of having masses later on Sunday evening has been true at Catholic universities for a long time,” said Reverend Dennis Holtschneider, president and CEO of the Association of Catholic Colleges and Universities.

Students have nicknamed the phenomenon “last-chance Mass,” and they find them popular because it allows students to sleep in on Sunday morning and complete their homework during the day, said Holtschneider.

Dorm-based masses at universities with priests in residence are more common than some might think. Institutions such as the University of Notre Dame in Indiana also hold them.

“The heart of Mass is to bring people together, to form a community together,” said Father Holtschneider. If the extra trappings, such as the pop music, YouTube videos and televisions shows on which the message of each hourlong service is based attracts students, then it is worth it, he said. 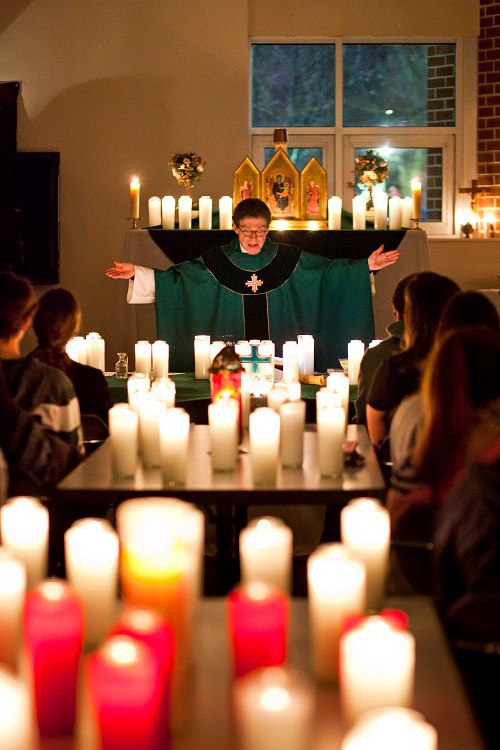 “I’m the only old person at the Mass,” Father Rossi said with a laugh. The students often introduce him to the contemporary music he uses at each service.

During the Oct. 6 Mass, music by the alternative band Imagine Dragons was heavily featured, as was as music by artists Lukas Graham and Avicii. Avicii’s song “SOS” was played as the parting “pump-up song” toward the end of the Mass, and the influence of its release after the artist’s death by suicide was explained by a student.

Father Rossi has found that much contemporary Catholic music was written by older generations and is now outdated. He takes pride in finding religious and spiritual symbolism and lyrics in modern music.

“We do everything a traditional Mass would do, but at the same time we do very contemporary music, the music that the kids listen to,” he said.

“As an administrator, I know the power of having something that comes from the students,” said Sara Scalzo, the director of student engagement at Loyola University Maryland. “When something gets brought up the chain from students, it is more likely to gather that following, because they know what it is that they need and they want.”

Scalzo has seen the Mass become more popular over the past five years as it has become more student focused. She attributes this to the feeling students have of the Mass being accessible to them.

“You’ve also got a Jesuit who wants to be very in touch with students in that way,” said Scalzo. “A freshman who walks into that Mass one time is likely going to walk out feeling Father Rossi is her friend just because of the way he speaks to students.”

Students who regularly attend the Mass build a sense of community that Scalzo said she doesn’t see as much at other events.

Matthew Boland, a senior, said he was drawn to the Mass for that very reason. Everything about the service felt relevant and in the moment.

“It exceeded every expectation that I had, and I began going every week after that,” he said. “What makes it so special and what connects it to students in such a way is that it takes contemporary themes or modern pop culture events and it brings it into context with the gospel.”

He recalled a Mass where the theme of the homily was the story of Harambe, a gorilla at the Cincinnati Zoo that was euthanized after he dragged around a child who had fallen in his enclosure. The viral video of the gorilla and child and the subsequent killing of the gorillas sparked widespread outrage. 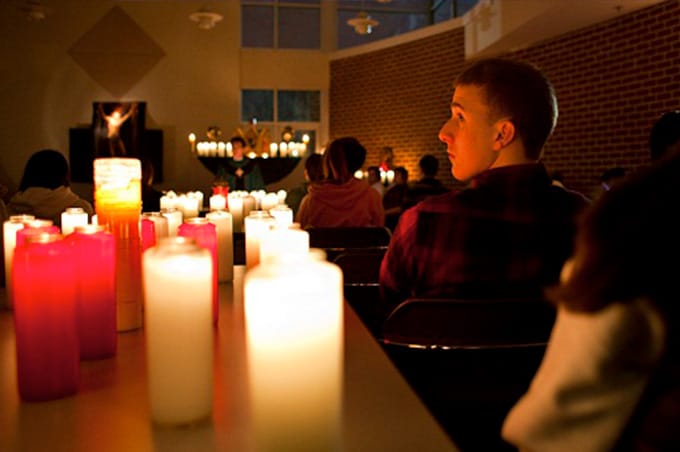 Although Father Rossi leads the Mass, about 20 student volunteers, including Boland, dedicate up to 25 hours per month to help organize it in a way that reflects students’ lives, experiences and concerns. They help select music, create promotional materials and set up the room for Mass — all with the goal of creating a welcoming place for students to unwind and practice their faith before the week commences.

“When the students see this Mass, in a sense they not only see the Catholic Mass that they are used to at their home parishes or wherever they may come from, but they see a Mass that somehow speaks to them because we’re doing the music that they listen to,” Father Rossi said.

He believes the Sunday night service offers students a contemporary analogy to the gospel.

“I think that’s what hits home for them, because they’re not used to seeing that in their parishes,” he said. “There are many young people who feel very apathetic about religion and possibly going to Mass on Sunday. I think it’s because the church needs to have an instrument to present the Mass in a way that speaks to this age.”

Many students who attend the Sunday night Mass said they don’t go to Mass when they’re home during school breaks and holidays. They said they prefer the intimacy of the Mass on campus and the emphasis on modern music.

“This is something that they want to do. They’re coming to an environment that is both spiritual and religious and at the same time contemporary,” said Father Rossi. “I think that mix is just a very attractive mix for a lot of kids.”

“A lot of Catholics right now are torn with all that has happened in the church, especially around child protection,” Father Holtschneider said. But Catholics can feel upset with the church at large and still find value in the community through the parishes they feel comfortable in and know. Similarly, students can find the liturgy at their university’s Mass more compelling than the masses at their home parishes because of the setting, relevance and being around people their own age, he added.

Students who don’t attend Mass when they are at home see the Hopkins Mass as the highlight of their week, Father Rossi said. They tell him that their peers at other institutions are surprised to hear this.

This Mass could be a way for the church to attract younger members with whom they may have lost touch, said Father Rossi. Other church organizers hope this will pull young adults back into the fold, and they are implementing similar contemporary practices at masses at other parishes across the country.

“It’s so sad that the church is losing many of the people — who I don’t think are rejecting religion or the spiritual — but in fact they just would like something traditional presented to them in a contemporary way. Now that’s paradoxical, but at the same time, I think that can be done, and I think the Hopkins Mass proves that can be done,” Father Rossi said.

Both Boland and Scapp grew up going to Catholic churches. Boland said the Sunday night Mass has made him closer to his faith.

As the Mass has grown and attracted more people, the group has started thinking about a new, larger home for the gathering. Father Rossi is hesitant to move into the larger, more traditional Loyola Alumni Memorial Chapel on campus and lose that feeling of intimacy and informality.

“We take what looks like a very ordinary, blank space that is Hopkins Lounge and really turn it into a sacred space,” he said. “It would be hard to duplicate the intimate atmosphere.”

As students began to file out of the Oct. 6 Mass, Father Rossi offered words of encouragement for upcoming midterms and referred back to the Avicii song that had played earlier, reminding students to be more than part-time lovers of Christ — to be full-time lovers in Christ.