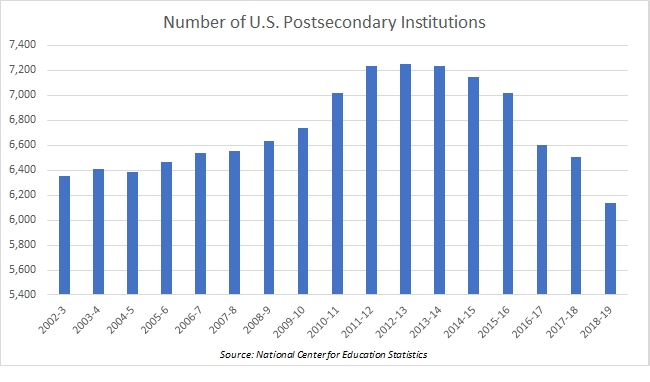 Number of U.S. colleges and universities that award federal financial aid fell by 5.6 percent in 2018-19, to lowest mark in two decades.

Higher education enrollments have been falling for years, a well-documented outcome that can be attributed to some combination of a strong U.S. economy, changes in birth rates and, perhaps, growing doubts about the value of a college degree.

Another decline is also unfolding — this one attributable to a mix of economic and political forces: the number of colleges and universities in the United States is at its lowest ebb since at least 1998.

Data released by the U.S. Education Department’s National Center for Education Statistics Friday included statistics on a range of topics, including total head count of enrolled students through 2017-18 and the number of colleges and universities in the most recent academic year, 2018-19.

The enrollment data confirm what most college officials who’ve been paying attention already know: that the number of people enrolled in U.S. colleges has tumbled since the recession, dropping from a total head-count peak of 29.5 million in 2010-11 to 26.4 million in 2017-18.

The overall decline of more than 10 percent has been fueled by drops of 47 percent and 23 percent in total head-count enrollments in for-profit and community colleges in that seven-year period, and despite increases in enrollment at public four-year colleges (12.2 percent) and four-year private nonprofit colleges (5.2 percent) during that time.

Those enrollment trends have been fairly well documented, both by federal data and those reported regularly by the National Student Clearinghouse.

As seen both in the chart below and the table at bottom, different sectors of higher education have experienced very different patterns over the last decade — some better understood than others.