Coronavirus may cost US $4.5B because of international student decline: NAFSA | Fox Business 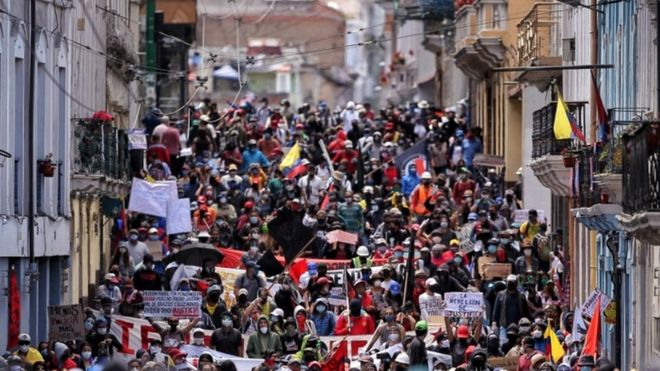 Thousands of people have taken to the streets in Ecuador to protest against the government’s economic response to the coronavirus outbreak.

Around 2,000 people demonstrated in the capital Quito, defying restrictions aimed at combatting the virus.

Last week, the president announced measures including the closure of some state-owned companies and cuts to public sector salaries.

Ecuador has been one of the worst-affected countries in South America.

Around 37,000 cases have been confirmed and more than 2,000 people have died with the virus, according to Johns Hopkins University.

According to Mr Moreno, 150,000 jobs have been lost as a result of coronavirus.

Protests were also held in the second city of Guayaquil, where authorities were last month so overwhelmed by the outbreak that hundreds of bodies remained unburied.

“If the coronavirus doesn’t kill us, the government will,” the leader of a trade union in the city told Reuters news agency.

The mayor of Quito, Jorge Yundo Machado, called for “good sense” on Twitter. “Let’s look for different ways to protest, but not in person,” he said, adding that there was a “high risk of contagion, we are in a health emergency”.

Interior Minister María Paula Romo told reporters that an estimated 4,000 people had taken part in demonstrations nationwide, and that one policeman had been injured.

Last week, the World Health Organization (WHO) described South America as a “new epicentre of the disease”.

Brazil, which has recorded more than 23,000 deaths, has the second-highest number of confirmed infections in the world. Ecuador’s neighbour Peru, meanwhile, has more than 120,000 cases.