UK: most EU students would not pay international fees – survey 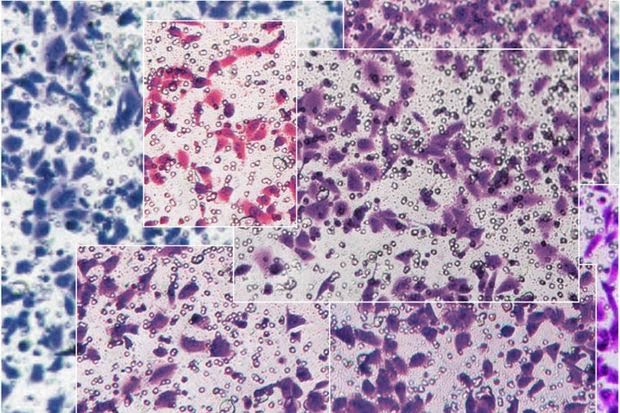 HONG KONG—Internationally peer-reviewed journals published more than 100 scientific research papers from China-based authors that appear to have reused identical sets of images, raising questions about the proliferation of problematic science as institutions fast-track research during the coronavirus pandemic.

The cache of 121 papers, credited to researchers from hospitals and medical universities across roughly 50 cities in China, all shared at least one image with another—a sign that many were likely produced by the same company or “paper mill,” said Elisabeth Bik, a California-based microbiologist and image-analysis expert who identified the trove.

Though the reports were published by different authors over a four-year period, many included identical snapshots of cell colonies—sometimes rotated or cropped to appear unique—despite focusing on different research topics. Phrases in figure captions were also repeated verbatim across the collection of reports.

Still, the apparently fraudulent research made it past the scientific peer-review process at six international journals, with the European Review for Medical and Pharmacological Sciences alone publishing 113 of the 121 papers.

One of the questionable reports was subsequently cited by other researchers more than 50 times since 2017, according to Google Scholar, while three others received more than 20 citations—suggesting the impact that the problematic papers could have on other research.

Such paper mill productions are “polluting the scientific body of work,” said Dr. Bik, a former researcher at the Stanford School of Medicine who quit her job at a medical startup last year to investigate research misconduct full-time. “I’m worried they might be the tip of the iceberg.”

Reached for comment, the European Review for Medical and Pharmacological Sciences said it would contact the authors in question and ask them to prove the originality of their data.

Three journals that had each published one paper Dr. Bik identified as problematic said they were looking into the situation, such as the Journal of Cancer. “It is alarming how adept paper mills have become,” said Richard Reece at Portland Press, the publisher of Bioscience Reports, one of the three journals. Elsevier, publisher of Biomedicine & Pharmacotherapy, said it was investing “considerable resources” into new systems to bolster fraud detection.

The Journal of the Balkan Union of Oncology couldn’t be reached for comment. Oncology Letters didn’t respond to requests for comment.

It is possible some of the papers’ authors are victims of plagiarism whose work was copied by paper mills. At least 15 of the 121 researchers The Wall Street Journal contacted responded by asking for more information to check their paper and clear their names. Some said they would produce the raw data.

Though plagiarized and fraudulent research has long been a scourge for the global scientific community, gaps in the publication fact-checking process have become painfully apparent during the coronavirus pandemic, as scientists rush to share potentially lifesaving discoveries. In June, the Lancet, a prestigious British medical journal, retracted a study after dozens of scientists questioned the authenticity of its data.

Before the study was retracted, however, its claim that antimalarials not only offered no benefit to Covid-19 patients but increased their risk of heart problems and death sparked world-wide concern—even prompting the World Health Organization to temporarily pause enrolling patients in hydroxychloroquine trials.

The race to understand the new virus, which has killed more than half a million people world-wide, has prompted scientists to publish on preprint servers rather than go through the more meticulous but time-consuming peer-review process. While that has accelerated data sharing, it is also raising concerns about inaccurate or prematurely released findings.

“Science builds upon science,” said Dr. Bik, who is based near San Francisco. “It’s sort of this brick wall that builds upon each other. If one of those bricks is not good, that means that the whole wall could collapse.”

In February, a group of researchers including Dr. Bik described more than 400 papers with suspiciously similar images that were linked to authors in China, where doctors and researchers are often under pressure to produce peer-reviewed work to advance their careers or win cash rewards.

Last year, a medical university in China’s southwestern province of Yunnan offered as much as $42,000 for papers published in high-impact journals, according to Wall Street Journal research.

“Sometimes, the purpose of research evaluation in China is not to promote the research but [to] differentiate people,” said Fei Shu, a senior researcher at Hangzhou Dianzi University. In 2017, Dr. Shu and other researchers found that Chinese universities offered between $30 and $165,000 for papers included in the Web of Science, a subscription-based index of peer-reviewed journals that he said has become the gold standard for tenure assessment in China.

These incentive systems are ripe for exploitation by paper mills, experts say, especially when those who are expected to produce published papers aren’t typically involved in research, such as clinical physicians.

Services for outsourcing research reports can be found on Alibaba Group Holding Ltd.’s e-commerce platform Taobao, including end-to-end packages that choose the research topic and publish the finished product. Chinese state media found prices for such services can range from about $4,200 to $28,000.

Paper mills selling to Chinese researchers go beyond the life sciences, according to a report last month by two anonymous researchers who have collaborated with Dr. Bik on investigations. Journals published mathematics papers with fictional non-Chinese co-authors, the report claimed, though some have since been retracted.

“China is the extreme version of ‘publish or perish,’ ” said Ivan Oransky, co-founder of Retraction Watch, which tracks published academic studies that have later been withdrawn. Though China stands out, it isn’t alone, Mr. Oransky added, citing a 2017 report that found cash bonus systems around the world, including in the U.S., Saudi Arabia and Malaysia.

But in China, those who don’t know how to conduct research are heavily incentivized to anyway, he said, adding, “That’s a recipe for disaster.”

Change could be coming. In February, the Chinese government issued guidelines warning universities against overusing publication-linked indicators, such as citations in scientific studies, to evaluate researchers.

Addressing problematic papers already circulating in the scientific community will prove more difficult. In general, the process of retracting faulty articles is more time-consuming than the original round of vetting, sometimes taking years—if a journal decides to act at all. Though Mr. Oransky estimates the annual tally of retractions world-wide has increased to about 1,500 from roughly 40 two decades ago, there are far fewer retractions than are likely needed, he said. A 2018 report by Science and Retraction Watch found the overall rate of retractions has slowed while the number of published papers has risen dramatically.

“The system is geared to publish, not to clean up,” said Jennifer Byrne, an oncology professor at the University of Sydney who has identified fraudulent papers in her field.

“Nobody’s going to be promoted at a university because they’ve been a fantastic peer reviewer,” she said. “You’re judged on your original contributions to the literature, so we’re all programmed to produce.”

—Xiao Xiao contributed to this article.