Now Schweitzer is watching as the university’s campus is taken over by the Taliban, and she fears for the many students left behind. And she has good reason to fear: In August 2016, Taliban gunmen assaulted the university killing at least a dozen students and staff. 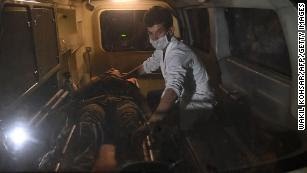 An injured Afghan man being treated in an ambulance near the site of an attack by the Taliban that targeted the American University of Afghanistan in Kabul on August 24, 2016.

During the past two weeks Schweitzer says both the Taliban and the US government in different ways hindered the evacuation effort. (Disclosure: In May, I took part in a planning meeting with Schweitzer and other leaders of the American University of Afghanistan in which they discussed what to do if the Taliban did take over).https://cd53d0745956fd4bc9490dfbcb7f418a.safeframe.googlesyndication.com/safeframe/1-0-38/html/container.html?n=0

The following discussion took place on Monday and has been edited for clarity and length.

SCHWEITZER: Our evacuation efforts have not been as successful as we wanted, primarily because of several logistical and policy constraints, not to mention the volume of people we needed to evacuate in the middle of one of the largest airlifts in history. We did the best we could under the circumstances. We had a total of 4,000 people that we needed to get out of Afghanistan. We started by prioritizing our students and, obviously, our expats, which we were able to get out. But we’ve only been able to get about 50 students out and then we have another, 50 to 75 students who were able to escape on their own.

BERGEN: On Sunday, a large group of your students tried to leave from Kabul airport but couldn’t. What happened?

SCHWEITZER: We had a sophisticated method of communicating with the whole American University of Afghanistan community. We knew how to reach them via email or phone, and we were prepared at any moment if we received any positive indication that we could move them in large numbers.

On Sunday we contacted our students. There were 200-and-some-odd people on buses going to the Kabul airport. They were picked up at various locations around Kabul. They were not in a safe house. But we found out at about the same time that the American University of Afghanistan was not considered a priority by the US government, and we didn’t fit the qualifications, evidently, of being at risk.

I understand totally that American citizens, green card holders, and those who helped the US military should be prioritized. However, our university people are very much at risk, yet we failed to be in that category according to the US government. We have had to depend on private assistance and on the Qatar government over the past two weeks to get our students out. Now I don’t know what we do next.

BERGEN: Why were your students not considered to be at-risk?

SCHWEITZER: That’s the question I’ve been asking now because the US government has been our major funder over the last 15 years, along with private donations. We have instilled in these students all the basic tenets of an American education: critical thinking, transparency, freedom of speech, tolerance. Our students love America because they knew that the United States was giving them this opportunity to get a world-class education.Why Biden’s views on the Afghan terror attack make no sense

Our university has the highest percentage of Fulbright Scholars of any university in the world — 11% of our graduates. There are many recent Fulbright awardees who are now in hiding in Afghanistan and can’t get to their university destinations throughout the US, which is a tragedy.

What happens when you have an extraordinary world-class university in a country such as Afghanistan is that students and families are extremely proud. So, the students are well known in their neighborhoods and villages. Now they are in a serious risk category. I had one student in Kabul tell me that fully armed Taliban fighters banged on her door, saying they would kill her if they could find her. Many of our students have burned their IDs and destroyed any association with the university — the university that they were very, very proud of.

Even though the US government has funded 70% of the university, very little assistance has been received since the Taliban takeover. USAID has helped us put all 4,000 of our AUAF family on the P1 Visa list, but we have not been prioritized on the “high risk” list. The lack of any system to get people through the gates at the Kabul airport and the fact that the Taliban have been in control has been a major deterrent.

Our difficulty wasn’t finding planes; there were plenty of planes. Our difficulty was getting through the Taliban checkpoints. Gates at the airport would close intermittently, and there were masses of people surrounding the airport. We had to evaluate the situation always with balancing the safety of our people against the possibility of success; success defined always as getting everyone safely through the gates into the military section of the airport.https://cd53d0745956fd4bc9490dfbcb7f418a.safeframe.googlesyndication.com/safeframe/1-0-38/html/container.html?n=0

When it came to our Afghan students, the Taliban manning the gates at the airport would make the decisions as to who would be allowed in. Often our students would be forced to wait, with no explanation, knowing full well that their future depended upon the decision of the Taliban. Can you imagine being so close and then depending on a Taliban operative to make the decision — a decision of possibly life or death.

BERGEN: You have roughly 3,900 students, alumni and Afghan staff who are still stuck. What does the future look like for them? Some have P1 or P2 visas for the United States?

SCHWEITZER: They are listed as being qualified for those visas.

BERGEN: What does that mean in practice?

SCHWEITZER: That means that they need to be in another country where the visa process will start to take place, and they might be there for a year to two years until they’re granted these visas. Our goal is to get them to one of our focal points, such as Qatar, and other locations where we can keep our students together so that they can maintain a sense of community. They need each other. They have lost everything but their determination to get an education.

BERGEN: But how do they get out now the airport effectively closed?

SCHWEITZER: That’s a good question. Now that the US military are officially out of the country, our hope is that humanitarian efforts will increase. It is extremely hard to tell our university family to just sit tight and wait. Their lives are at risk, as are their families. This is a disaster.

BERGEN: Have the Taliban taken over your campus?

SCHWEITZER: Yes. We have pictures of the Taliban in front of the faculty housing where they had spray-painted messages that we are the enemy — that we were the infidels. We had to burn hard drives and anything that would divulge any information about our students.

BERGEN: How are you feeling about it?

SCHWEITZER: There have been several dark moments through the past two weeks. To see this glorious campus, truly one that looked like any small college campus in the US — full of green space, a soccer field, a basketball court (built for the girls’ basketball team) –now occupied by the Taliban, that was the moment I truly lost my optimism. But all I had to do was think of the courage of our young men and women and my determination once again took over.

People often don’t talk about what America has accomplished in Afghanistan over the last 20 years. Education is at the top of the list. We have an entire generation of young people who have never lived under the Taliban. Our university has empowered both men and women. We’ve given them voices. Now it could be their death because of it. It is imperative that we stand by this incredible investment. This investment in dollars is relatively insignificant — but the investment in empowering Afghan young women and men is priceless.

I visited in Doha a few days ago with seven female students who we were able to evacuate with the help of the Qatar Foundation. It’s amazing, their courage — their courage from Day 1 just to come to the American University of Afghanistan, a co-ed institution with an American-style education. These seven are typical of all students who have left Afghanistan, left their families with little else than a backpack a passport, and some dust from the soil of Afghanistan. But their families said, “You need to pursue your education. It’s not safe for you here, and we support you leaving. Come back and save us.”

Each of these students was anxious to get back to their studies, and they found great camaraderie in being together. It really was just an amazing experience to be with them and see their courage. They left everything behind. And Americans must not leave the others behind.