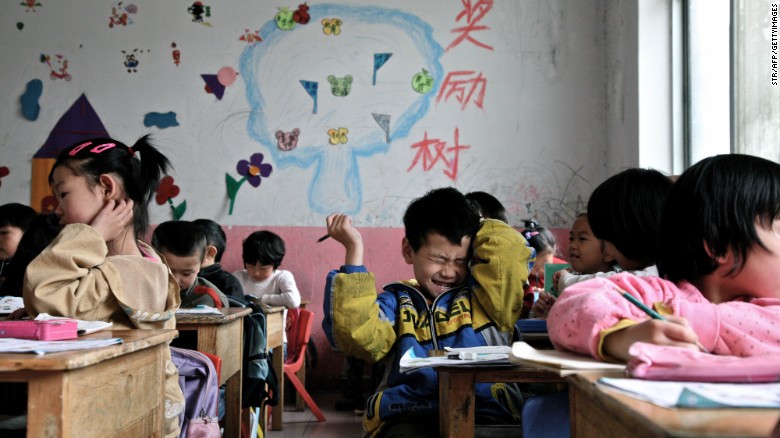 So her parents paid three consultants $4,500 to fill out the application, write her personal essay and compose teacher recommendation letters.

They also arranged her visa and communicated with her prospective colleges — eight ranked between 40 and 100 on the U.S. News & World Report College rankings.

“It would have been too much hassle if I had applied myself,” says Zhang, which is not her real name.

In August, she’ll start her undergraduate career with an open major at a Midwestern university, in the United States. She says she’s unaware that her application could be considered fraudulent and even get her expelled.

READ: Chinese students found cheating to get into U.S. colleges

With the promise of English-language fluency, a U.S. college education is increasingly attractive for many students and employers. And as Chinese incomes grow, more affordable for parents.

Using agents or consultancies to apply to college has been a common practice since U.S. universities and colleges started recruiting in China extensively about eight years ago.

In many cases, they offer much-needed help and advice to Chinese students and their parents, who know little about navigating the complexities of U.S. college admissions, says Yu Huiming, a freelance educational consultant.

In China, admission is based on a single test — many are baffled by the need for extra curricular activities, and Yu says that most Chinese high-school teachers are unable to write letters of recommendation in English.

READ: China’s entrance exams: Would you pass the test?

“For average high school students, if their parents have no knowledge of college application, they do need help from a third party,” he says.

The Institute of International Education says Chinese students now make up almost one in three international students on American campuses.

But there are growing concerns that these agencies — many unregulated — are going much further than extending a helping hand.

Eddie West, the director of international initiatives at the National Association for College Admission Counseling (NACAC), says higher education-related fraud is a “significant concern” for many admission officers.

“It’s a huge problem. Understanding the true scope of the activity is inherently difficult because it’s clandestine,” he says — though he notes the fraud isn’t limited to China.

New Oriental Vision Overseas Consulting, one of the best-known education agencies in China and the one used by Zhang, says on its website that students must write their own personal essays.

But Zhang insists this was never mentioned during her conversations with three of its consultants, who promised to return her money if she hadn’t gotten into any of the schools.

“I did feel slightly guilty but all my friends did the same thing,” she says.

New Oriental Vision, which is registered with China’s Ministry of Education, initially agreed to an interview with CNN but later canceled, saying no-one was available to talk.

Marc, a native English speaker living in Beijing, was a black market writer of phony applications, helping dozens of young Chinese students like Zhang get into U.S. colleges.

For a year, he wrote personal essays based on a set of questions and answers provided by an education agent he never met in person. He said he was paid $100 for each 1,000-word essay, and has written more than 40.

Marc, not his real name, gave up working as a sub-contractor when he no longer needed the extra cash.

“You never feel right doing it, I knew from the beginning that it was bad,” he says.

The Beijing Overseas Study Service Association (BOSSA), which was founded to “support excellence and professional standards” among study abroad advisers, says it’s aware of the problem of faked applications.

But, he said “you can’t go in to every consulting office and investigate what services they are providing.”

There are more than 400 educational consulting firms certified by the Ministry of Education in China, while thousands of others are unlicensed, according to BOSSA.

An informal survey of half a dozen students by CNN found that their parents paid $3,000 to $40,000 to agents that promise to get their children into universities and colleges overseas.

The University of Southern California, which had more than 4,000 Chinese students enrolled in the 2014 academic year, says the concerns about falsified applications from China are “very real.”

Timothy Brunold, the university’s Dean of Admission, says Chinese students need to understand that anyone promising admission to a specific American university is not offering a legitimate service.

“They are attempting to game our system and subvert our attempts to select students who present the best fit for our institution.”

Brunold says the university uses various methods to gauge the “veracity and authenticity of student-submitted essays” and any prospective student found to have cheated would be banned from admission, while current students would usually be expelled.

He says fraudulent applications are identified “all the time” and not just from applicants from China.

During the financial crisis at the end of the last decade, enrollments at U.S. public schools declined.

Mostly from China’s rapidly expanding middle class, they can afford to pay full tuition, say experts. In 2013, Chinese students contributed an estimated $8 billion to the U.S. economy, according to the Institute of International Education.

While Blumenthal understands why Chinese families turn to agents, she says they aren’t necessary.

Free information on U.S. colleges and universities is available on EducationUSA, an official resource web site funded by the U.S. Department of State that provides students with the right information they need to apply.

Some students who have used China’s questionable admissions agencies to land a college place, struggle once they set foot on campus.

Andrew Hang Chen, the Chief Development officer of WholeRen Education, which advises on college admissions, transfers and offers academic counselling, says an estimated 8,000 students have been expelled from U.S. universities since 2013 — a small percentage of the more than 270,000 Chinese students studying in the U.S.

Some of those Chinese students have sought help from his consultancy, with the majority of those on academic probation or kicked out because of poor grades or academic dishonesty. Others have been dismissed for faking application materials or getting caught having a better English speaker take the TOEFL test which measures English-language proficiency.

“We want Chinese parents and students to know that it’s a big issue that a lot of Chinese students don’t succeed academically in the U.S.” Chen says.

“You can’t just have the agencies make them look good or even fake documentation before sending them abroad. They need a lot of guidance.”

As she prepares for college life in the U.S., Jessica Zhang says she’s both anxious and excited.

She’s recently heard that she will face an additional English-language test on arrival on campus.

If she fails any of the four parts, she’ll have to take extra languages classes, delaying her graduation.

“I’m afraid the test will show my true colors,” she says.