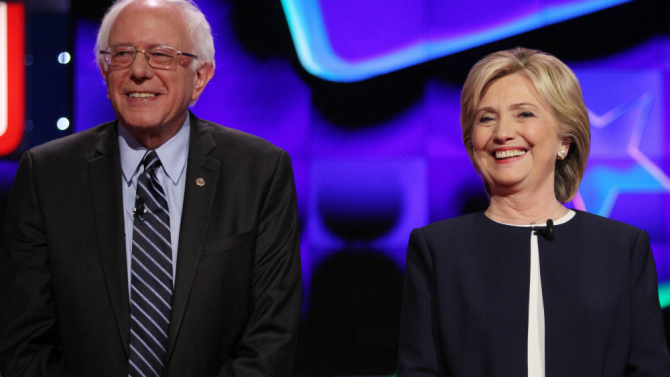 After spending much of the primary campaign sparring over Sanders’s proposal to make public colleges and universities free, Clinton in July revised her own plan to make four-year public institutions free to students with family incomes up to $125,000 by 2021. Clinton’s proposal, Sanders said, “tells us that if you are a low-income family, a working-class family, if your kid works hard and studies well — regardless of the income of your family — your kid will be able to make it into college. That is a big deal.”

The Democrats appeared at a campaign event at the University of New Hampshire. The state of New Hampshire ranks second over all for the average debt of graduates of four-year colleges and universities.

Clinton said her plan would also address the challenges of borrowers repaying student loans by allowing them to refinance their debt at lower rates. She specifically identified high student loan interest rates as a major obstacle for recent college graduates looking to start a business or take other risks. She also used the event to point voters toward the college cost calculator released by her campaign earlier this month. “We are trying to make it as specific as possible, because I don’t want anybody to miss out on what this plan can do for you,” she said.

Sanders said the Senate’s Health, Education, Labor and Pensions Committee, of which he is a member, would pass Clinton’s tuition-free college plan. “I will work with President Clinton to make sure that this legislation is passed as quickly as we possibly can,” he said. “And to make that happen we need your help.”