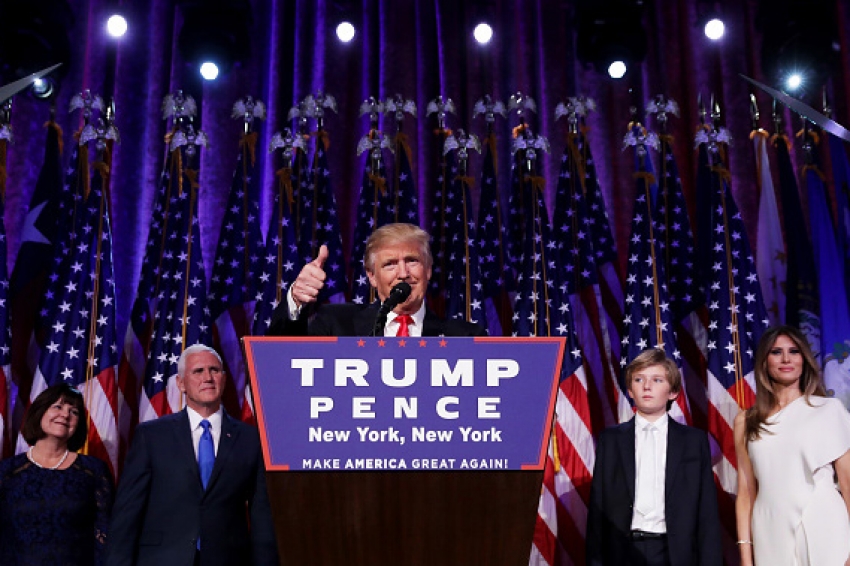 NEW YORK – The American people, in a historic call for change, elected Donald J. Trump to become the 45th president of the United States on Tuesday, sending shock waves around the world and a divisive and disruptive leader into the nation’s most powerful office.Trump, riding a wave of populist anger and a recent pledge to “drain the swamp” in the nation’s capital, defied almost all predictions and polls and stunned the political establishments of both parties with a powerful repudiation of the status quo.Trump, speaking shortly before 3 a.m., said Democrat Hillary Clinton called him to offer her congratulations.

He told the crowd, “We owe her a major debt of gratitude for her service to our country.”“For those who have chosen not to support me in the past — of which there were a few people — I’m reaching out to you,” he said. “It is time for us to come together as one united people. It’s time.”

Trump is riding into Washington with Republicans holding control of the House and the Senate, buoyed by Trump’s unexpected victory.

House Speaker Paul Ryan, who had criticized Trump during his campaign, called the GOP nominee’s victory a ‘‘repudiation of the status quo of failed liberal progressive policies.’’

Trump overcame a dogged and determined Hillary Clinton campaign that painted him as unstable and unqualified for the presidency. His chances seemed to be ruined several times during his campaign because of disclosures about lewd comments about women, accusations that he groped women, criticism of a Hispanic federal judge hearing a civil case against Trump University, and attacks on the Muslim parents of a slain war hero.

But his win showed the strength of deeply disgruntled voters, voters who were willing to take a risk on an untested political leader whom they disliked rather than an experienced one they also disliked. Along with tremendous political baggage, Trump heads to the White House as the first president in modern history with no political or military background.

Hillary Clinton, attempting to make history as the first female president, was dogged by questions of her untrustworthiness and failed to rally enough Hispanics, blacks, and college-educated voters. Questions are bound to turn toward FBI director James Comey, who in the final 11 days of the race stoked controversy around her use of a private e-mail server as secretary of state, helping to erode what was once a comfortable lead in the polls.

Clinton — who famously ended her 2008 presidential bid with concession speech that alluded to the “highest, hardest glass ceiling” she was unable to shatter — was hoping to mark the historic night two miles away from Trump at the Jacob K. Javits Convention Center, in an atrium filled with glass panes.

“Everyone should head home, get some sleep, and we’ll have more to say tomorrow,’’ Clinton campaign chairman John Podesta told the stunned crowd there at 2 a.m. Wednesday. He said the campaign wanted to be sure all the votes were counted.

Trump’s win also marks a rebuke to the two-term tenure of President Obama, who campaigned relentlessly for Clinton in an attempt to preserve his eight-year legacy and his signature health care law. Trump has pledged to go about dismantling many of Obama’s legislative accomplishments, but will face a Democratic Party that will likely unite to oppose his every move.

Clinton had been vying to become the first woman to be elected president in the country’s 240-year history, hoping strong backing from superstar Democrats and entertainers would help make up for the lack of enthusiasm for her.

Heading into Tuesday night, Trump needed to run the table to win, facing seemingly insurmountable odds. As the results rolled in, he racked up wins in Florida, North Carolina, Pennsylvania, and Ohio — strongly challenging the Clinton campaign with its larger staff, more money, and a more united party.

Clinton was stunned further by results acoss the Rust Belt and the upper Midwest, especially in Pennsylvania, which was called for Trump at 1:43 am Wednesday, and Wisconsin and Michigan, two states that were considered to be the Democratic firewall and which the party has carried in every election since 1992.

Clinton narrowly won Virginia, the state where Democratic vice presidential nominee Tim Kaine has served as governor and now as US senator.

The uncertainty of the election results — and the possibility that Trump could become president — sent Dow futures plunging by more than 700 points.

Trump and his supporters were gathered at the Hilton Hotel in Midtown Manhattan, cheering the results as they played on television screens. Supporters yelled “President Trump, President Trump” at his election party, electrified by the upset.

Sanitation trucks filled with sand lined 6th Avenue in front of the hotel, guarding against attack at the site where Trump was set to speak Tuesday night. Outside, a small crowd of supporters grew boisterous as returns piled up favoring the New York businessman, who lives a few blocks away in a tower bearing his name.

Exhilarated supporters chanted campaign slogans at passing cars — “Drain the swamp!” “Lock her up!” — and sparred with crowds outside the barricades that penned in the demonstration.

Citing a variety of domestic and foreign policy issues — abortion, immigration, more muscular foreign policy — the mostly young, diverse group of supporters here expressed a broad enthusiasm for a presidency that they said would be more in line with the America they envisioned inheriting: Powerful, brazen and unbowed on the world stage.

“Everyone is pumped about Trump,” said Angel Mercedes, a 23-year-old from the Bronx who said he was nervous wearing his Make America Great Again hat in his neighborhood. Mercedes immigrated from the Dominican Republic and applied for citizenship, and said his path to America made him concerned about those immigrants who come illegally, and the threat they may pose. Trump alone, he said, would “make the future safe.”

Clinton’s staff was initially optimistic that she would win handily, and particularly confident about Florida. But as the night wore on, the mood among her supporters and campaign staff shifted from near jubilation to deep concern as the electoral map bled red.

Brian Fallon, Clinton’s spokesman, declined to answer questions about Florida as he walked through the campaign hall. The Clinton campaign initially sent out detailed reports about what Clinton was doing, even what her granddaughter was wearing, during the early portion of the night. As the results came in, those reports stopping coming.

Earlier, thousands of people gathered outside the Javits Center in an unseasonably warm evening to cheer Clinton, and nervously listened to vote counts announced over a loudspeaker.

“I’m biting my nails because it has come so close” said Amy Carovinci, 29, said that the election turned into a “bloodbath.”

The vibe outside was somewhat subdued, with people waving American flags at time and cheer amid a sense of calm. “Everyone has been so kind out here,” said Jennifer Sutton, 44, who came up from the Jersey Shore to watch results.

And even though the event was for supporters, Clinton still got lukewarm reviews. “It’s not the same as Obama,” said Brian Hassett, a 55-year old American living in Toronto, Canada. “Obama was like a new car coming off the boat. This year you’re buying a used car where you know all the problems.”

Clinton and Trump were the two most disliked nominees in history, and much of their campaigns were not marked by uplifting rhetoric or high-minded proposals, but in trying to convince voters that their opponent was far worse. Trump’s crowds regularly chanted, “Lock her up,” while Clinton labeled half of Trump’s voters as “deplorables” who are “irredeemable.”

Clinton ran a campaign that was centered on making education more affordable, continuing a health care plan pioneered by President Obama, and pushing for equal pay for women.

But though Clinton has been in politics for four decades, or perhaps because of her longevity in power, she struggled to distill her message into a single, uplifting rational for her candidacy. Her events were small, and dominated by middle-aged women excited about the idea of the first female president.

Her most potent speeches during the campaign centered on what Trump’s foreign policy would entail and the rise of the “alt-right” white nationalism that he stoked.

Trump was an unlikely candidate from the start. He had never before run for office, and he had foibles that would have dislodged any other candidate — having been married three times, struggling under bankruptcy, and with a long record of behavior as a playboy that during the campaign led to about a dozen women accusing him of sexual assault. At 70, he would be the oldest president to take office.

But his unconventional campaign was fueled by the angst coursing through the electorate. His plan to build a wall along the southern border became a rallying cry for his supporters, and so too did a proposal to temporarily ban Muslims from entering the United States. His opposition to free trade helped trigger a recalibration on the issue in both parties.

Throughout his rise he drew energy from the tens of thousands of people who attended his often rambling speeches, where he would lash out at members of the media, protesters, and even in one case a mosquito buzzing around him as he spoke. They had a carnival-like atmosphere, where emotions ran high and people were occasionally physically beaten.

Trump’s harsh rhetoric and style, dropping profanities into his speech and mocking a disabled reporter, drew him legions of supporters who decried what they called “political correctness” but it also prevented him from broadening his base.

Trump performed poorly in the three debates with Clinton, after he scoffed at doing any of the traditional preparation that most candidates focus on for months. He slipped to a deep deficit in the polls, with Republicans beginning to brace themselves for a blowout loss.

He eschewed the norms of modern political campaigning, building only a bare-bones operation to turn out the vote, spending little time fundraising and mostly refusing to use the poll-tested language that panders to various interest groups. The election wasn’t nearly as expensive as four years ago. Clinton raised $687 million and Trump spent $306 million, according to the Center for Responsive Politics. Four years ago Obama raised just over $1 billion, and Mitt Romney raised $992 million.

Trump was aided in the final 11 days of the race when FBI director James Comey took the extraordinary step of announcing he was reexamining Clinton’s e-mails after agents found a new cache of electronic messages on the computer of Anthony Weiner, the estranged husband of top Clinton aide Huma Abedin.

The announcement injected new life into Trump’s campaign, and reminded voters of the Clinton scandal and a sense of entitlement that critics say she would bring to the Oval Office. Only on Sunday, after agents combed through the e-mails, did Comey reveal that the FBI had not changed its conclusions on the matter. Most of the e-mails, it turned out, were duplicates of material already reviewed.