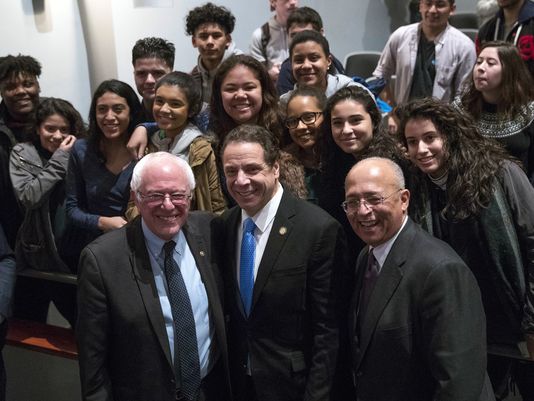 If the plan passes the Legislature, by 2020 it would cover students whose families earn $125,000 or less annually.

The free tuition plan, estimated to cost about $163 million a year, would be phased in over three years, according to Gov. Andrew Cuomo’s office. By the final year, New York students would be eligible if their families earn $125,000 or less annually.

The program, which would need legislative approval, would cover both two and four-year colleges, including community colleges. Room and board would not be free.

Tuition is currently $6,470 a year at State University of New York four-year colleges.

States with the most (and least) student debt

“If you come from any family making $125,000 or less, the state will provide free tuition,” Cuomo said Tuesday at LaGuardia Community College in New York’s Queens borough. “It is going to be the first program like it in the United States of America. It’s once again New York leading the way.”

Cuomo announced his proposal, which he called the Excelsior Scholarship program, alongside Sen. Bernie Sanders, the independent from Vermont who pushed for free tuition during his Democratic presidential bid last year.

Sanders praised the plan as “revolutionary,” saying students shouldn’t be “punished” with tens of thousands of dollars in debt for seeking higher education.

The effort is expected to supplement the variety of tuition-assistance programs that New York already offers to low-and middle-income New Yorkers to attend one of the state’s 64 public campuses.

The initiative would need approval of the state Legislature as part of the budget for the fiscal year that starts April 1. And New York, like most states, cannot operate with a budget deficit.

Legislative leaders had no immediate comment on the plan. While about two-thirds of the state House members are Democrats, fewer than 2 in 5 state senators are Democrats.

Cuomo has until Jan. 17 to introduce his budget plan.

The SUNY Board of Trustees increased tuition $300 a year between 2011 and 2015, but lawmakers rejected another increase this past year. This year, SUNY is seeking to let its 29 two- and four-year colleges raise tuition in each of the next four years by $100, $200 or $300.

Tennessee instituted its program of free tuition at community and technical colleges in the state in 2015. It provides eligible students money to pay tuition at the public colleges after proceeds from Pell grants, Hope scholarships or other state student assistance is taken into account.