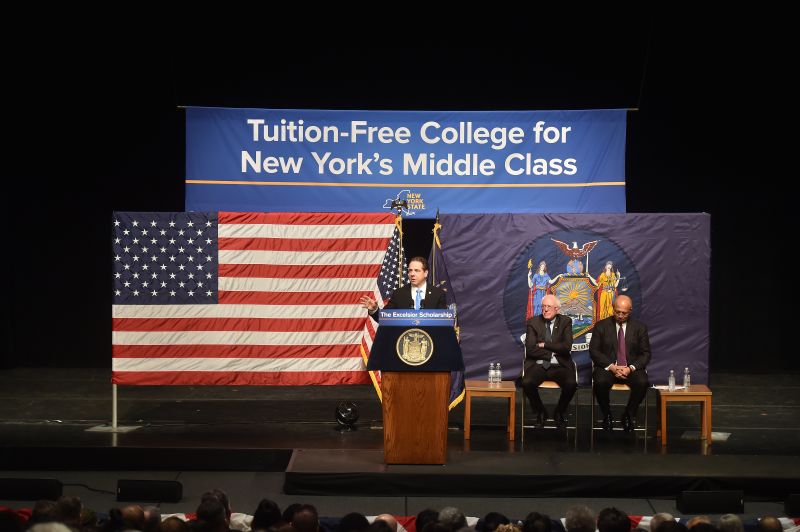 The drive for tuition-free public college experienced a rebirth Tuesday, rising from the ashes of the 2016 presidential election to re-emerge at the state level.

New York’s governor, Democrat Andrew Cuomo, delivered the latest version of the idea at LaGuardia Community College in Queens, flanked by Vermont Senator Bernie Sanders. Cuomo, already rumored as a future presidential candidate, unwrapped a proposal that in many ways looks like the plan his party’s nominee, Hillary Clinton, brought to the 2016 election — with a few differences.

Cuomo’s plan, called the Excelsior Scholarship, would ensure free tuition at New York’s public two- and four-year institutions to students whose families make up to $125,000 per year. That’s the same income threshold Clinton used for her national plan after Sanders’s strong run for the Democratic nomination pushed her to adopt a tuition-free proposal. But Cuomo called for phasing in the program more quickly than Clinton — over three years ending in 2019, instead of over four years ending in 2021.

The proposal for New York drew both praise and opposition within the state. Students and public higher education leaders backed it as supporting affordability for low- and middle-income families. But legislative Republican leadership balked at handing the bill to taxpayers. Meanwhile, the state’s private colleges and universities sounded a cautious note while awaiting more details. Many private college leaders strongly opposed the idea when it was pushed by Clinton and Sanders.

Sanders signaled a belief that New York will be the first of many states to roll out free tuition proposals. However, several national analysts remained split over whether free tuition would encourage more students to enroll and finish their degrees or whether it will amount to a regressive handout to middle-class and wealthy families who do not need it.

Cuomo’s proposal, which will need to be approved by the state’s legislators, would cover students enrolled in two-year and four-year programs at institutions in the State University of New York and the City University of New York systems. In some ways, it’s a throwback for CUNY, which was long associated with tuition-free attendance until the 1970s.

Students will need to be enrolled full time to participate, a requirement the governor’s office said would encourage on-time graduation. The governor’s office also indicated that the initiative is structured as a “last-dollar” program, paying after students receive other state and federal grants.

Cuomo’s office estimated that 80 percent of New York’s households make $125,000 or less. About 940,000 of them have eligible college-age children.

The program would cost about $163 million annually once it is fully phased in, according to estimates from the governor’s office. For comparison, New York has an existing Tuition Assistance Program for students that provides about $1 billion in grants annually. The state spent about $10.7 billion on higher education in 2016, including capital projects and personal service, according to its budget results for all governmental funds.

New York counted 573,555 full-time-equivalent students in public higher education in its 2017 budget. The average annual tuition for a bachelor’s program at SUNY institutions is $6,470, according to the governor’s office. It is $6,330 at CUNY institutions. Associate degrees at the respective institutions average $4,350 and $4,800. Cuomo made no mention Tuesday of the program covering room and board, but those costs vary widely in New York State, where some public institutions serve commuter populations, others serve residential populations, and other institutions fall in between.

When introducing his proposal, Cuomo likened the push for free college tuition to the push generations ago to have the state pay for high school attendance.

“If you want to offer everybody a fair shot, then you have to get up-to-date, and you have to say what high school was 75 years ago, college is today,” Cuomo said. “College is a mandatory step if you really want to be a success. And the way this society said, ‘We’re going to pay for high school because you need high school,’ this society should say, ‘We’re going to pay for college because you need college to be successful.’”

Many of New York’s higher education leaders offered support for the proposal. City University of New York Board of Trustees Chair William C. Thompson, a Cuomo appointee, spoke at the Tuesday announcement, saying steps are necessary to keep college in reach for everyone. SUNY’s chairman, H. Carl McCall, and chancellor, Nancy L. Zimpher, voiced support in statements focused on affordability.

The SUNY Student Assembly’s president, Marc J. Cohen, called on New York legislators to act quickly to approve Cuomo’s proposal. Barbara Bowen, the president of the Professional Staff Congress — a staff and faculty union for CUNY — called the proposal a “conceptual and political breakthrough.” Frederick E. Kowal, president of the United University Professions, a union representing SUNY faculty members, called it “the kind of positive, progressive change that UUP’s members would get behind.”

It might not be so simple, however. Matthew Chingos, a senior fellow at the Urban Institute, said the new proposal might not be as progressive as it seems, because New York’s existing aid programs cover many costs for low-income students when taken in concert with federal aid. Therefore, the state would be effectively spending more money on students from wealthier backgrounds.

“If SUNY tuition is $6,000 and change and the Pell Grant is $5,000 and change, and New York already has other need-based aid that already closes the gap, they’re basically just taking a world where tuition already is free for low-income kids and doing nothing more for those low-income kids — and instead plowing millions of dollars into children from more affluent families,” Chingos said. “The change in expenditure is regressive.”

Chingos added, however, that the idea of free college for lower-income families can be a good idea. His main issues with the proposal are setting the income cutoff at $125,000 and not providing new resources to low-income students.

“Governor Cuomo isn’t providing ‘free’ tuition, he’s simply telling New York taxpayers to write a bigger check,” Kolb said. “At the end of the day, someone has to pay the bill, and once again his political ambitions will be subsidized by the highest-taxed people in America.”

The Commission on Independent Colleges and Universities in New York released a cautious statement saying it was waiting for more details. The question at hand is what is best for each state resident and taxpayers, said Mary Beth Labate, president of the organization.

“New York policy makers have long understood the critical role that the state plays in giving all families — regardless of their financial means — a choice in higher education,” Labate said in the statement. “The state’s major higher education financial assistance programs have always been available to all qualifying students. New York State’s private, not-for-profit colleges and universities are willing and seasoned partners and have long been committed to a public/private partnership that has served students and taxpayers well.”

CICU represents the leaders of more than 100 private not-for-profit colleges and universities in New York. Such institutions provided $5.1 billion in institutional financial aid in 2014-15, it said.

The proposal could very well spell trouble for some of New York’s many small private colleges and universities. The state is already an intensely hypercompetitive market because of the large number of institutions operating there, according to Ian Mortimer, vice president for enrollment management at Nazareth College in suburban Rochester.

Nazareth is a small fish, enrolling 2,159 undergraduates and 724 graduate students in the fall of 2016. It’s in a big pond — Mortimer counts 38 baccalaureate-degree-granting institutions within a 120-mile drive of Nazareth’s campus.

But small private colleges and universities can argue that they’re in an entirely different cost market than New York’s public institutions. Nazareth students, for example, pay much more than students at public colleges. Nazareth’s advertised tuition is $31,024 for 2016-17, and its average net tuition for the class entering in the fall of 2016 notched $15,295. Compare that to average annual tuition reported in the low-to-mid-$6,000 range for SUNY and CUNY.

“I’m not entirely sure this would incrementally put more pressure on us,” Mortimer said. “It’s already apples and oranges in terms of cost.”

Mortimer voiced other concerns about the tuition-free state college program, though. New York’s public tuition rates are much lower than many other states’, he said. New York also has its Tuition Assistance Program and a two-year federal loan payment program.

Mortimer wonders if the money could be better spent on explicitly trying to improve graduation rates for those most at risk of dropping out of college, noting that degree completion generally means being better able to pay off college loans and secure employment.

“When you look at the demographics of the state, I can’t help but think that part of this is a competitive play for SUNY and CUNY,” Mortimer said. “If the governor has access to about $160 million, I do think it would be much more appropriately applied to [improving] graduation rates.”

Advocates maintain that tuition-free programs are better than an often-confusing mix of financial aid and loans. The simple idea of free tuition can be enough to encourage more students to enroll, said Morley Winograd, president of the Campaign for Free College Tuition.

“The reason you start with free college tuition, regardless of the requirements or eligibility issues that might be raised, is because the studies have shown that it drives enrollment up,” Winograd said. “Once you take the challenge of the cost of a college degree off the table, a lot more people will sign up to attend.”

Other analysts debated the proposal’s requirement that a student attend college full time. Mark Huelsman, a senior policy analyst at Demos, said he had mixed feelings.

The goal should be to promote full-time enrollment while not ignoring students who need to attend part time, he said.

“We want to take care of the financial burdens that may be preventing students from going full time,” Huelsman said. “And we want to signal that the likelihood of completing increases a lot if you attend full time.”

When Sanders talked about free tuition in Queens on Tuesday, he said other states could follow New York’s lead if it enacts the legislation. But New York is not the only state to dabble with free tuition — Tennessee and Oregon have both enacted forms of free community college programs, for example.

Still, the fact that Cuomo, the governor of the large and visible state of New York, promoted the free tuition idea in his first policy proposal of 2017 indicates the idea’s staying power — particularly as Democrats seek to regroup from their 2016 setbacks.

“This idea has legs,” Huelsman said. “It’s not going away.”