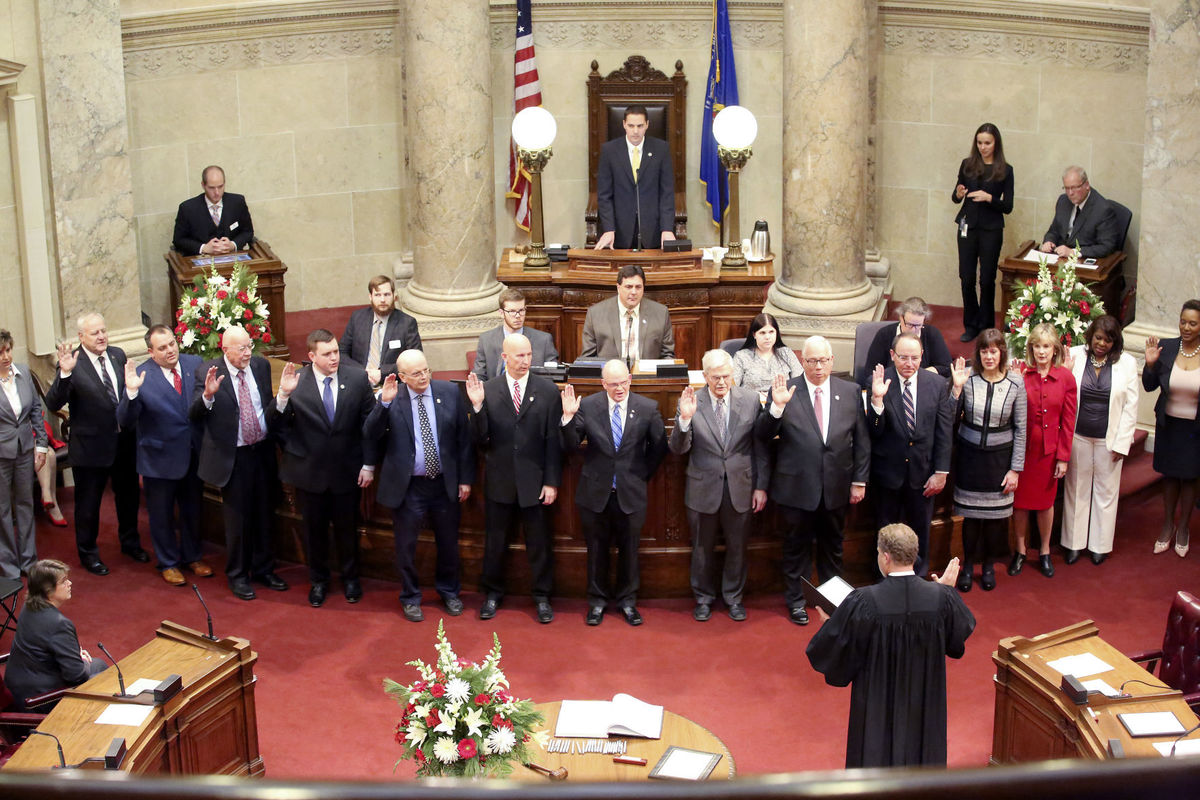 After watching their parties install historically big majorities Tuesday, Republican leaders of the state Assembly and Senate pledged to pursue an ambitious conservative agenda while also diverging on key issues for the upcoming legislative session.

Assembly Speaker Robin Vos and Senate Majority Leader Scott Fitzgerald outlined their priorities for the upcoming 2017-18 session, agreeing to consider toll roads to boost transportation funding and a breakup of the state Department of Natural Resources into smaller agencies.

But the two also were notably apart on key issues like how to fund school districts and the University of Wisconsin System for the two years starting July 1 and the possibility of medical marijuana being legalized in Wisconsin.

The GOP now controls the executive and legislative branches of state and federal government for the first time in nearly five decades, and Republicans now hold near-unprecedented majorities in the Capitol, with a 64-35 seat majority in the Assembly — the largest since 1957 — and 20-13 in the Senate — the biggest since 1971.

Assembly leaders and Fitzgerald, R-Juneau, on Tuesday were optimistic about the prospect of President-elect Donald Trump and a GOP-controlled Congress devolving government functions back to the states.

“We’re obviously excited about the prospects of more power being distributed or devolved back to the states,” said Assembly Majority Leader Jim Steineke, R-Kaukauna. “That’s something that we look forward to.”

Vos, R-Rochester, also said he plans to do a better job of ensuring broad public support exists for controversial proposals — like allowing concealed carry permit holders to bring weapons to college campuses — before the bills hit the floor.

Assembly Minority Leader Peter Barca, D-Kenosha, said the pledge was welcome news but expressed skepticism all legislation would be passed with more public support given the way Republicans have pushed significant changes through in the past.

“I think it would be fantastic,” said Barca. “If they hold true to their commitment.”

Vos’ pledge comes as the GOP has kept its control of state government for six years, during which lawmakers have passed a number of sweeping changes — notably Gov. Scott Walker’s signature law known as Act 10, which all but eliminated collective bargaining for most public employees and enacting a right-to-work law.

Barca said “if history is any guide,” Republican lawmakers are not talking about the biggest measures they will pass this session.

Vos’ pledge for more transparency and to find broad public support for legislation came when asked by reporters on Tuesday whether he supports controversial legislation that would allow concealed carry permit holders to bring weapons to college campuses.

“I think it’s incumbent upon the legislators who have an idea to spread across the state, find people to support it, get groundswells of support to bring an idea here, not just convince a bunch of people in our caucus to pass a bill without making sure the public is where we are,” said Vos on Tuesday.

Fitzgerald said GOP senators would “take a look at” campus carry legislation but was noncommittal about its odds of passage. Vos said he’s open to the idea, but that the caucus hasn’t discussed it.

Rep. Jesse Kremer, R-Kewaskum, introduced the bill last legislative session but it failed to get a hearing and drew significant opposition from college students and faculty. The Republican lawmaker has said in recent months he would like to bring the proposal back, prompting opposition on the UW-Madison campus. On Tuesday, Kremer said it was not his first priority.

“This bill itself — campus carry — isn’t something I’ve even been promoting the last few weeks,” Kremer said. “It’s something UW has been doing a great job of promoting for me.”

Kremer said if the legislation comes forward this session he will make sure he has enough support, but that members of his caucus are already discussing other bills related to the Second Amendment.

Kremer noted that the previous piece of legislation addressing concealed carry on college campuses “went through the Speaker’s office.” He said he had supporters ready to testify on the bill, but a hearing was not scheduled.

Also Tuesday, to reporters and in a speech to the Assembly, Vos said a top priority for the upcoming session is to revise the way the state funds school districts. But Fitzgerald said such an effort wouldn’t be successful.

“The age-old discussion around here has been trying to change the school aid formula,” said Fitzgerald. “But because that doesn’t seem like something that is going to happen — the reality of getting that piece of legislation through either house, I think, would be very difficult.”

Vos said because more than half of school districts are experiencing losses in enrollment, the current way the state sends schools money — on a per pupil basis — isn’t working.

He said he plans to convene a committee to look at ways to change school funding but didn’t commit to the change taking place this legislative session.

“We just need to step back and not rush into a quick solution,” said Vos.

State Superintendent Tony Evers has proposed several times to revise the state’s funding formula, also in part to address declining enrollment and school districts’ finances, but Republicans have rejected his proposal in the past. Evers said he looks forward to the work.

“It’s very difficult to make changes — fundamental changes — in the funding system during a budget and having some time to think through some good ideas is appropriate and I agree with him,” Evers said.

Get breaking news sent instantly to your inbox

Fitzgerald expressed skepticism at the odds of passing a gas-tax increase in the Senate — an option Vos has stressed should be on the table to resolve the state’s transportation-funding short- fall.

“Gas tax, I just don’t have a handle on that right now, whether or not that’s palatable,” Fitzgerald said. “I certainly have an idea that the caucus is somewhat divided on that.”

Walker has said any tax increase would need to be offset by a tax cut of equal size elsewhere in the budget.

Fitzgerald said Tuesday “that seems to be the model” for any plan to boost transportation fees and taxes in the upcoming session. He added that implementing toll roads — the subject of a recent Department of Transportation study — should be considered as a long-term option.

Vos previously indicated he would consider that option as well.

Vos also said on Tuesday that he isn’t personally opposed to legalizing medical marijuana, but that his caucus is instead focused on passing “right-to-try” legislation, which would allow people with terminal illnesses to gain access to experimental drugs and getting Senate approval for a bill that would allow parents to purchase CBD oil, a marijuana extract, to treat epileptic children with limited options for treatment.

Fitzgerald said lawmakers in the Senate may have found compromise in passing a bill allowing use of CBD oil, but also said he’s not eager to consider legalizing medical marijuana.

“I wouldn’t support it right now,” Fitzgerald said, adding that he has “no idea where (GOP senators) would be” on the issue.

Breaking up the DNR

Vos and Fitzgerald both said they are open to the idea of breaking up the DNR, spreading oversight of parks, forestry, environmental, hunting and fishing programs among three existing agencies and two new ones.

“If the idea is to make sure we have a more responsive agency in a way that does not harm the environment, I think it’s worth looking at,” Vos said.