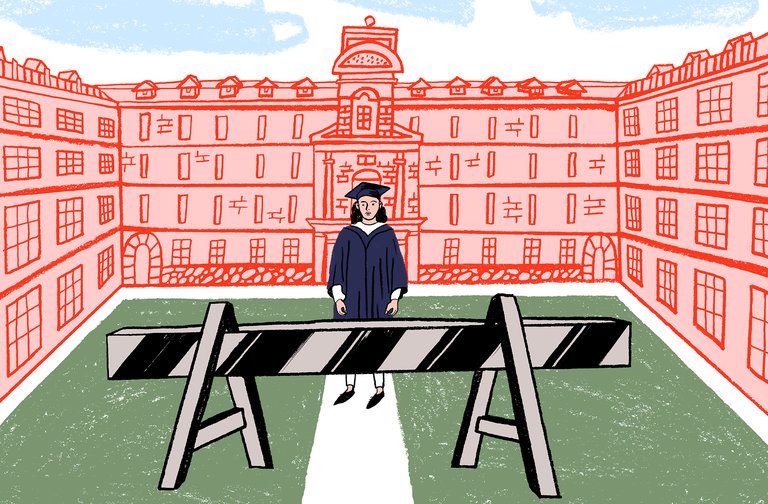 After decades of rising college costs and tepid income growth, student debt has become a drag on graduates’ hopes and a threat to economic growth.

The cost of a four-year college education, adjusted for inflation, is two and half times as much as it was in the 1978-79 school year, while median family income has increased only 20 percent.

A new report by the Federal Reserve Bank of New York documents the hardship that has resulted from the soaring level of student debt taken on to cover those costs. About one in 10 student borrowers is behind on repayments, the highest delinquency level of any type of borrowing in the Fed’s survey, including home mortgages, auto loans and credit cards.

Loan payments are keeping young people from getting on with life, delaying marriage and homeownership, other data show. Research also suggests that student debt is crowding out other investment and spending that would otherwise occur. So the fallout from these burdens, afflicting those who are supposedly best prepared to face and shape the future, is not only a personal-financial issue but also a social and economic one.

Total student debt — $1.3 trillion — is more than double what it was as recently as 2008 and is more than Americans have racked up for cars or credit cards.

But wages for college-educated workers have only recently shown gains. They rose 6.6 percent from 2014 to 2016, as the labor market improved, but that still leaves them a mere 4.5 percent above where they were in 2002.

Wage gains would have to be considerably more robust to handle rising debt burdens.

The total amount of student debt pales in comparison to mortgage debt, so it does not pose the same threat to the economy that the housing bubble caused. But it does weaken economic growth and foster inequality, a further scourge that crimps spending and investing and impedes broader prosperity. Households headed by young college-educated adults without student debt have about seven times the median net worth of those households with student debt, the Pew Research Center found.

Better administration of government repayment plans could help borrowers in the short run. But a more enduring solution is to increase wage growth by enabling white-collar and service-sector employees to bargain collectively, making more salaried workers eligible for overtime pay, ending discriminatory practices that result in pay disparities based on race and gender, and tightening up the visa system that lets companies in technology, finance and other white-collar fields use cheaper foreign labor to fill jobs or replace workers in the United States.

The alternative is a society and an economy where even many college-educated workers cannot get ahead.