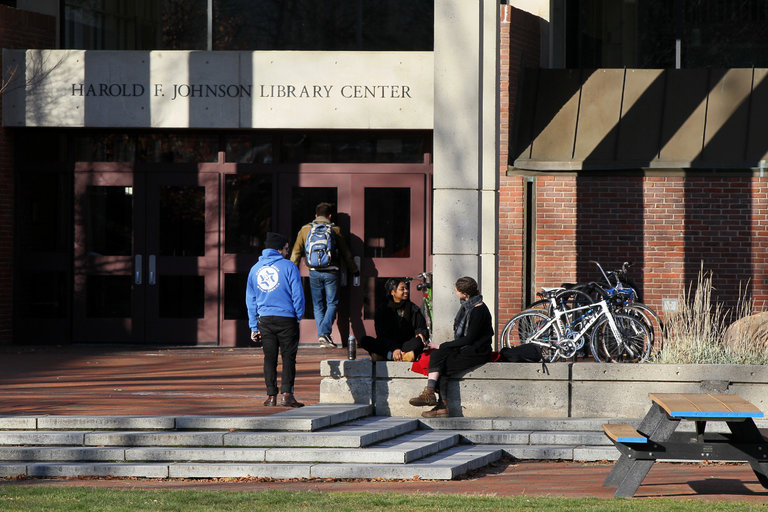 In the minds of parents and teenagers going through the college application process, May 1 is a magic date. At that point, you’ve sent in a deposit, bought a sticker for your car window and posted your choice on social media.

This year, however, scores of teenagers had something unexpected happen next: During the first week in May, they received text messages or emails from schools that had accepted them but had not heard back. The messages all hinted at a particular question: Might a larger discount prompt you to come here after all?

Hampshire College, Elizabethtown College, Washington & Jefferson College and Ursinus College, all private liberal arts schools, did this sort of outreach in recent weeks, as did Lawrence University, and perhaps others. For some students, such notes can be a dream come true if they make their first-choice college more affordable.

These invitations raise ethical questions in higher education: Schools are not supposed to dangle discounts in front of people who have committed to other institutions. Liberal arts colleges with flexible discounting policies may be tempted to skirt that line, given that families might worry about the value of their programs in the workplace. But late communications to applicants about financial aid, even without mentioning dollar amounts, can seem like flat-out poaching to the schools that have already admitted those students.

“In just trying to talk about how competitive and cutthroat this business is right now, this has brought it up to another level that I have never seen before,” said James A. Troha, the president of Juniata College in Huntingdon, Pa. “May 1, is that even the date anymore?”

The upheaval that comes with reopening the college decision is rough on teenagers as well as their parents, who would have to revisit difficult financial choices and conversations all over again. Suddenly, a first-choice school may be almost within reach but still not quite affordable.

The injection of money into a discussion thought to be over makes an emotional situation even more fraught. “Talking about the affordability piece with the student in the room, that was never done much until five years ago,” said Kristina L. Dooley, founder of Estrela Consulting in Hudson, Ohio, a group that advises clients on college decisions. Now that applicants, even in wealthier families, know how much of a stretch college might be, it can weigh them down with guilt. “I’m hearing it more and more,” Ms. Dooley said.

For a portion of the applicant pool, May 1 has not been the date for some time. Many colleges maintain wait lists. Schools may draw from that list for months after the deadline without anyone accusing them of playing dirty.

And for all the attention families devote to the most competitive institutions, plenty more have space available through summer and invite qualified students to apply. The National Association for College Admission Counseling, or Nacac, publishes a list each year, and this year’s lineup includes household names like Arizona State and Penn State.

For many families, however, there have been searching discussions about finances all through March and April. Many appeal their initial financial aid offers in the hopes of getting more grant money. Then, they spend weeks trying to figure out whether they can (or should) pay $50,000 or $150,000 or more for four years at a student’s first-choice school.

So it almost certainly comes as a confusing surprise when, for some, another round of communication begins out of the blue in early May.

Ursinus, of Collegeville, Pa., is one of the colleges making those late communications, but administrators at the school say they do not relish the prospect. “I don’t think anyone who sits in the seat that I sit in is twiddling their fingers behind the scenes like Mr. Burns from ‘The Simpsons,’ saying, ‘Ha, ha, ha, we get to do this,’” said Dave Tobias, vice president and dean for enrollment management.

Instead, some colleges get aggressive because they feel they have to. After the May 1 deadline, the number of students who have sent in deposits, multiplied by the amount of money each has agreed to pay after discounts, may not equal enough to cover the institution’s budget.

Mr. Tobias said Ursinus had hit its numbers by May 1. But it had excess capacity, and it wanted to offer seats to more students who might benefit.

In order to make such an offer, school administrators are supposed to follow Nacac’s ethics rules, which state that, generally, members must not “knowingly offer financial aid packages to students committed to attend other institutions, unless the students initiate such inquiries.”

What’s the definition of “knowingly?” All of the schools that contact students after May 1 say they do so only with those who have not definitively reported that they are attending another institution.

Still, these are teenagers, and most of them probably hadn’t gotten around to telling schools they were not coming. And the colleges have to know that most of them had put down deposits elsewhere and thus were indeed “committed,” right?

“I recognize that this is a fine line,” Mr. Tobias said. “It’s something we wrestle with regularly, and I’ll be very honest with you, I don’t think it’s anything that anybody feels good about.”

But there are practical considerations. Mr. Tobias hears often from students who did not place a deposit anywhere by May 1, and he doesn’t have any way of knowing who is who. John Courtmanche, a spokesman for Hampshire College, said in a statement that so many students did not respond to its emailed request for a decision by May 1 that it sent two text messages to them on May 2. The second one reminded them how to get in touch with the financial aid office “if they had questions about their aid package.”

Louis L. Hirsh, who has spent the past two years as chairman of Nacac’s Admission Practices Committee and is a former director of admissions at the University of Delaware, does not believe such outreach violates the letter or spirit of the Nacac rules, as long as the notes say they are only for people who have not yet committed elsewhere and do not contain specific dollar offers.

“What’s the spirit of the thing?” he asked. “The spirit is in how you best serve students, and if you’re giving a kid a chance to attend the school that has been a first choice all along, it’s very hard to see that as unethical.”

Mr. Hirsh acknowledged, however, that Nacac could not listen in on the ensuing conversations, in which students might bring up how much they were preparing to pay at a school where they had already made a commitment.

Mr. Troha, the Juniata president, also worried about the head trip these communications send teenagers on. Not only did some of the students committed to his college receive such notes this year, but so did his daughter, as he explained to The Wall Street Journal this month. (He was too much of a gentleman to name any of the schools.)

Another parent whose child received a post-May 1 overture said it added more drama to an emotional ordeal.

“It’s a roller-coaster ride, and as a parent, you just want it to be over, and May can’t get here soon enough,” said the parent, who did not want to be identified for fear that the extra money could be yanked back just as quickly as it was offered. “Then, to have this dropped on us, my heart sunk.” Her heart rose, however, when the money came through, and the family accepted the offer.

Debbie Kohl Schwartz, the founder of a service called Road2College, doesn’t think families should get particularly worked up about these developments, but she does urge them to be more realistic about the system. “These are business tactics,” she said. “Parents and kids approach it like a holier-than-thou process, but colleges approach it more like a business.”

Given that fact, one new strategy seems wise. When colleges reach out to accepted students who have not yet gotten back to them, those students probably shouldn’t say they’re not coming. If they did, after all, they would be excluded from any early May outreach and potential offers of further discounts.

As for Mr. Troha, he pledged not to take part in such dealings. “I just don’t think it’s a path that Juniata is willing to go down, to continue to throw money at families,” he said. “If it is all going to be about the bottom dollar, we are all in a world of hurt, frankly.”

Source: When Colleges Dangle Money to Lure Students Who Ignored Them – The New York Times