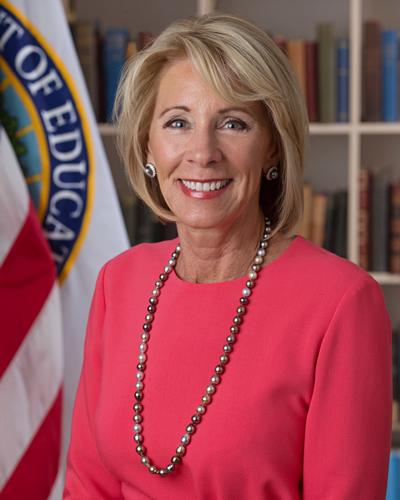 The proposed rule, which was published Thursday in the Federal Register, would also amend regulations to add a “non-exhaustive list of criteria” that would offer colleges “different methods” to demonstrate their eligibility for a religious exemption to Title IX, the federal law that prohibits discrimination based on sex. Currently, institutions “controlled by” religious organizations are eligible for exemptions from Title IX, but the department said in a press release that neither Title IX nor the regulations implementing it define what it means for a college to be controlled by a religious group.

“Our actions today will protect the constitutional rights of students, teachers, and faith-based institutions,” Secretary of Education Betsy DeVos said in a press release. “The Department’s efforts will level the playing field between religious and non-religious organizations competing for federal grants, as well as protect First Amendment freedoms on campus and the religious liberty of faith-based institutions.”

The Council for Christian Colleges and Universities praised the intent of the new rule.

“While we cannot yet comment on the entirety of the specific proposed rule, we applaud any effort on the part of the Department of Education to put policies in place that protect religious liberty and ensure that faith-based institutions are treated fairly by the federal government,” said Shirley V. Hoogstra, the group’s president.

But Michael A. Olivas, an expert on higher education law and a retired professor at the University of Houston, disputed the premise behind the proposed rule that religious institutions are being unfairly treated.

“I don’t believe that religious institutions are treated unequally in the law,” he said. “In fact, there’s any number of exemptions that religious institutions and organizations get, all of which allow them to operate in ways that public or governmental organizations don’t. There are all kinds of religious hiring exemptions: you can let someone go or not hire them because you assert a religious protection that exempts you from normal [employment] laws or nondiscrimination laws” including laws prohibiting discrimination based on sexual orientation or pregnancy.

“I think it’s just flat wrong to suggest that what we need to do is to restore a balance,” Olivas said. “If we’re out of balance, it is in the other direction.”

The proposed rule was released on National Religious Freedom Day in concert with new guidance from the Education Department regarding prayer in public K-12 schools and as part of a package of proposed rules from various agencies relating to equal treatment of faith-based groups.

Daniel Mach, the director of the American Civil Liberties Union’s Program on Freedom of Religion and Belief, described the proposed regulations as “yet another effort by the Trump administration to encourage discrimination in the name of religion.”

The proposed Education Department rule applies to a variety of grant programs administered directly by the department and indirectly through the states, but it does not apply to direct student aid programs.

Provisions of the proposed rule would:

The proposed regulation would also require public institutions to comply with the First Amendment, which guarantees free speech, as a condition of receiving grant funding. Private institutions receiving funding would have to comply with their stated institutional policies on speech. The proposed rule states that the Education Department would find an institution to be out of compliance in regards to these speech-related requirements only if there is a final, nondefault state or federal court judgment to this effect.

“To the extent that this rule requires universities to follow the First Amendment and follow their already existing requirements, it should be uncontroversial,” said Robert Shibley, executive director of the Foundation for Individual Rights in Education, which advocates for speech rights on campus.

Shibley said he is concerned about the potential that this proposed rule could create incentives for colleges to fight or settle speech-related cases to avoid Education Department sanctions.

“But over all, I’d say it’s a welcome effort to make sure that the government, when it is giving out taxpayer money, is ensuring that the institutions are following their rules and certainly following the Constitution, which they’re already obliged to do,” he said.