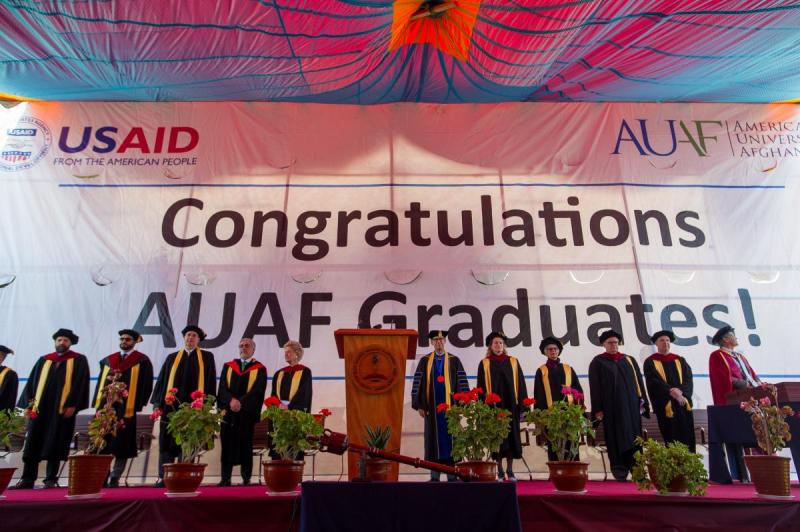 U.S. government funding for the university expires this spring, and it’s uncertain whether it will be renewed. Oversight bodies have raised concerns about the institution’s governance and fiscal controls.

The American University of Afghanistan opened its doors in 2006, in the wake of the U.S.-led invasion of the country five years earlier. In a country still marked by conflict and stark gender inequalities in educational opportunities, the private, coed, nonprofit institution stands out as an outpost for American-style education.

The​ university currently enrolls about 850 students — 42 percent of whom are women — across its undergraduate and graduate programs. It offers undergraduate degrees in law, business, political science, public administration and information technology, as well as a master’s program in business. It also offers professional development programs.​ It has more than 1,000 graduates and has produced 97 Fulbright scholars to date.

Despite such successes, the future of the university may be at stake.

AUAF is highly dependent on U.S. tax dollars, which, according to the university’s president, David Sedney, account for about 70 percent of its budget. The U.S. Agency for International Development (USAID) has contributed more than $110 million to the university since its inception, and additional funding has come from the Departments of Defense and State. It’s unclear whether USAID funding for the university will continue after the current funding term ends May 31, as was initially reported by CNN.

The uncertainty over future funding comes after officials at USAID raised serious concerns about AUAF’s governance and fiscal controls. A joint investigation by USAID’s Office of Inspector General and the Special Inspector General for Afghanistan Reconstruction (SIGAR) concluded that AUAF could not account for more than $63 million in U.S. government funds, according to SIGAR’s Oct. 30 report to Congress.

A separate SIGAR report, from April, faulted AUAF for “a history of mismanagement, lack of controls, and financial instability.” The report said that examinations of financial documents found that the “university was not sustainable in its present form, financially or programmatically, due to poor governance and management.” It also alleged failures of oversight and conflicts of interest on the part of the university’s board.

Details about the alleged conflicts of interest by university board members were not disclosed in the SIGAR report to Congress. SIGAR denied a Freedom of Information Act request by Inside Higher Ed for specific documents relating to SIGAR and USAID’s investigations of AUAF.

Sedney disputes the allegation of missing or unaccounted-for funds and described SIGAR’s characterizations of AUAF as “inaccurate and misleading.”

“Every dollar that we’ve spent from the U.S. government has been fully accounted for in our monthly, quarterly and yearly reports,” he said. “In cases where the contracts are over, we have done final reports that have been approved by the issuing agencies. All of those documents are available to SIGAR and the U.S. government.”

Sedney said U.S. government funding is necessary for the security of the university, which in August 2016 sustained an attack by the Taliban that killed 15 people. Several weeks before that attack, two AUAF professors were kidnapped. The professors — Kevin King, an American, and Timothy Weeks, an Australian — were freed from Taliban custody just this past November, after more than three years in captivity.

Sedney said the attacks on the AUAF campus and the abductions of its professors compelled the university to increase spending on security, which accounts for about $7 million out of the university’s overall $28 million budget.

“All of that security spending is paid for by the U.S. government,” Sedney said. “Unfortunately, given the security situation in Afghanistan and the very clear intent of the Taliban to continue attacking us, we have to spend that money on security. Continued U.S. government funding is vital to our continued operation, because there’s no one else besides the U.S. government that will pay for security. Various donors we’ve talked to are not in a position to pay for security, because it brings with it a range of potential legal liability issues that only a sovereign government can accept.”

A USAID spokesperson said that additional funding for AUAF past May “is subject to a competitive process and contingent upon the university’s continued compliance with the terms of the Administrative Agreement (AA) that AUAF signed with USAID’s Suspending and Debarring Official in 2018.”

The spokesperson said the administrative agreement “was the result of a referral from the Office of the USAID Inspector General and the Special Inspector General for Afghan Reconstruction, which found significant weaknesses in the university’s operations, fiduciary oversight, and internal controls.”

The spokesperson said USAID’s leadership has “strongly encouraged the university to diversify its funding sources” and to apply for competitive grant funding through the Advancing Higher Education for Afghanistan’s Development (AHEAD) program, which is administered by USAID. Sedney said the university has applied for the funding.

“AUAF’s Board, not USAID, has the fiduciary responsibility to make decisions regarding the future of the university, which is an independent entity,” the USAID spokesperson said. “The U.S. government has emphasized regularly to the management of AUAF and its Board of Trustees that they must exercise this responsibility, to ensure the university’s overall financial health and sustainability, as is the case with any other nonprofit organization.”

Thomas Barfield, the president of the American Institute of Afghanistan Studies, a scholarly group that has its Kabul headquarters at the AUAF campus, discounted the talk of competitive funding.

“It’s hardly that they’re waiting to see if there another great university that also has a large campus and program and they’ll decide between the two,” said Barfield. “This is an American flagship project, and they either fund it or they don’t.”

Barfield, who is also a professor of anthropology at Boston University, said AUAF, which was backed by First Lady Laura Bush in its early years, “probably lost much of the political clout it had earlier on, and it became one of [US]AID’s projects. If you have the first lady behind you, that’s really different than if you are just one of [US]AID’S educational projects.”

Barfield said the accounting problems at AUAF described by SIGAR are common for American projects in Afghanistan. But unlike with many other projects, he said he has not seen evidence of waste, abuse or fraud at AUAF. He thinks it would be a mistake if funding for AUAF were allowed to lapse.

Ahmadullah Azadani, a member of AUAF’s student government association, has called for the U.S. government to continue funding AUAF.

“Many think the university is being politicized, linking the recent news regarding funding troubles with the Trump administration’s efforts to withdraw U.S. troops from Afghanistan, and shrink the financial expense called for by involvement in Afghanistan,” Azadani wrote in an opinion article in The Diplomat. “But cutting money without providing alternatives for educational purposes will damage the United States’ reputation gravely. It will demonstrate U.S. irresponsibility and faithlessness, leaving AUAF dangling.”

Sedney said AUAF administrators and board members are actively working to ensure funding is in place for 2020 and beyond.

“We continue to reach out to a wide range of funders, and we continue to get support both from the U.S. and internationally, as well as Afghans,” Sedney said. “We do get support, but it’s unfortunately not at the scale that is necessary to cover the cost of operations and security.”

“We remain optimistic that we will get the funding that we need to continue, as we have for the last 13 years,” Sedney said.