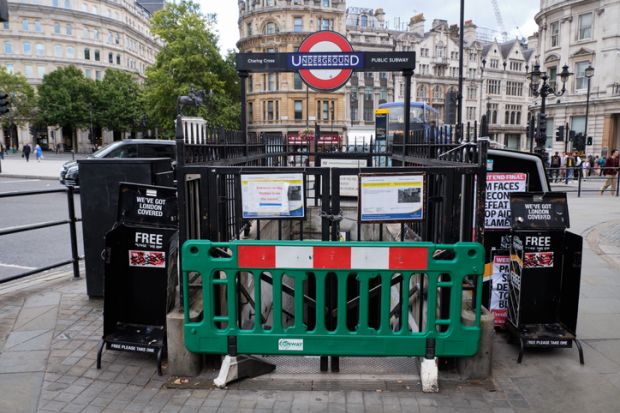 About 180 international students have been unable to start their courses at a private university that “paused” its recruitment this month because of financial problems, with some having arrived in the UK before they received the news.

Richmond, the American International University in London, said earlier this month that it had suspended recruitment for students scheduled to start in January. The university said it had been unable to “secure a long-term funding alternative” after the death of its founder, Sir Cyril Taylor, in 2018 – but it is still recruiting students for its autumn intake.

One international student who was scheduled to start this month told Times Higher Education that the university sent an email warning them not to travel to the UK just hours before their flight departed, and they did not read the message until after arriving in London.

The student, who asked to remain anonymous, had meetings with Richmond staff, at which details of the recruitment “pause” were confirmed, and then spent several days “roaming around London” in an unsuccessful search for an alternative university.

The student, who has now returned home, said they had sought medical help for stress caused by the situation, and went on to describe being “so shocked they [the university] haven’t helped us, [and] have left us in a dilemma”. Despite having received a refund on their fees from Richmond, the student estimated that they were still about £3,000 out of pocket, taking into account the cost of visa fees, flights and travel and accommodation in the UK.

The student – who questioned why the university had not given earlier warning of the impact of financial problems – said they have been offered the opportunity to start their course in the autumn.

But the student said they had left their job to start the Richmond course in January. “I don’t have a job now. I’m totally mentally stressed. I don’t know what to do,” they said.

The number who arrived in the UK was in “single figures” and “they were able to access personal, one-to-one on-campus advice and support, as well as telephone support”, he said. Richmond had been “able to assist many students to transfer to other higher education providers in the UK”, Dr Deans said.

Dr Deans added: “Deciding to pause recruitment was a very difficult, but prudent, decision, which we did not take lightly, and we are sorry for the inconvenience and stress it has caused some people.

“We were in immediate direct contact in December with all domestic and international students affected, [and] we remained open over the Christmas period, offering a range of information and assistance, including advice on travel, visas, transfers and financial reimbursement. All reimbursements have now been paid where the students have submitted their supporting documents.”