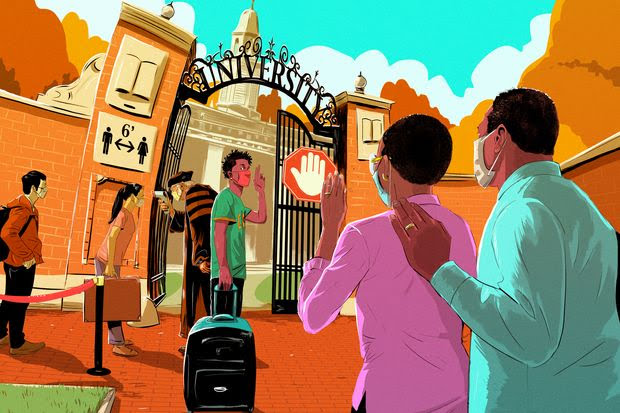 After her son John was admitted to Amherst College last December, Michelle Fitzhenry thought dropping him off to start his freshman year would be a family event. She and her husband, Jim, had planned to fly with him to Massachusetts from Portland, Ore., in August, spend a couple of days shopping for dorm essentials and then help him move into his room, meeting his new roommate’s parents and staying around for dinner.

The plan now? To get in and out as fast as possible.

“We’ll slow the car down as we go by so he can jump out the back,” she jokes.

College drop-off—that emotional ritual that has spawned many a meme of weepy moms clinging to their child’s legs—is the latest coronavirus casualty. What had morphed into an all-day occasion in recent times, with family picnics, informational sessions for parents and matriculation ceremonies, will be a mostly students-only, efficiency-oriented process this year.

Due to safety protocols, many colleges aren’t allowing parents in the dorms, or, in some cases, even on campus. Move-in dates have been staggered over multiple days, to allow students to keep distant, with specific time slots allotted. Some schools are limiting the number of suitcases students can bring with them, asking that everything be shipped ahead to reduce trips in and out of the residence halls. Many students will be tested for the virus immediately upon arrival and quarantined as they await results.

The changes have created a travel conundrum. With move-in dates often unconfirmed, many parents have been booking rooms at multiple hotels for extended periods to make sure they’re covered. Concern about the safety of air travel is leading some people to drive instead of fly, sometimes cross-country. Quarantine rules in some states, which require isolation periods for visitors, have families sending students off to college on their own.

“It’s a huge deal. I’m kind of numb. I don’t know how I’m feeling about it,” says Tami Levy, whose daughter will be a freshman at the University of Colorado Boulder. With no concrete move-in date, Ms. Levy has proactively booked a hotel room for a whole week, figuring she would cancel the nights she doesn’t need as soon as she knows when they have to be there.

She hasn’t made a flight reservation for herself, even though airfares go up every time she looks, because she isn’t sure if her younger children will be starting school at home and will need her there. If there’s no school, she will rent a truck, and the whole family will drive the 14 hours from their home near Deerfield, Ill. “It feels safer than flying,” she says. She booked her husband a flight just in case, figuring he would be the one to go to Colorado. Since only one parent is allowed in the university’s residential hall at a time, she figures he will have to handle the heavy stuff.

Basma Elfandaki has also had to change plans. She had signed up to spend her sophomore year living on campus at American University in Washington, D.C. Then the university announced a reduced density plan that only allowed single dorm rooms and gave priority to first-year students. Ms. Elfandaki found an off-campus house to share with friends, but it cost her about $4,000 more for the year than dorm living, which means she will have to take on additional tutoring work during the school year.

Since she now needs to bring furniture to Washington, Ms. Elfandaki will rent a U-Haul to drive from her home in New York. Before she left for school, she was planning on spending a couple of weeks with her mother, who has been in Vermont since March when the family she works for moved there from the city. Now that she has to go earlier, Ms. Elfandaki will only get to see her mom for one day. “It’s stressful,” she says. 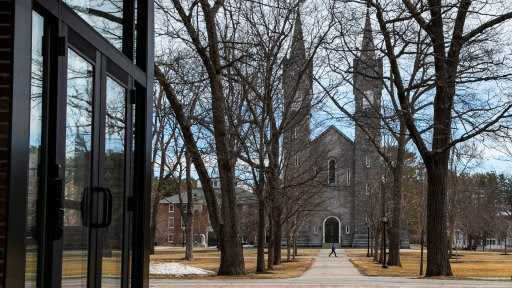 As the summer goes on, the stress has increased. Parents are confused about how to navigate the quarantine policies for states that require out-of-state visitors from viral hot spots to self-isolate. Some are considering flying into a nearby state that isn’t on the list and staying there for a few days before drop-off. Others are planning on spending only one night, calculating that as long as they just stay in the car and their hotel room while they are in town, they will not be violating quarantine rules. (In New York, for example, travelers are allowed to leave the state before the expiration of the 14-day quarantine period).

Others are looking to avoid the dorm move-in process altogether and find accommodation elsewhere. Graduate Hotels, which has 22 properties in university-anchored cities, says more than a dozen students are booked to stay for the whole fall semester at its hotel in Bloomington, Ind., home to Indiana University’s flagship campus, paying an average of $100 a night. Graduate’s president, David Rochefort, says the group is in conversations about potential semesterlong stays with students at 10 other locations, including Athens, Ga.; Eugene, Ore.; and Nashville, Tenn., among others.

What plans are you making around dropping off your child at college? Join the conversation below.

For the Fitzhenry family, the dorm is the best option. Ms. Fitzhenry says she likes that every student at Amherst will have a single room and that the density in residence halls will be reduced from the usual levels. As the family was told in a Zoom call earlier this month, students will only be allowed entry into their assigned hall and will not be permitted to have any guests in their residence halls.

That doesn’t mean move-in will be easy. The dates haven’t been determined, because they will depend on quarantine rules in Massachusetts at the time, so the Fitzhenrys have booked a room at a nearby hotel for a two-week period. And the college’s decision to suspend its annual Family Weekend in October means more canceled travel plans. “It will all be hard. I’m not going to pretend it’s not going to tug at my heartstrings,” says Ms. Fitzhenry.

Elizabeth Hutchins isn’t worried about drop-off: her twin sophomores will drive themselves to Bates College in Lewiston, Maine, and Lafayette College in Easton, Pa., this year. What concerns her is when they return home to Manhattan for Thanksgiving, possibly bringing exposure to the virus with them. Ms. Hutchins isn’t sure if the twins will have to quarantine in their rooms for 14 days. “Do I feed them a leg of turkey under the door?” she asks.