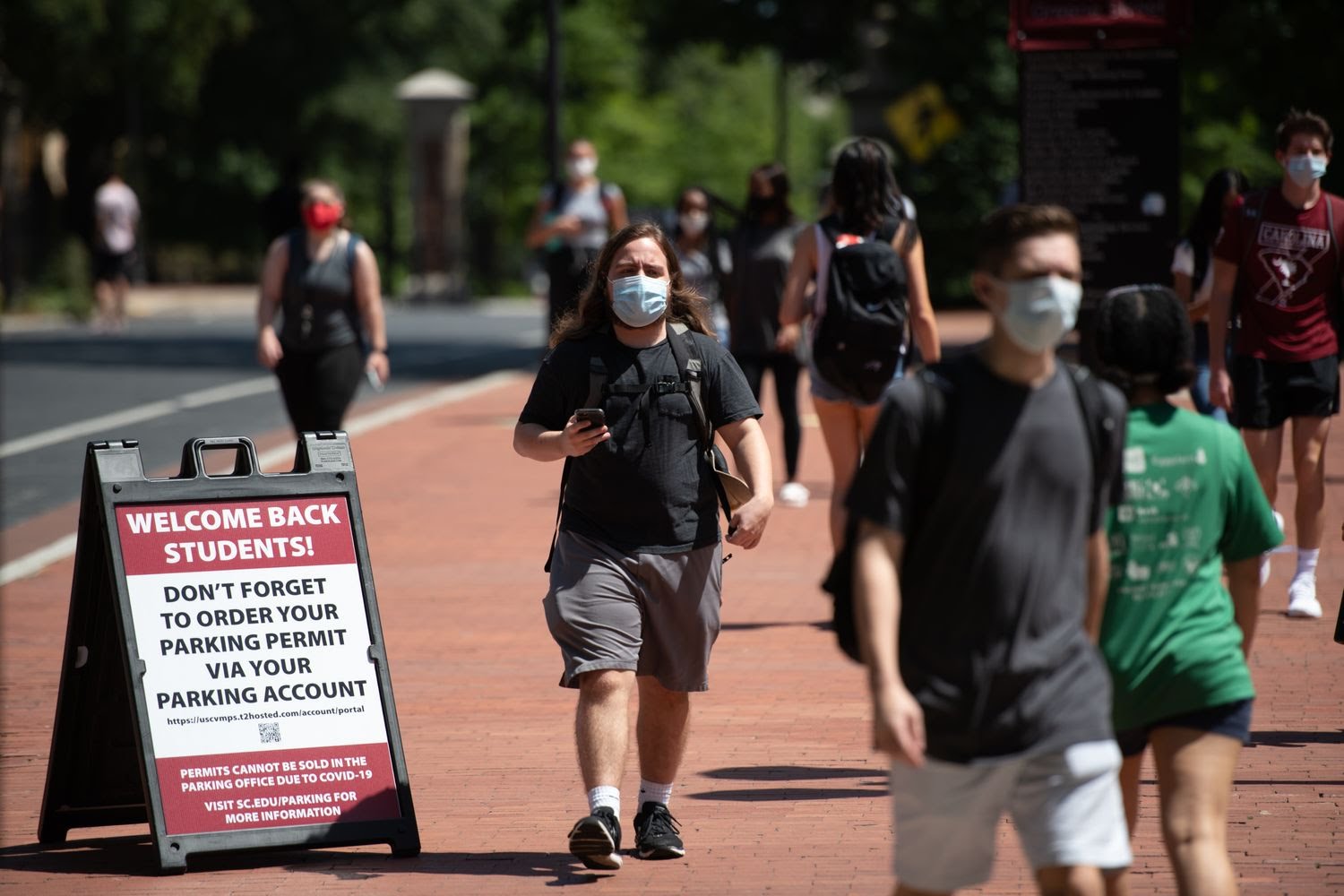 About 20 percent of colleges plan to open exclusively or primarily in person, according to a tracker from Davidson College in North Carolina.

Frightened students quarantined in dormitories or locked down in hotels. Instant suspensions for not social distancing. Regular tests of residence hall sewage.

American colleges are a mess right now. And public health experts and school administrators are still deciding whether the best strategy is to forge ahead with in-person instruction, send kids home with a Zoom syllabus and risk spreading the virus, or shelter them in place. The last option could be a potentially miserable experience for a teen riding out the pandemic alone in a dorm with ramen noodles and Pop-Tarts.

President Donald Trump has demanded that colleges reopen, with minimal guidance from the federal government on how to safely bring students back or what to do when infections are found. Administrators confronted with thousands of positive cases are improvising on the fly, trying to both prevent new flare-ups and keep the disease from spreading beyond their walls.

“I don’t think there are two universities that have the same protocol,” said Irwin Redlener, director of the Pandemic Resource and Response Initiative at Columbia University. “It’s national chaos.”

The stakes are huge, affecting not just the higher education system but possibly the course of the pandemic if enough schools opt to close and send thousands of asymptomatic youths back to their hometowns and families.

“I think school transmission is going to be driving hot spots for the next couple of months in a lot of places,” said James Lawler, a global health expert at the University of Nebraska Medical Center. “It’s a Catch-22.”

About 20 percent of colleges plan to open exclusively or primarily in person, according to a tracker from Davidson College in North Carolina, while about one-third are primarily or exclusively online.

To keep the virus at bay, some schools are turning hotel rooms into quarantine dormitories, sending scratch-and-sniff postcards to campus denizens and hunting for Covid-19 in the sewage systems.

At the University of Arizona, officials say they prevented a big outbreak by testing dorm wastewater and finding hints of the virus that allowed them to target their testing.

Duke University, where less than 1 percent of Covid-19 tests are positive, plans to conduct regular surveillance testing and suspend the dorm key cards of students who don’t show up.

But other schools have been more lenient, offering only sporadic testing and putting the onus on students to self-report.

Just a few miles from Duke, the University of North Carolina-Chapel Hill, didn’t test returning students and within two weeks had to switch to remote instruction, following hundreds of positive tests. Students without symptoms were not tested before leaving campus, despite estimates from the Centers for Disease Control and Prevention that show 40 percent of those infected are asymptomatic. Some studies suggest that figure may be nearly twice as high for young adults.

The University of Iowa and the University of South Dakota, both in states that have seen a recent surge of cases in the general population, are only advising students to get tested if they have symptoms or have been exposed to someone with a confirmed case of Covid-19.

The University of Iowa this week reported more than 900 students had tested positive. Officials there warned they’d impose unspecified additional safety measures if the positivity rate does not flatten.

The University of Arkansas, where there are more than 600 active cases, on Friday banned all nonacademic gatherings of more than 10 people. The news comes as the state reported a record number of new infections.

Gov. Asa Hutchinson said there are no plans at this point to send students packing.

“The last thing you want to do is send students home,” he said. “That would add to the spread as opposed to being in an environment where you can put restrictions in and guide behavior.”

As of Friday, at least 51,000 students have been infected and thousands more are quarantined, according to a survey from The New York Times. Public health experts fear the numbers could surge when the weather turns cold, forcing students to spend more time indoors where the virus can spread more easily .

Experts caution that mass testing of student populations needs to be done as part of a larger strategy with contact tracing and isolation in order to prevent outbreaks.

“Testing is very important, but it has important limitations,” said Tom Frieden, the former CDC director in the Obama administration. “It’s only as useful as what gets done with the testing results.”

Some schools have hired their own contact tracers and isolated infected students in hotels. But that plan doesn’t account for what happens afterward, said Tom Inglesby, director of Johns Hopkins University’s Center for Health Security.

“There isn’t a good strategy beyond that,” he said. “Unfortunately, that does mean people going home and bringing the virus with them.”In the unfolding pandemic, economic crisis and reckoning on race, governors and mayors are shaping our shared future. Who are the power players, and how are they driving politics and influencing Washington?Full coverage »

But some institutions like the University of South Dakota are allowing students to decide. A university spokesperson said the vast majority of on-campus students who are quarantining have chosen to do so at home. The roughly 300 infected students at West Virginia University, where fewer than 2 percent of tests are coming back positive, can remain on campus in an isolation housing unit, self-isolate or isolate at home.

William Hanage, an epidemiologist at Harvard’s school of public health, said he is particularly concerned about the schools unwilling or unable to do mass testing, because they won’t likely detect an outbreak until it is too late.

“By the time you become aware of the problem it is likely to already be much larger,” he said. “You are not going to detect outbreaks if you don’t look for them.”

Many of these dilemmas stem from a lack of clarity from the White House about the best path forward.

“Certainly the thing that has made it difficult is the guidance has changed,” said Anita Barken, co-chair of the American College Health Association Covid task force. “Trying to adapt your model to be consistent with the latest information and the latest guidance is frustrating.”

Daniel Fick, the campus health officer at the University of Iowa, said he consulted with the CDC and state health officials and said there are no recommendations for testing large groups of people who aren’t showing symptoms.

But Birx said on a call last month that each school should be able to conduct “surge testing.”

Universities are also wrestling with how to protect vulnerable students and staff, including minority populations who have been disproportionately affected by the coronavirus pandemic. The American College Health Association developed guidance for how schools can support people of color, low-income students and other vulnerable groups, including targeted outreach, expanding access to health and telehealth services.

CORONAVIRUS: WHAT YOU NEED TO KNOW

And with data showing that Black people in the U.S. are dying at more than twice the rate of their white counterparts during the pandemic, there is growing concern about the safety of Black students and staff on campuses experiencing a surge in cases across the country. Many private HBCUs have opted for online-only classes this semester.

Compounding matters is the fact that many universities are in cities and states with relatively loose rules around social distancing, offering students plenty of places to congregate and potentially spread the virus.

Tuscaloosa Mayor Walt Maddox had to close the bars last month after infections surged at the University of Alabama. So far, more than 1,200 students and 166 faculty have tested positive and more than one-third of the school’s isolation space is occupied, according to the university’s Covid-19 dashboard.

Experts say the variable conditions are a reflection of the broader U.S. response and expect more islands of disease when the season changes.

Joanne Kenen contributed to this report.