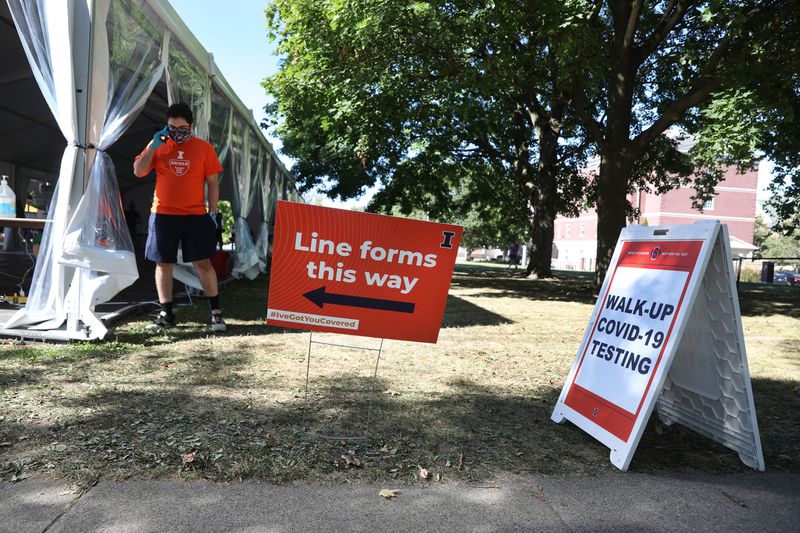 In an early glimpse of the coronavirus pandemic’s effect on college enrollment, some Illinois universities are seeing declines in international students and freshman class sizes but also a higher number of graduate students, who are taking advantage of online programs.

At the University of Illinois at Urbana-Champaign, the state’s largest college, undergraduate enrollment fell by about 350 students from record levels last year, the school announced Wednesday. The freshman class size also dropped by about 1.8% to 7,530 students, the school said, and an additional 277 students deferred admission compared with about 60 in a typical year.

“This year’s new freshmen have endured so much uncertainty regarding their college choice,” said Andy Borst, director of undergraduate admissions, in a statement. “We are pleased that so many students decided to enroll this year, and we will continue to work with the students who asked to delay admission so they can join us for a later term.”

But the losses were offset by an increase in graduate students, many of whom are taking online courses, with total enrollment growing to 52,331, a new record.

Citing the pandemic, UIUC said about 576 international undergraduate students discontinued their studies for the fall 2020 semester. Most new international students are taking classes online, with freshmen from China rising by 3.9%.

Other Illinois colleges also reported losses in international students, attributing the declines to challenges from the pandemic.

“The American consulates were not open in many countries. Students were not able to go and get the visas even though they had been admitted,” said Meera Komarraju, provost and vice chancellor for academic affairs at SIU Carbondale.

Across all University of Illinois schools, which include campuses in Chicago and Springfield, total enrollment reached 90,343 — a new record for the eighth straight year, according to system President Tim Killeen. But undergraduate enrollment saw a net decrease of 177 students to 58,258, according to a news release.

“Even in a year of historic challenges, enrollment grew to another all-time high,” Killeen said in a news release that framed the progress against the financial pressures wrought by the COVID-19 pandemic.

Killeen also credited the University of Illinois’ innovative saliva test, which is screening people on campus for COVID-19, for the success in attracting students despite the uncertainty of recent months.

The University of Illinois at Chicago also broke its enrollment record, set last year, with 33,518 students taking classes this fall. More transfer students enrolled, driving an increase in the undergraduate population, but the freshman class size dropped by about 20% to 3,541.

“Our continued enrollment growth demonstrates that we are providing an accessible and affordable world-class education at Chicago’s only public research university,” UIC Chancellor Michael Amiridis said in a statement.

In response to the pandemic, many colleges are offering a combination of in-person, hybrid and remote classes. The student body is typically counted on the 10th day of classes and sent to the Illinois Board of Higher Education to be double-checked. IBHE will release figures for the state’s 12 public universities in October, an agency spokeswoman said. Some schools release their numbers earlier.

At Illinois State University in Normal, overall undergraduate enrollment and the freshmen class size was down, according to new data. School officials characterized the figures as strong despite the 0.8% decline in total enrollment, bringing all attendees to 20,720. A big loss came from freshmen, with about 500 fewer students this fall compared with last year, when ISU saw its largest freshmen class in 33 years. Freshmen amounted to 3,353 students this year while graduate student enrollment increased by 4% — the fifth consecutive year of growth.

Northern Illinois University in DeKalb celebrated gains in overall enrollment and an 8% boost in freshmen, bringing that class to about 2,047. Total enrollment for fall reached 16,769, an increase of about 160 students from last year. NIU’s College of Law also saw an increase of 12% with 33 more students enrolling.

At SIU Carbondale, freshmen and new student enrollment jumped significantly, though overall enrollment fell by 2.8% from fall 2019 to 11,366. Still, the drop was much less than in any of the previous four years, when declines between 8% and 12% have been reported, and leaders are optimistic the school is turning the corner. The number of new students enrolling increased by about 31%. Most are freshmen, though some come in with enough credit to begin as sophomores or juniors, spokeswoman Rae Goldsmith said.

Northwestern University, the University of Chicago and DePaul University said their numbers were not finalized since classes had not begun by Tuesday. Loyola University Chicago reported a 500-student drop in freshmen enrollment compared with last year, bringing the total number of first-year students to 2,137, according to a spokeswoman.