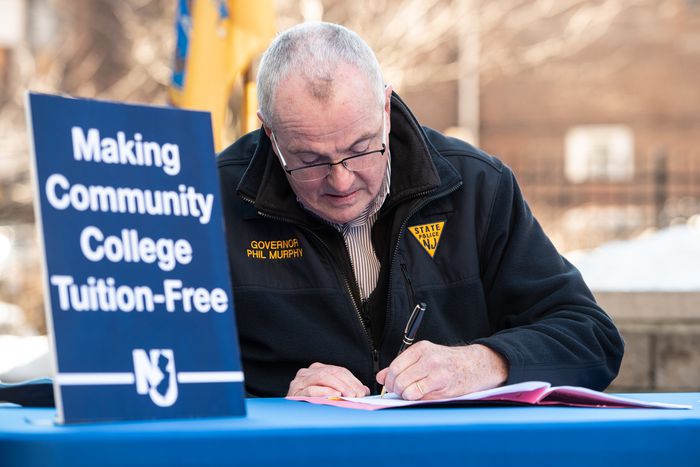 A program that offers thousands of low- and moderate-income students in New Jersey the opportunity to get a tuition-free education at the state’s community colleges is now permanent under a law Gov. Phil Murphy signed Friday.

Currently, only students from households earning earning $65,000 or less qualify for the program, which has gone up from $45,000 under Murphy’s first state budget in 2018.

It’s a “last-dollar” program, meaning the grants cover any tuition and fees that remain after a student used all other grants and scholarships available to them. It’s available to these students for up to five semesters.

The initiative, officially called the “Community College Opportunity Grant Program,” was one of Murphy’s key campaign promises — part of the Democrat’s vision of making the Garden State more progressive. He has included money for it in each of his four state budgets.

Murphy’s latest state government spending plan, a $44.8 billion budget introduced Tuesday, includes $27 million in taxpayer money for the program, which is available at all 19 of the state’s community colleges.

The measure (A4410) he signed Friday enshrines the program into law.

“From day one, our commitment as an administration has been to ensure no deserving student should be shut out of a future that a community college education can help because of a tuition bill,” Murphy said during a ceremony Friday morning at Hudson County Community College in Jersey City.Nobody knows Jersey politics like NJ.com. Add your email now and don’t miss a story.

Murphy said the program helps students who have either had to “slow down their degree” or stretch it out over years because they had to work multiple jobs or couldn’t afford to go to school full time.

“I have heard gut-wrenching testimonials from students who didn’t think they would be able to go to college simply because they did not have the funds to do so,” state Higher Education Secretary Brain Bridges said Friday.

Enrollment in the program has grown by more than 140% since 2019, according to a state budget summary from Murphy’s office.

Still, the eligibility threshold has been low enough that many people who are eligible already had much of their tuition covered by existing grants and scholarships.

The Democratic-controlled Legislature voted along party lines to pass this bill. It drew opposition from Republicans, who have repeatedly warned in recent months that Murphy is increasing spending despite borrowing billions of dollars to help offset losses during the coronavirus pandemic — a move they say will lead to higher taxes and financial issues for the state further down the road.

State Sen. Teresa Ruiz, D-Essex, said this program has provided “represents a monumental step towards a more equitable higher education landscape by ensuring an associate’s degree is accessible to all New Jersey residents regardless of their economic status.”

Other lawmakers noted the program’s significance as the cost of college tuition continues to rise.

“A college degree has become the standard for entry into many industries and workplaces, but too many students must take on enormous debt in pursuit of higher education and a successful career,” state Assembly Majority Leader Louis Greenwald, Assemblywoman Mila Jasey, and Assemblyman Daniel Benson, all Democrats, said in a joint statement.

Murphy’s new budget proposal also revives plans to allocate $50 million to offer two years of tuition-free education at Rutgers, Rowan, and other public colleges and universities for students from households of $65,000 or less. Murphy originally proposed it in the state budget for the current fiscal year, but, but it was nixed because of the coronavirus pandemic.

The governor and the state Legislature have until June 30 to negotiate a final budget.

Thank you for relying on us to provide the journalism you can trust. Please consider supporting NJ.com with a subscription.